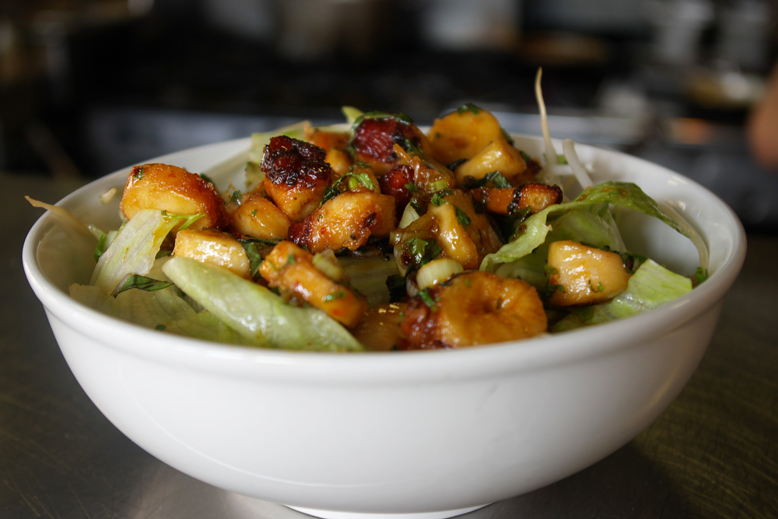 Of all the seafood consumed in western cuisine, octopus has gotten a bad rap. And not surprisingly either; the octopus holds a great deal of mysticism for many of us. It is undoubtedly one of the more mysterious creatures of the sea (their ancestors date back over 200 million years).

And along with its prehistoric features (having eight arms, three hearts, no internal skeleton, and the ability to change colours and expulse ink in times of retreat) octopi are not the easiest to work with in the kitchen. Nonetheless, for many cultures around the world, octopus has long been regarded as a delicacy. Mediterranean, Italian and Japanese cooks, for instance, favour having it on the menu. Recently however, as the west coast consumer focuses more on eating sustainably, octopus has been finding its place on to the plate.

As a highly nutritious and locally sourced product, you can expect to see octopus surfacing in restaurants more often. Chefs are getting bold with it too — long gone is the classic “calamari” style, slathered in flour and deep fried. Instead, octopus is now being served marinated in salads, confit dressed, char grilled, in pasta, or in risotto.

Being a by-catch of spot prawn fishing, the Pacific octopus is a hit or miss food. It all depends on whether they happen to be in the area at the time when prawn season takes place (May-June). Fortunately, octopus freezes well and freezing increases the tenderness. Even still, it’s an unpredictable catch so look for it year round (if available) in these following locations:

Where to buy octopus:

Find it on the Menu: 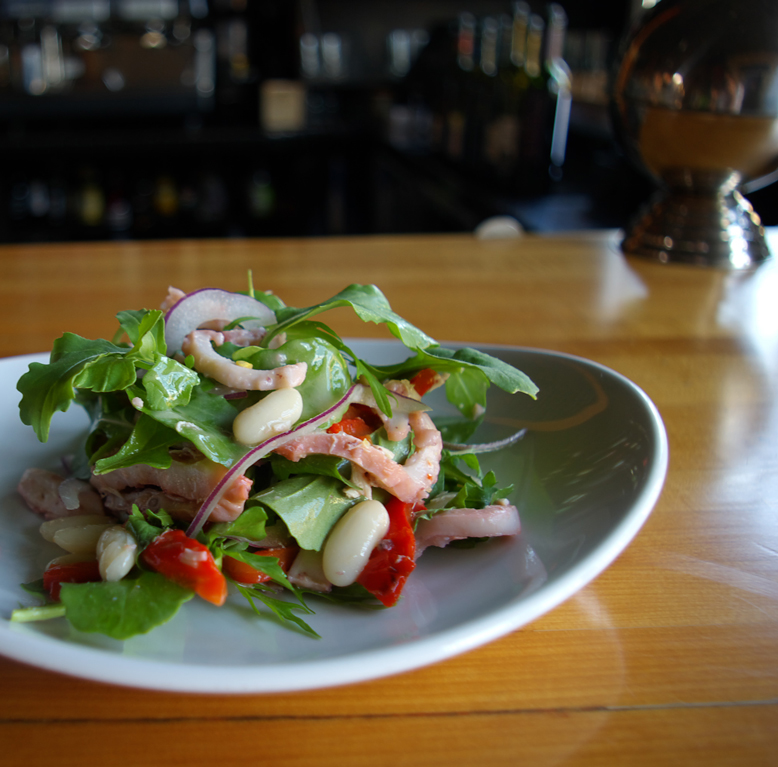 Foo Asian Food: Foo has had the Octopus Salad on their menu since day one. It’s sweet and spicy, fresh and full of flavour. Braised and slowly simmered until tender flash fried and dressed in a sweet chili glaze and served with thai basil, cilantro, lettuce, bean sprouts in a lime chili dressing. $11

How to prepare octopus:

Chef Brad from Ulla showed me how he’s been cooking octopus on his menu:
From the freezer (purchased from Finest at Sea), it’s lightly blanched and then added to the pressure cooker with a basic mirepoix (celery, onions, carrots), brought to a boil and set to a full pressure for 20 minutes. The hood of the octopus is salted, sugared and smoked into “bacon.” After the pressure cooker the octopus is sliced thin, brushed with olive oil and placed on the grill for about 3 minutes a side and then it’s ready to plate.

“Octopus is truly a world class product” says Brad. If you want to try something new, best to try octopus at a restaurant first. Always trust the chef. You’re not going to end up with anything chewy and unpalatable [at Ulla]. This is a composed, light octopus dish, perfect as a starter to your meal. Octopus is a great local product that truly expresses the full spectrum of the ocean,” says Brad.

Thus, despite its primitive features and particular cooking requirements, when handled correctly and cooked just right, octopus is a highly flavourful, delicate and tender food. Support your local economy. Eat an octopus.

November | December issue on the stands. Read ...
Read More
For the ninth year in a row Rancho Vignola is setting up its Vancouver Island Harvest Sale here at the Mary Winspear Center in Sidney. Many of ...
Read More
Season’s Greetings EAT readers! We at EAT are looking forward to all the wonderful seasonal baking on offer around the city. One of the great joys ...
Read More
Masterclass Candied Citrus Holiday ...
Read More
Tucked into the north end of the Golden Mile benches, on some particularly choice dirt (part of the Reed Creek alluvial fan), and between the driving ...
Read More