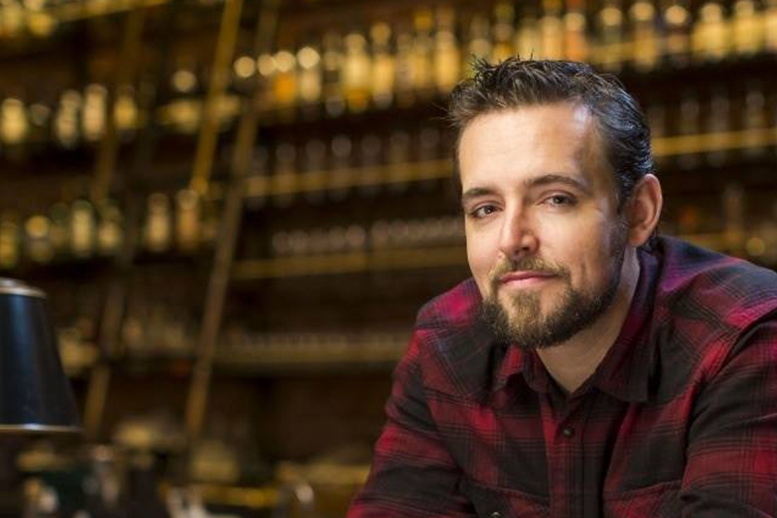 Death Cab for Cutie’s new album Kintsugi once again echoes their Pacific Northwest roots, including the verse from the song Black Sun, “There is whiskey in the water, and there is death upon the vine”. While the band calls Seattle home, the whiskey obsession they’ve inadvertently touched on has spread to Victoria and all the way to Oregon. Portland’s enthusiasm is embodied by the Multnomah Whisk{e}y Library.

Jordan Felix, Multnomah’s bar manager, is our next Houseguest guest. He brings his cocktails to Olo Restaurant on Sunday, May 17th, for “Portland Whiskey Cocktails” – Cocktail selections from Jordan Felix with Shawn Soole and a family-style meal from Chef Bradley Holmes. There will be two seatings at 5:30 PM and 8:00 PM. Tickets are $60 and available at leftcoasthouseguest.com

I spoke to Jordan on the eve of a busy weekend for bartenders across the country—the Kentucky Derby and the Mayweather versus Pacquiao match. He was also finishing up Multnomah’s monthly inventory, a big feat considering they boast 1600 different spirits, including 940 whiskey varieties.

K: How did you get your start in restaurants?

J: I’ve been in the industry since I was 15 years old. I worked at a Mongolian restaurant during high school. I served part-time during college. I’m originally from Melbourne, Australia. I moved straight to New York, where I had the fortunate opportunity to work with Danny Meyer at Blue Smoke. From that point on, I sensed I was in it for life. I had my first ever bar shift at Blue Smoke in 2005 and I got hooked. I went back to Australia and managed a Japanese restaurant for three years and a speakeasy for another two. And then I went back to New York to manage a bar. A year ago, I moved to Oregon. My dad lives out here, I moved to help him, and I ended up staying.

K: As a bartender, why do you think whiskey so popular?

J: Whiskey is a distilled spirit from grain and it’s relatively easy to produce. It’s not too sweet. Many are full-bodied, with lots of spice. It offers so much to cocktails.

K: For those who don’t drink whiskey, what’s a good way to develop an interest?

J: This is where cocktails should come into play. A good example is the Ward Eight cocktail. It’s an old drink devised in Boston, a variation on the whiskey sour. It combines rye whiskey with fresh lemon, orange and grenadine. Those pomegranate flavours in the grenadine can mask the harsh whiskey flavour.

K: I have to ask about the whiskey library. I’ve heard it’s very exclusive.

J: It’s an elevated mode of service. It’s all seated, no standing room. We have cocktail carts that come out to each table. Every week we do a two-hour education class with our staff. We want them to be the most knowledgeable in town. It’s about the service.

On Monday night, we don’t take reservations, not even for our members. We have a core membership group that pays an annual fee. Space after that is given to the general public. It’s a place to take someone special. Portland doesn’t have a ton of high-end options, it’s a place good at doing things for really good value.

K: What do you have planned for Olo?

A: It was funny, I had never heard of this before, but I was also wondering what was going to happen with Olo. I hadn’t heard anything from their chef and I asked if I should pair the drinks to the food. They said it’s my show. I’ve never done that before. I’ve always worked with the food at the front, drinks secondary.

So my drinks are pretty playful. Two are shaken, and two stirred. One uses gin, kiwi fruit, a little bit of fresh apple liquor, and absinthe. I’m also making a punch with Canadian whiskey, cognac, fresh lemon, and green tea.

K: Were you inspired by Victoria?

J: This trip is going to be my first time in Canada; I’m really looking forward to it. I’m very honoured to come up and participate.

Sponsored in part by EAT Magazine and On The Left Coast

Strange, interesting, and wonderful things can happen in odd times, and there is no stranger time than now, but something needed to be done to pay ...
Read More
Vancouver Island’s deVine Wines & Spirits was delighted to learn its Genever Gin won the Genever category, and a Double Gold medal, at the ...
Read More
Let’s Not Open a Restaurant (June 2017) The first in the magazine’s Eat Talks Series turns into a lively evening of storytelling and truth ...
Read More
Pictured above: Team Joie getting our new outdoor garden beds ready for our on-farm wood burning pizza oven and picnic area “Joie Picnique” From ...
Read More
There’s a modest little place, and it’s easy to miss, downstairs on Yates below a record store and the Odeon, and most people don’t know how to ...
Read More
Having acted as owner of 2% Jazz Coffee for 17 years, it’s safe to say that Sam Jones has this coffee thing down pat. Striding through the doors ...
Read More

The article on L’Apéro in the May|June issue should have stated Chef Andrea Maiolo staged at The Courtney Room and Zambri’s and that he held the ...
Read More
May|June issue on the stands. Read ...
Read More
For five crisp, mostly sunny November days I am treated, along with six other journalists (all from the US) to Quebec City’s culinary charms. We ...
Read More