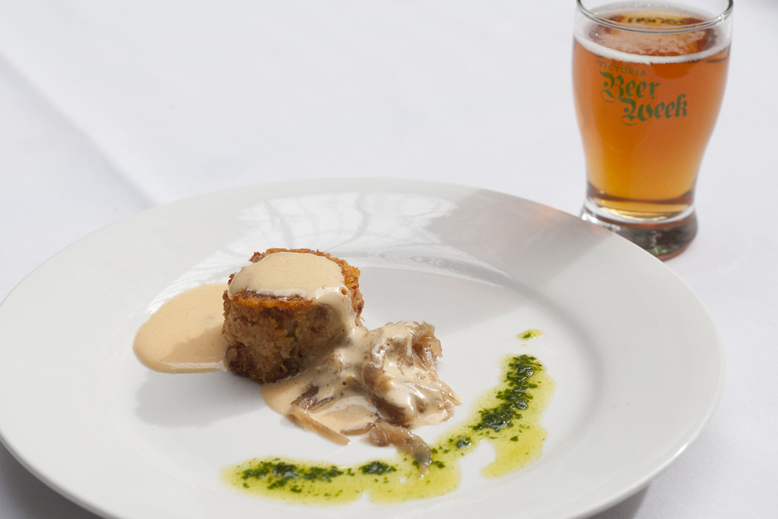 Stereotypes and pop culture often lump beer and game day together, along with relaxing in the summer heat with a cold beer and simple snacks. But beer isn’t just a “cold one” to be chugged with no regard for what food it is being consumed with—the world of beer pairing offers so many different options to choose from, especially with the recent craft beer explosion.

When pairing beers with food, there’s one simple way to get things right. In the spring and summer, pick lighter beers, and in the fall and winter, go for something heavier. Summer beers are generally home runs with most summer meals. Session ales, Pilsner lagers, and lighter Kölsch-style ales all pair well with the best deck or patio foods: salads, BBQs, and fish tacos. Deeper, darker beers like porter, stouts, or barley wine go hand in hand with the layered and hearty flavours of winter. Dig into stews, braises or roasts with a wintry beer in hand, and you’re bound to find a fine pairing.

Any beer with a hoppier profile is a little bit trickier. With their sharper taste and sometimes bitter flavour, these brews are the most difficult to pair. Hoppy beers, however, can work really well with the spicier food spectrum—spicy stir-fries or curries are great with a hoppy India Pale Ale.

As for cooking with beer, I sat down with Dan Hayes, chef at The London Chef (who is teaching the Cooking With Beer class during Victoria Beer Week). “If you are using beer in a recipe, you don’t have to use the same beer as you’ll be drinking,” says Hayes, “and in fact you shouldn’t.” Beer that you would cook with may not necessarily pair well with the same dish when drunk. “Look for less hoppy, malty beers to cook with. When beers cook down they become more bitter.”

So, when it comes to pairing beer and food, have an open mind, and buy two beers of the same kind. Drink one and think about what might taste good with it, and then follow your inspiration to plan the recipe. And if it doesn’t work? So what, at least you got to drink two beers and eat a meal. It could be worse.

There are several food-and-beer events during Victoria Beer Week, including Beer, Pizza, More Beer; Beer, Cheese, More Beer; Drink in the Story; and the Brewmaster’s Brunch.

Colin writes the column “A Beer and A Bite” in EAT Magazine where he explores beer and food pairings.

This article also appeared in the Victoria Beer Week 2015 Guidebook

The article on L’Apéro in the May|June issue should have stated Chef Andrea Maiolo staged at The Courtney Room and Zambri’s and that he held the ...
Read More
May|June issue on the stands. Read ...
Read More
First published in the July/August 2008 issue of EAT With High Country Bison poised to make their excellent, free range bison available in BC, I felt ...
Read More