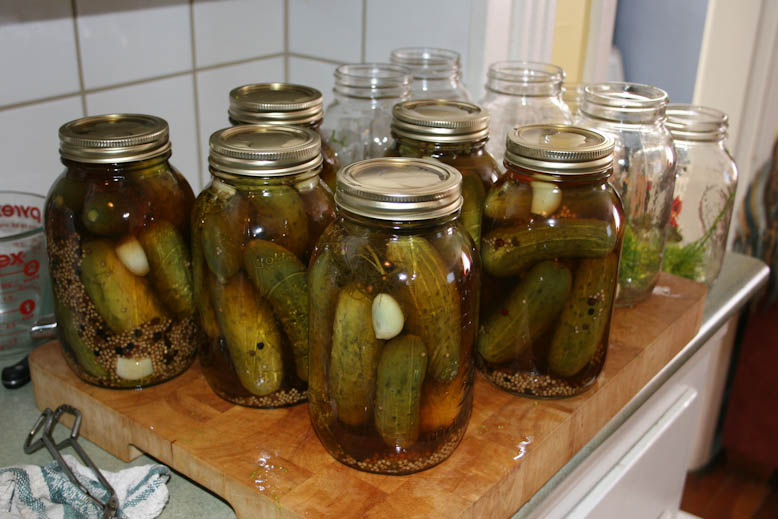 I first started pickling in 2004.  At that time I understood very little about the process.  My first pickles were fermented in pure vinegar and were inedible to everybody except my girlfriend at the time who was a vinegar fetishist and could drink the stuff undiluted.  Over the years my results have improved, and my sense of the process has grown more developed.  I had an extremely helpful conversation with Andrea Braithwaite’s mother at Andrea’s PhD post-defence party and there I learned a bunch of valuable secrets.

If we are talking about dill pickles, Polish style, the secret is all in how the pickle crunches when you bite into it.  Old school pickle makers would achieve this crunch by treating the pickles with alum.  However, the alum can be avoided by packing the pickles in ice for several hours before putting them into the canning bath.  The secret is the timing.  The pickles have to go cold into the jars, get covered in brine, and then be sterilized as quickly as possible.  After this, if properly refrigerated, they will crunch. 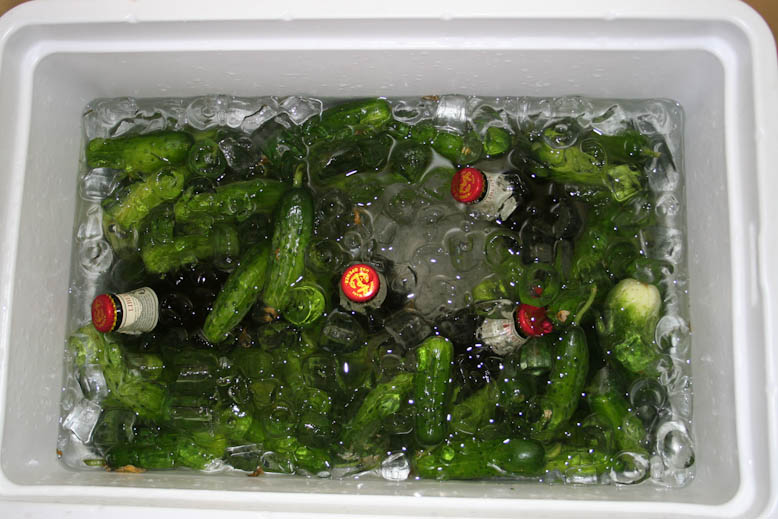 The second thing to consider is the flavour of the brine.  There has to be some mixture close to 50/50 of water and vinegar.  If the pickles are wanted to be tart then favour vinegar slightly, and if they are wanted to be less tart, then either water or sugar will be present in a greater degree.  I realize this all seems vague, but the truth is that experimentation and tweaking are the best ways to understand pickle making once the basic recipe has been absorbed.

As I am new to Victoria, I had all kinds of adventures trying to find the best pickles for the job.  I ordered a batch from one farm and found they were way too large to fit into jars.  Clearly these people had never pickled anything in their lives.  I cut the oversize cucumbers into slices and made them into sweet pickles.  The next week I ordered eleven pounds of pickles from another farm, with a stall in the Moss Street Market.  They were lovely.  It is a pain for the farmers to pick pickling cukes because cucumbers grow fast and so small pickling ones have to be plucked at the right moment. 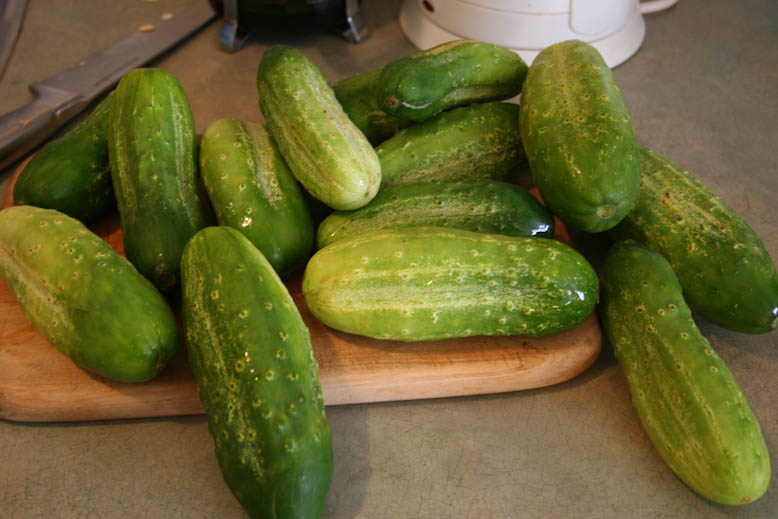 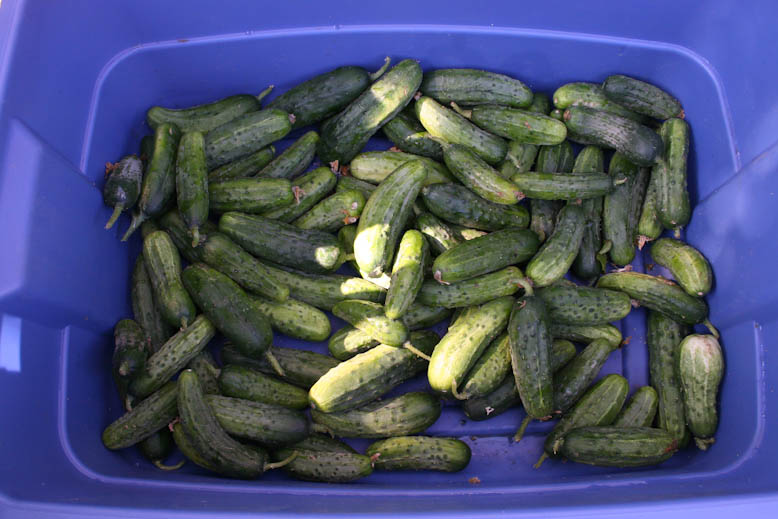 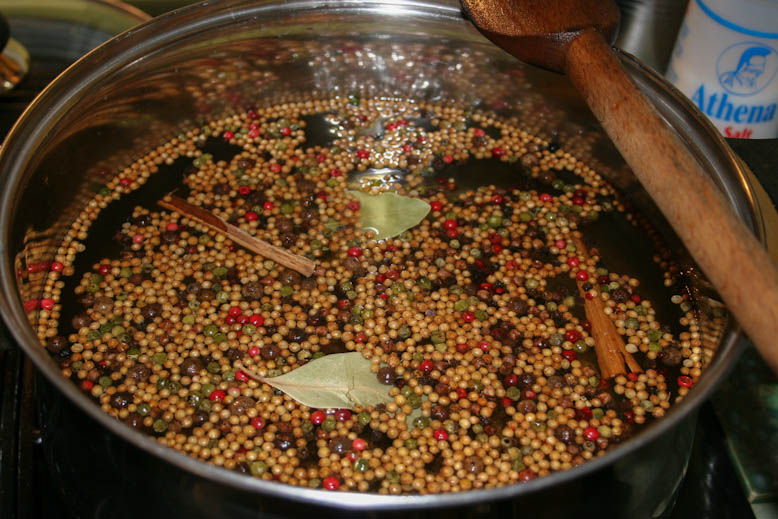 I also found some excellent dill flower at Moss St.  The dill flower not only infuses the most robust flavour into the pickles, but aesthetically it looks best floating in the bottle.  Now that I have completed a batch of dills, and also a batch of sweet pickles, my next mission is to make kosher dills.  Unlike the Polish variety, kosher dills are packed in salt brine and fermented.  They tend not to be crunchy, but they do have their own unique taste and history. 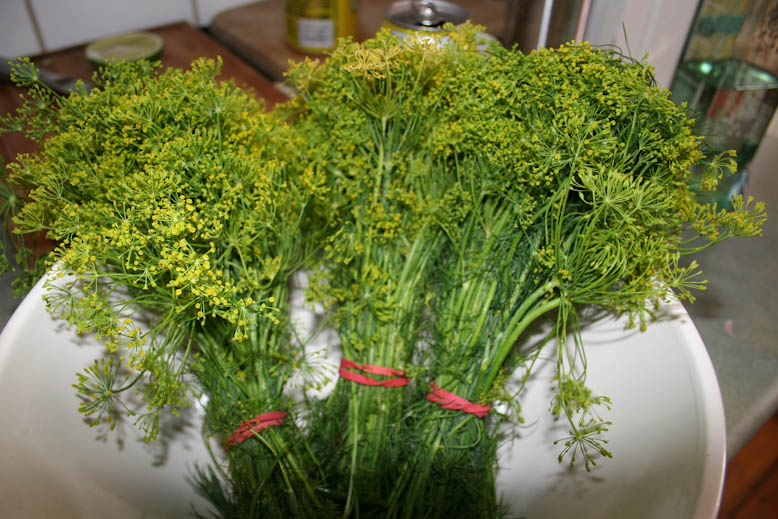 The ultimate point of all this is, of course, to have an autumn pickle and jam exchange.  I will get together a group of people who have been busy with the Mason jars all summer, and we will trade our goods with each other.  It is a great way to socialize and to discover what other people have been packing into jars lately.