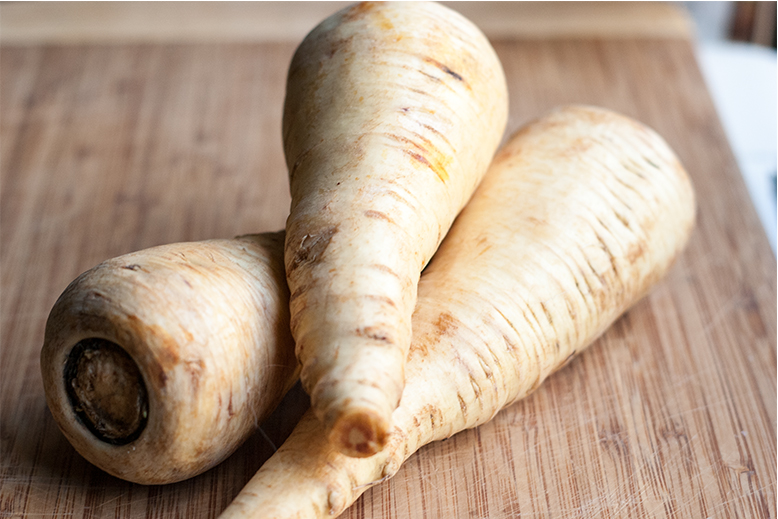 Parsnips are the quintessential cold weather vegetable. They are also, in my opinion, one of the most misunderstood and underappreciated root vegetables, right up there with the turnip and the rutabaga.

Belonging to the Umbelliferae family, which include carrots, celery, fennel and parsley, parsnips carry with them the sweetness of the carrot and the herbaceousness of parsley, while being only slightly starchy for a root vegetable. They look almost identical to carrots too, aside from their creamy-white skin.

People have been eating parsnips for thousands of years. In ancient Rome they were a popular item, often served with honey or in desserts. Though when the drought and disease resistant potato was first introduced, the parsnip took a back seat.

As a cold season vegetable, chefs can access and utilize the parsnip all winter long, often including it in side dishes, soups and stews. It’s the home cook however, that continues to ignore the poor little parsnip.

A surprisingly versatile vegetable, parsnips can be spiced or sweetened; put into in a pot of stew, pureed, braised, or baked as fries. Though, roasting parsnips is my favourite way to showcase this vegetable – roasting brings out the parsnip’s natural sweet nuttiness and that distinct carroty taste.

Look for younger, medium sized and firm roots as the older ones often have a tough woody core. While smaller parsnips can be eaten raw, cooking reduces the slight radish-like pungency and increases the sweetness.

Parsnips can be kept fresh in the crisper for up to three weeks.

Trim and cut away the green parsley like tops (if they are intact) as these are not edible. Scrub the flesh and peel older, more blemished roots (younger parsnips are smaller and smoother and don’t need to be peeled).

Boil them with broth and mash like potatoes with butter, salt and pepper.

If roasting, brush with olive oil, sprinkle with salt and pepper and roast at 400 degrees for 20-25 minutes or until they can be easily pierced with a fork. 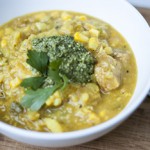 Recipe adapted from The Veggie Belly

While the parsnips and sweet potatoes are roasting, heat a large, deep pot with 1 tablespoon of olive oil. Add the chopped celery, leeks, garlic and bay leaf. Cook on medium-high heat till the celery has softened a little – about 3 minutes. Now add the oregano and wine and cook another 1 minute till the wine bubbles and evaporates. Add the turmeric, and vegetable stock. Bring to a boil. Then lower heat and Simmer for 5-7 minutes. Fish out the bay leaf and discard it.
Add the roasted parsnips, sweet potatoes and water to the stock. Place in a blender and puree into a soup – as smooth or chunky as you like.
Return the soup to the pot, add corn an warm through before serving. Taste the soup and add salt and pepper. Remember, the stock has salt and the chimichurri is salty.

Place all ingredients in a food processor and blend into a coarse paste.

The article on L’Apéro in the May|June issue should have stated Chef Andrea Maiolo staged at The Courtney Room and Zambri’s and that he held the ...
Read More
May|June issue on the stands. Read ...
Read More
This is a variation on a negroni, created for Victoria Spirits by Katie at Veneto. 1 oz. Victoria Oaken Gin 3/4oz.  Dubonnet 3/4 oz. Amaro ...
Read More