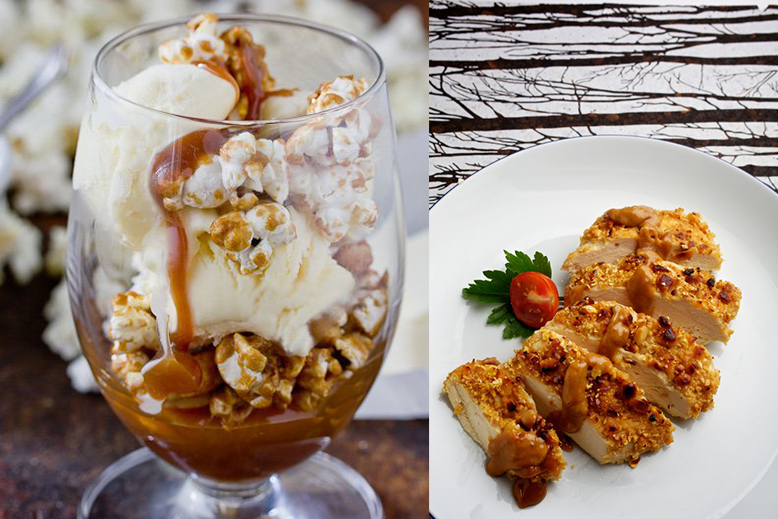 Easy to cook and fun to eat, popcorn is one of the world’s oldest and tastiest treats. It’s highly addictive too. Salty, buttery (and sometimes sweet), popcorn is everyone’s weakness, right down to the last kernel.

The history of popcorn is rich in the Americas, with early discoveries dating back thousands of years. In 1948 researchers found popcorn kernels in a New Mexico cave known as the “Bat Cave,” which were carbon dated to be approximately 5,600 years old. In Central American ancient popcorn kernels have been found on clothing, headdresses and even funeral urns.

Popcorn grew to be the popular snack food it is today with the invention of Cracker Jack, and from street vendors pushing steam powered poppers through carnivals, circuses and fairgrounds.

During the great Depression, popcorn was sold for pennies, being one of the few “treats” people could afford. In the 1940’s when chocolate and sugar were rationed and sent overseas to U.S. troops, popcorn eating increased by three-fold. Popcorn at the movies quickly became a big business.

When television took America by storm in the 1960’s popcorn eating declined. That was, however, until Jiffy Pop (the “all-in-one” popcorn) was introduced.
In the 1970’s convenience moved to a whole new level with the introduction of microwavable popcorn.

While popcorn remains a standard movie theatre treat, for the home chef popcorn is one of the cheapest and easiest snacks to make, lending itself to endless flavours and toppings. You name it, popcorn can take it; cool ranch, nacho cheese, bacon, Jamaican jerk, buffalo blue cheese, maple, caramel, kettle corn — the list goes on. But the popcorn train doesn’t stop there.

The possibilities with popcorn are broader than one might think. As it turns out, popcorn is a surprisingly versatile ingredient in the kitchen. It can be added to all kinds of recipes from chicken to cupcakes and yogurt parfaits — popcorn goes with everything!

A few of Victoria’s local chefs have been known to play with popcorn in their cooking as well. Executive Chef for Vista 18 Garret Schack says:

“Popcorn can be anything you can imagine; it’s a vessel for flavour with the added bonus of a crunch. Anything from sweet to savoury such as salted caramel popcorn or crispy duck skin popcorn.” 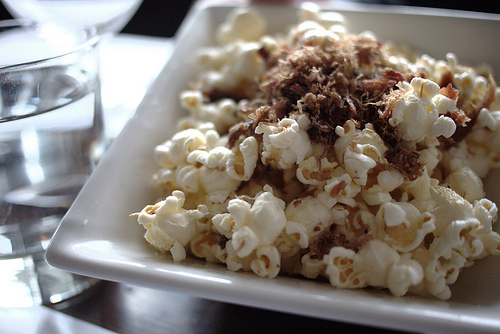 Heat 2 Tbsp of the fat, add popping corn and cover. When you hear popping, start shaking until the popping sound is pretty much finished.

Pour popped corn into a bowl then toss with ground duck skin and the last tablespoon of melted duck fat, then season with salt and pepper. Eat while it’s hot and fresh.

Popcorn can easily be incorporated into your main courses:

Preheat oven to 350º F.
Process popcorn in a blender or food processor until ground.
Pour ground popcorn into a shallow dish; stir in peanuts and set aside. In another shallow dish, whisk egg, soy sauce, garlic and hot pepper sauce until blended. Set aside. Heat oil in a large, oven-proof skillet over medium-high heat,
dip chicken breasts first in egg mixture and then in popcorn mixture until well coated. Place in skillet and brown on both sides; about 3 minutes per side.
Place skillet in oven 15 minutes or until chicken is cooked through.
Serve with Thai Peanut sauce.

Heat cream and 1 cup of the milk in a heavy sauce pan over medium heat until just scalded. Add the popped popcorn to the pan and let steep for one hour. Strain the popcorn milk through a fine mesh sieve into a large liquid measuring cup. Add enough of the remaining milk to make 3 cups total (about one more cup, give or take).

Return the milk to the sauce pan and return heat to medium. While the milk is heating, beat the egg yolks, sugar, and salt in a separate bowl with an electric mixer on high speed until light and fluffy, about 2 minutes. When milk is hot but not scalded, add a cup to the egg mixture and whisk vigorously. Pour the tempered (warmed) eggs back into the sauce pan with the remaining milk.

Reduce heat to low/medium-low. Cook, whisking constantly, until the custard reaches 185°F on an instant-read thermometer and is thick enough to just coat the back of the spoon. (You can stir occasionally at first, and more constantly towards the end, watching carefully to make sure the eggs don’t scramble). Remove pan from the burner, stir in vanilla extract, and continue stirring for another minute or so to release some of the heat. Strain the cooked custard through a fine-mesh sieve, if desired.

Chill the mixture in the refrigerator until completely cool, stirring occasionally, about 2 hours. Freeze the custard according to your ice cream maker’s instructions. For sundaes, serve with caramel sauce and homemade Cracker Jack.
Recipe Source

Superflux Cabana has opened upstairs at 804 Broughton St (the former location of The Livet). Featuring lots of Superflux beer and a menu that ...
Read More
January|February issue is on the stands! Pick up a copy, or read the digital version. Read ...
Read More
The Spanish verb “tapear” means to traipse about town, drinking wine and eating tapas at different places. Tapas are those small, exquisite ...
Read More