This five year anniversary is the first of many milestones to come for owners Cristen De Carolis Dallas and Geoffrey Dallas and their beloved Pizzeria Prima Strada. The couple met while working together in San Francisco, where they married, had their two children, and eventually made the move to Victoria. The Cook Street Village location opened on August 5th, 2008, and a year and a half later they opened a second location on Bridge Street.

They decided on the Cook Street location because of the unique and dense community, plus it reminded them of the village life they loved and left in the Bay area. Geoffrey sites why the Bridge Street location was a natural fit in the progression for a few reasons: one, Prima Strada was always intended to be a multi-location project and—with the popularity of Cook Street—it was time; two, it filled a niche in that area of town and allowed for more seating, hence the beautiful wood long tables and private dining room that accommodates larger groups; and three, when you are burning through six chords of wood a month between the two locations, you need to have the room to store it.

In the beginning planning stages, there were the big details that they thought long and hard about, but other aspects came naturally from the heart and just made sense to them as the way they wanted to operate. “We knew that we wanted it to be casual; we knew from our experience of being in Italy—where there’s kids running around the tables, wine that’s served in tumblers, and it’s comfortable yet everything you are getting is delicious.” It was important for this couple to create a restaurant where they could bring their children with them to dine out, and still satisfy both sides and not feel that there was any compromise.

The menu may seem simple at first, but the complexity lies within the simplicity of the ingredients and flavors. The staples of the flour and the tomatoes imported from Napoli, along with the Mozzarella du Bufala from Fairburn Farm on Vancouver Island will always be the foundation. Supporting local farmers and producers for the menu was a given from the start. 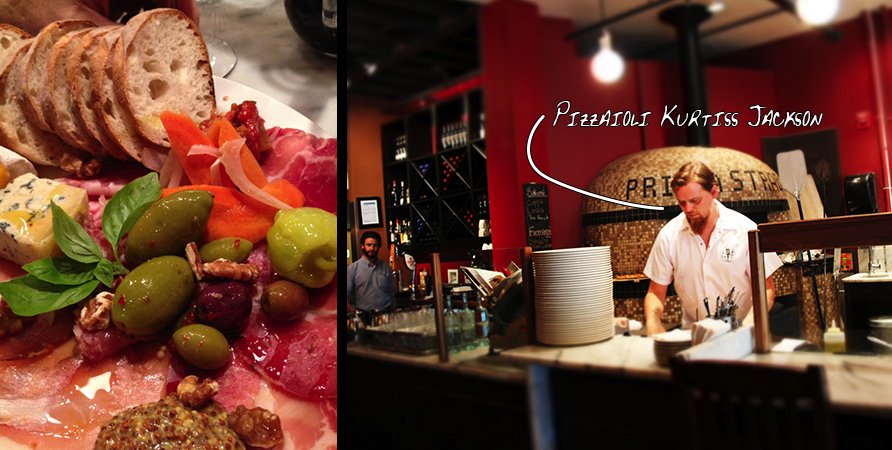 If the traditional wood-fired oven is indeed the heart of the Pizzeria, then the dough is definitely the pulse. Cristen describes the dough as “a simple recipe made with five ingredients: starter, water, flour, salt and love.” Smiling, they both talk about when “Birtha” was born in their garage a year before the restaurant opened. I’m puzzled as they go on to explain that she now lives at the Bridge Street location, she drinks Victoria water, and she eats Caputa flour daily. Ah! Birtha was the start of it all – literally – she is the natural levin starter that continues to live and feed the dough.

The Prima Strada website confirms their commitment to giving back to the communities they occupy. “We are passionate about supporting local causes important to our guests and neighbours. Contributing to the events and organizations that make our neighborhoods such great places to live and work is an important part of being a locally owned small business.” Near and dear to both Cristen and Geoffrey is the Heart and Stroke Foundation. Every February, they donate the proceeds from two days of the Bridge Street location’s sales to this organization. Moustaches are the uniform during Movember and they recently provided lunch for the volunteers of the Victoria Mustard Seed makeover. They also take their mobile oven into the community to participate in many local festivals and events. And yes, there will be another Prima Strada opening in a new neighborhood in the future.

“Without a doubt,” Geoffrey tells me, “Prima Strada will be here for a very long time to come and hopefully continue to operate within our family for generations. The ovens are built to last and the future will be our history evolving and traditions forming; it’s somewhat romantic, and is the true nature of the Pizzeria culture. Some of our staff have been with us since the beginning and they are the family within our family.” Over the years, they have seen their guests get married, start families, they have hosted Christenings, celebrated anniversaries and birthdays—the list goes on. “We are starting to see exactly what we wanted – a sense of family. It’s what we always hoped for and it’s thrilling for us to see it happening in a relatively short period of time.”

The article on L’Apéro in the May|June issue should have stated Chef Andrea Maiolo staged at The Courtney Room and Zambri’s and that he held the ...
Read More
May|June issue on the stands. Read ...
Read More
This raw applesauce, created by Tamara Bailey, chef/owner of Café Ceylon, has a unique paradisiacal ...
Read More