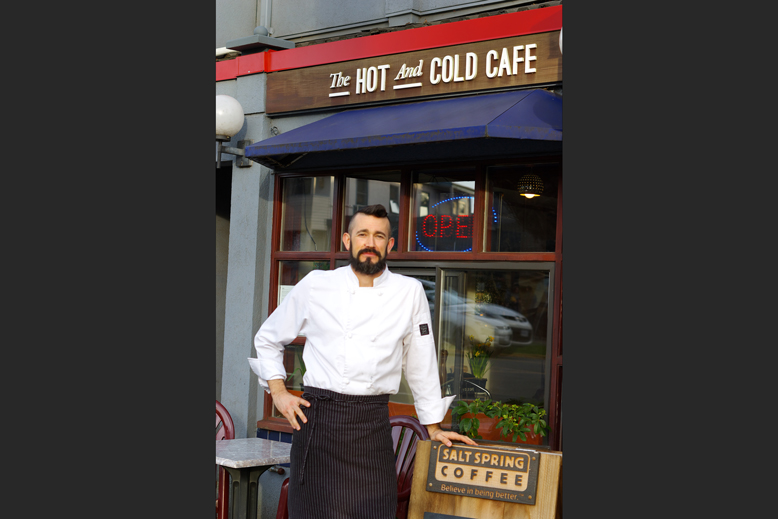 It’s late in the afternoon when I sit down to interview chef Cosmo Meens, owner-operator of Hot and Cold Café. As I walk into the Cook Street Village location, I notice Meens’ wearing a white chef’s jacket. I don’t typically associate chef’s whites with café’s but the sight of the uniform signifies cleanliness and skill. It also speaks of someone who takes their work seriously, and of someone who fundamentally understands the kitchen.

Meens has been a steady force in the Victoria food scene for most of his life. He wears many hats in the field too — a chef, cooking class instructor ( at Cook Culture ), food consultant and co-creator of Mo:Le Restaurant, Café Bliss, the late Village Family Marketplace, Fresh Coast Health Food Bar and his main gig the Hot & Cold Café. To say Meens has his finger on the pulse is an understatement. This go-getter of a man has been elbow deep in kitchens and food production since he was 12 years old.

When asked what keeps him ticking, Meens points to life experience and having learned to how to fast track decision making in the risky business of the food industry. “It’s ignition. I like to start things, learn about something until it’s tangible, doable and then pass it on, or move on.”

With almost all of his projects, Meens refers to what he calls feeling the “God Bumps” — a sort of premonition that something big is about to happen.

EAT: How has living on a farm impacted you as a chef?

Meens: I have total respect for food. When the farmer arrives I’m humbled. By [having that] experience on the farm I appreciate how hard it is to grow food and raise animals. I was a shitty farmer!

EAT: Who have been your inspirations when it comes to food?

Meens: I’d have to say my mother and father. [They] always cooked whole and healthy foods. My mother has an incredibly refined pallet and was very resourceful with food. John Hall from Cassis Bistro [who also inspired me] had no fear. He was a kind of cowboy in the kitchen, rough around the edges but he taught me the fundamentals of butchery, knife skills, grilling and sauces.

EAT: You were a raw foods vegan for awhile. What’s your position now?

Meens: I’ve taken what I’ve learned and blended it to have a greater appreciation for the whole spectrum. I kind of went extreme there. My mom was worried [laughs]. I’m more interested [now] in incorporating a colour wheel into my food. I eat very little meat in a sitting, usually 1-2 oz at most. My prediction is that in 5-10 years there is a strong potential to be smacked in the face with the un-sustainability of meat products. We just won’t be able to consume meat the way we do. It takes a lot of land, resources and energy to produce meat products. It also takes a ton of energy and enzymes for humans to digest meat (dairy and sugar included) and it’s hard on the body.

EAT: You teach classes at Cook Culture. Do you enjoy being an instructor and what do you teach?

Meens: I love it! It’s definitely one of my favourite things to do. I teach knife skills, Thai cooking, pasta and pizza making [to name a few]. I’m working on putting together a class on foods that fight cancer.

EAT: What’s your go-to food at the moment?

Meens: Hmmm, I’d have to say soup. My girlfriend makes a mean soup; puts the whole bone right in the broth. That and Pho but it’s actually pronounced “pha!”

EAT: What’s the one ingredient you would say gets the least (deserved) attention?

Meens: Tumeric. Fresh tumeric is amazing. It’s a potent anti-viral, anti-fungal, magic medicine. We’re adding it to our juices at the Fresh Coast Health Food Bar. That and Blue-Green Algae and Cricket Powder.

Meens: Yeah! It’s a very sustainable and dense protein source. It has to be a powder though because most people can’t yet handle the crunch factor.

EAT: Finally, what would you say to our readers that are looking to make changes in their diet toward better health?

Meens: Eat less food so you can eat more food. In other words, eat smaller, more frequent portions you so you can live longer. Of course it depends on the activity level of your lifestyle. We should enjoy our food but not be a slave to it. If it’s causing you stress, stop eating it.

For a man not yet 40 years old to have 4 out of 6 businesses (all started from scratch) still operating, indicates an apt mind for business, good instincts and perhaps, a few cases of God Bumps.