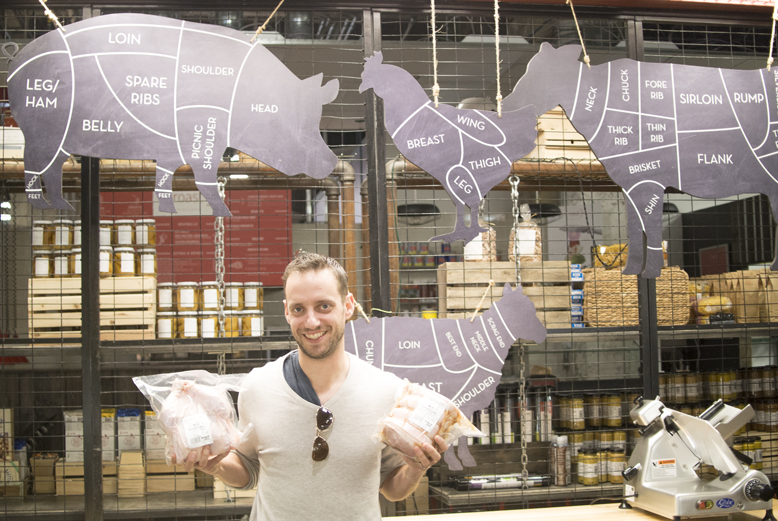 It’s difficult to deny that the Victoria Public Market is the “it” place for local purveyors to set up shop. Unsurprisingly, the Victoria Public Market is the very place that Ravenstone Farm decided to setup shop in February of 2014. The farmer-owned butcher shop specializes in pork and chicken made using locally raised meats from Ravenstone’s two farms in Qualicum Beach.

Despite being open for less than three months in Victoria, Ravenstone is a well-known staple at farmers markets in Victoria and across Vancouver Island. With no plans of business slowing, Ravenstone plans to provide top-shelf meat products across the island, including markets in Qualicum Beach, Duncan, Peninsula, Nanaimo and Cedar in 2014.

Owner Logan Smith says the biggest difference between their permanent Victoria location and the farmers market circuit is the ability to continually evolve their menu. Public Market customers have been clamoring for ready-to-cook options and Ravenstone will soon introduce a fresh chicken cordon bleu. 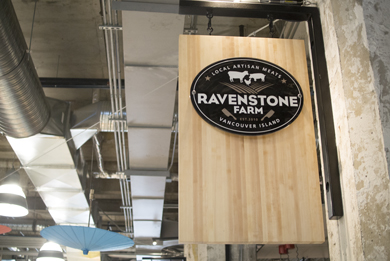 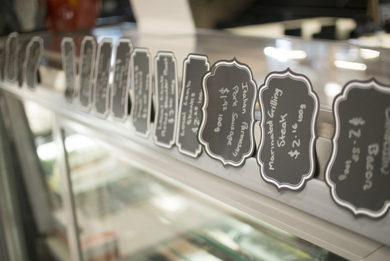 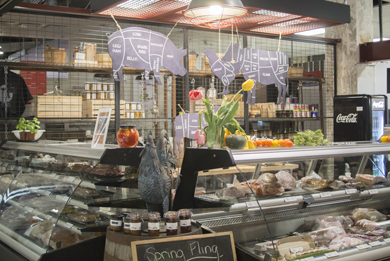 Ravenstone’s key product is their fresh pork and chicken sausages, raised and prepared at their farm . With over 20 unique flavours, these gluten-free sausages (according to their website, but one offering is not gluten-friendly) continue to be a best seller.

I tried the Mediterranean and curry chicken sausages. The lack of salt and grease was a welcome omission from the grocery store equivalent. With barbecue season fast approaching, I suggest serving a grilled sausage in a soft hoagie, paired with your favourite aioli and summer slaw. Smith also suggests trying their whiskey-smoked bacon, which has in itself created a devoted following of repeat customers. 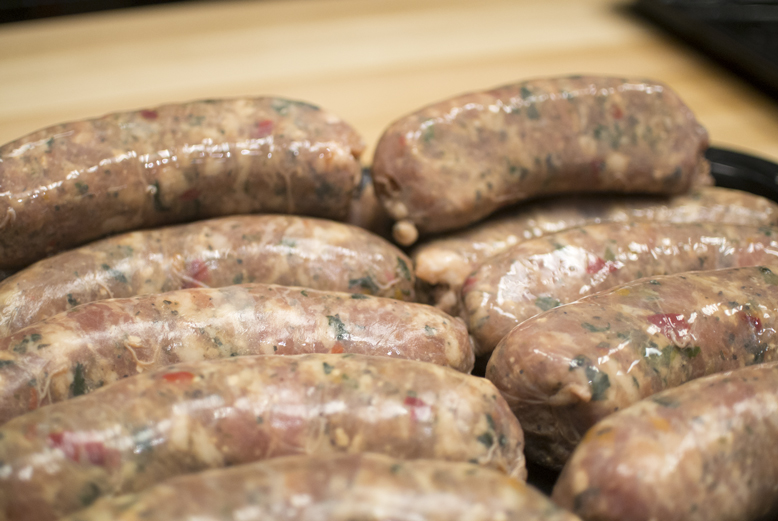 In addition to sausages and bacon, Ravenstone offers house-smoked and cured deli meats and salami, thick cut pork chops and chicken. All their products are free-range and antibiotic free. They also offer bison from Island Bison in Courtney and beef from Two Rivers in the interior.

Ravenstone Farms was originally a retirement project for Smith’s parents, who happened upon the name after noticing a large concentration of rocks and ravens on their property. Eight years later, Smith is pleased to have found a marketplace committed to local and sustainable products.

“The market is everything for us. If we had opened up a stand alone shop, it would have been a tough go,” says Smith, who encourages customers to ask questions about where their food comes from while shopping. “I can tell you where every animal came from and the life it lived.”

Business continues to increase and Ravenstone expects the market to attract even more customers following the opening of The Grocer at the Hudson.

For the lunchtime crowd, Ravenstone offers fresh made deli sandwiches and soup from 11 a.m. to 3 p.m. daily. A sandwich will run you $7, with soup you’ll be looking at about $10.

I suggest putting Ravenstone Farms at the top of your grocery list this week.

The article on L’Apéro in the May|June issue should have stated Chef Andrea Maiolo staged at The Courtney Room and Zambri’s and that he held the ...
Read More
May|June issue on the stands. Read ...
Read More
“Gather July 9 – 16 on historic Linnaea Farm, Cortes Island, for their annual ORGANIC MARKET GARDEN WORKSHOP.” You’ve dreamed of ...
Read More