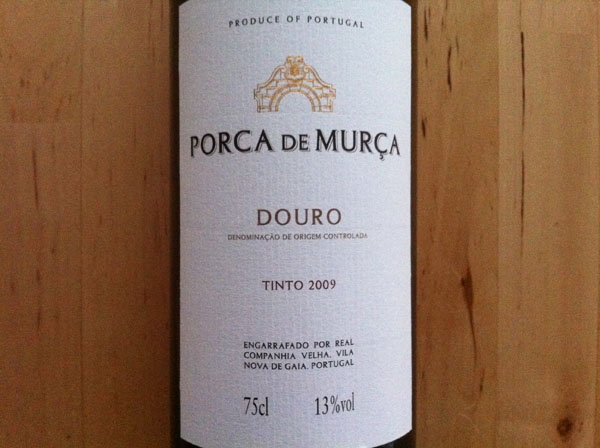 Readers of DRINK will know that for this first month of 2012 I’ve been focusing on value wines – wines that ring in under $17 max (most for much less) and that have quality far outnumbering their price tag. This Portuguese red certainly qualifies. Portugal, famous for their wines for centuries, is synonymous with fortified wines – the Vintage, Tawny, Ruby ports and the like. But Portuguese wines didn’t start out that way. Documents exist detailing Portuguese table wine shipments to England as early as the 12th century. For hundreds of years, this export-oriented wine had a long boat journey down the Douro River to the coast and over to England, and by the time the wine reached its destination, it had often begun to oxidize. Shippers learned that the addition of spirit to the wine aided in preservation and stability, and the tradition of fortifying Portuguese wines began.

But not all Portuguese wine is ‘port’. Dry table wines, like this one, are often a value find because very few people know about them. Therefore, demand is not high and the price is kept low. How low? How about a solid and interesting daily drinking red for $11? A blend of traditional Portuguese grapes (the same ones found in fortified port) Touriga Franca, Touriga Nacional, Tinta Roriz and Tinta Barroca, this entry level Porca de Murca is the top selling wine for Real Companhia Velha, with over 1 .2M bottles annually (!) No oak here – this is fresh red cherry and black plum, with earthy herbal notes, soft tannins and sweet black pepper on the finish. Uncomplicated and simple to drink, but not entirely simplistic – there is balanced depth of flavour here. Burgers, pizza, pork-decked sandwiches would fare well.

*January DRINKs will focus on budget-friendly selections, all ringing in under $17.

If the massive turnout at the first ever Wine Islands Tasting is any indication (sold out ++!), this will become a very popular annual event.  This ...
Read More