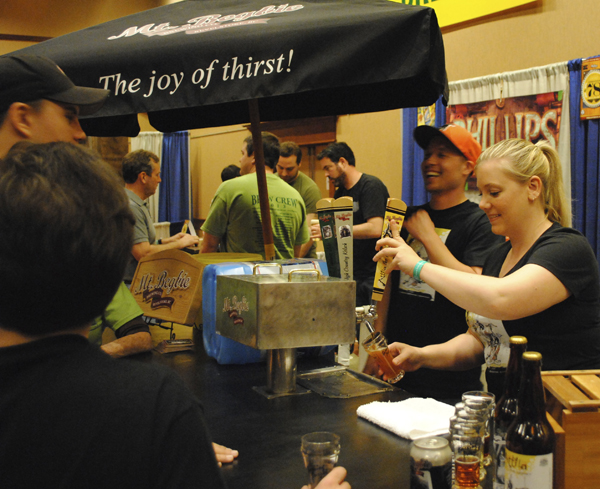 Penticton might be in the heart of Okanagan wine country, but for 18 years it’s been home to the Okanagan Fest-of-Ale. Registered as a non-profit society since 1996, the Festival brings an eclectic array of microbrewers to thousands of thirsty attendees in search of their next favourite lager, stout, IPA – or other unusual brew creation.

Over two days (April 5 and 6), 29 brewers poured 95 beers and ciders. Think of it as the ultimate indoor beer garden with smaller pours and more brew options, but one that helps raise money for local organizations like the Penticton Boys and Girls Club.

This year, EAT was invited along to experience what’s affectionately known as The Fest. The afternoon was colourful, pleasantly crowded, and offered plenty of cheer. While (humanly) unable to sample all 95 products, I managed to sip a few brews worth seeking out.

Fernie Brewing Company What the Huck (Huckleberry Wheat Ale): fresh and aromatic; plenty of subtleties for beer aficionados, and a delightful sipper for newbies.

Crannog Ales (Sorrento, BC) Insurrection IPA: hoppy from aroma to finish; it’s a big one – approach with caution, but it’s worth the risk.

Hoyne Brewing Co (Victoria, BC) Dark Matter: part stout, part brown ale, part porter; an experience unto itself for those who like dark places.

Mount Begbie Brewing Co (Revelstoke, BC) Attila the Honey: rich and clean amber ale with local BC honey; always one of my favourites, and a good match for warm weather backyard hijinks.

For more information on this year’s Fest winners, visit the Okanagan Fest-of-Ale Society.