Serendipity seems to follow Ben Cramb and Linnea Feist. They have the distinction of opening the Okanagan’s first gourmet hot dog joint…twice.

A few years ago, the couple was looking to expand their successful Vernon hot dog restaurant into Kelowna. Their first location, 3208  (named for its street address), had been open for almost two years; coincidentally, the site had been in the family before. It was the same building where Ben’s parents had run a restaurant years prior and, when the space came up for sale, he knew it was meant to be. Ben bought it, renovated it himself and 3208 was born—the first of its kind in the Okanagan.

Business, which is a family affair, was good. Linnea, also the daughter of Okanagan restaurateurs, spent her days as a financial analyst for Fortis BC and her nights helping out at 3208. After a couple of successful years, Ben and Linnea decided to open up a second location in Kelowna. They eventually did, but not in the way they expected.

A flood led to 3208 being shut down and the entire building being gutted. Asbestos and mold were found and, after 9 months of waiting for repairs, the two knew they had to make a change of plans.

So they decided to start all over again in Kelowna.  For Linnea, that meant leaving her job with Fortis. “It was a big move; I’m not going to lie. You get a little bit nervous and scared, but it’s fun and the restaurant’s part of us and part of our family. It’s not just this mega corporation sitting behind a desk.” 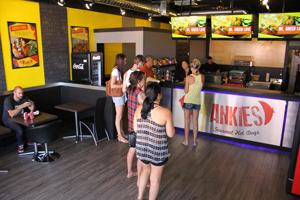 In March 2013, Swankies opened its doors in Kelowna. The location is right in the middle of the cultural district in the north end of downtown; 6 square blocks of artists and performers, galleries and museums, restaurants, a library and coffee shops.

Perhaps the perfect location for something Kelowna had never seen before; business is booming and the two expect to open a second Swankies.

“Everybody can relate to a hot dog. You can be 5 or you can be 95, who doesn’t like a hot dog?” laughs Linnea. “We have little kids who come in and have a plain little puppy dog and are just as excited as someone who comes in and has the Benny’s Big Boy.  It’s warm; it’s comforting.”

“We wanted to do something that touched young and old, something that everybody knew about or could relate to,” chimes in Ben. “The hot dog was the perfect vessel to combine all of our gourmet cooking styles and ideas.” 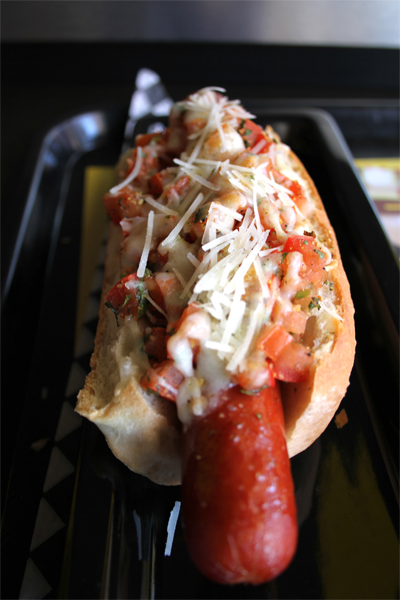 With 23 hot dogs under $10 on the menu plus a “dog of the month”, it’s clear there is no shortage of ideas.  Hot dogs such as Leggo My Bacon with waffle bites, aged cheddar, thick cut bacon, and maple syrup are served up alongside Zee German with its sweet and spicy mustard, warm sauerkraut, and caraway seeds. The Benny’s Big Boy features a hot dog topped with ham, chili, cheddar, mustard, bacon, hot peppers, and a fried egg.

“By hand or fresh, that’s the way we think,’ insists Linnea, who says all ingredients are sourced locally. “Ben grates his own cheese and does his own bacon. Everything is not from a bag. That’s really important.” At least wherever possible: the Cap’n Dawg’s feature ingredient is Captain Crunch cereal; on the Beaner Wiener, it’s Kraft Macaroni and Cheese.

Whether you are celiac, vegetarian, you like your hot dog plain, or you want to build your own, you can get it at Swankies.

You can even get Linnea’s favorite, The Lost Dog; it’s everything but the wiener.

Ben’s favorite?  You’ll have to ask him; it depends on the day.

July|August issue on the stands. Read ...
Read More
Where in Victoria would you go for breakfast that you’d also go for dinner? That’s the question Chris Jones and Josh Goyert asked themselves when ...
Read More