One morning about five years ago, Ben Cram and wife Terra Ogawa stopped by The Parsonage Cafe for their usual morning coffee. Having recently resigned as Chef at Pescatore’s, Ben was looking for a change, but didn’t know what. It was that nondescript yet fateful day when the cafe’s owner approached the couple and offered up the business for sale. “We laughed,” recalls Cram. “But then we realized she was serious. We came back a few hours later and said, ‘We’ll take it.’ ”

And so, Fernwood Coffee was born. Originally, Cram and Ogawa envisioned converting The Parsonage into a bistro. But, fascinated with the old German 1930s coffee roaster in the cafe’s back room, Cram developed an interest in the process and decided to dive into the world of coffee instead. He coaxed friend Sam Jones (of 2% Jazz fame) to mentor him and teach him everything he knew about the art and craft.  A new roasting machine was purchased, and Cram adopted the method of Profile Roasting, where rather than “roasting to colour” or using a timer, the person operating the machine tracks the timing and temperature of each individual batch, step by step, on a graph. This way, when cupping time comes (the taste test), one is able to tell precisely how to replicate the roast that turned out to be the finest.

Partner Rob Kettner (who left the business recently to pursue a personal venture) was a journalist and friend of Cram’s who stumbled into the coffee business when a broken arm prevented him from hauling his camera around. He started by bagging beans (with one hand), then helping with roasting, and eventually bought a stake in the business. In relatively no time at all, this java neophyte went from broken-armed journalist to Barista of the Year in the Canadian Barista Championships. After picking up the top prize in Canada, the Fernwood Coffee crew went down to Columbia to compete in the 2010 World Barista Championships. They ended up placing 16th in the world out of 65 countries – not too shabby for a group of newcomers.

Besides the art of the cup, Ben Cram takes a particular interest in sourcing his product and is actively involved with the ethical side of the coffee trade, visiting farms and attending town-hall meetings with growers. He was recently selected to be an observer at Cup of Excellence, an adjudicated blind tasting event where coffee farmers from all over the world submit their finest “lot”, then the best beans are auctioned off to the highest bidder. This is highly beneficial to the winning farm, says Cram, as it raises their global profile and gives them an opportunity to ask a higher price in the future and improve their way of life. 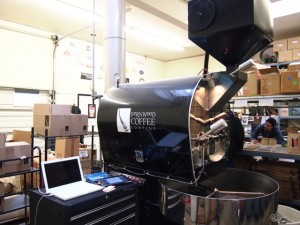 In addition to its nationally-acclaimed espresso, The Parsonage Cafe––as it is still named––now features an amped-up food menu, including lunches made with charcuterie from The Whole Beast, and Slater’s First Class Meats, pastries from Bond Bond’s and Wildfire Bakery, and an array of house made soups, sauces and chutneys. Fernwood Coffee beans are available at dozens of retailers around Victoria, but the only place to find their special Single Origin roasts is at the cafe (and for a limited time, The Whole Beast in Oak Bay). Having issues with your home brew? Public tastings are held every Wednesday afternoon, where 4th-in-Canada barista champ Morgan demonstrates different brewing techniques and helps anyone troubleshoot his or her coffee-making quandaries.

Superflux Cabana has opened upstairs at 804 Broughton St (the former location of The Livet). Featuring lots of Superflux beer and a menu that ...
Read More
January|February issue is on the stands! Pick up a copy, or read the digital version. Read ...
Read More
photo: local chefs gather at  Homegrown Café in Chesterfield, ON to celebrate Food Day in 2009. In 2003, The World’s Longest Barbecue was a ...
Read More