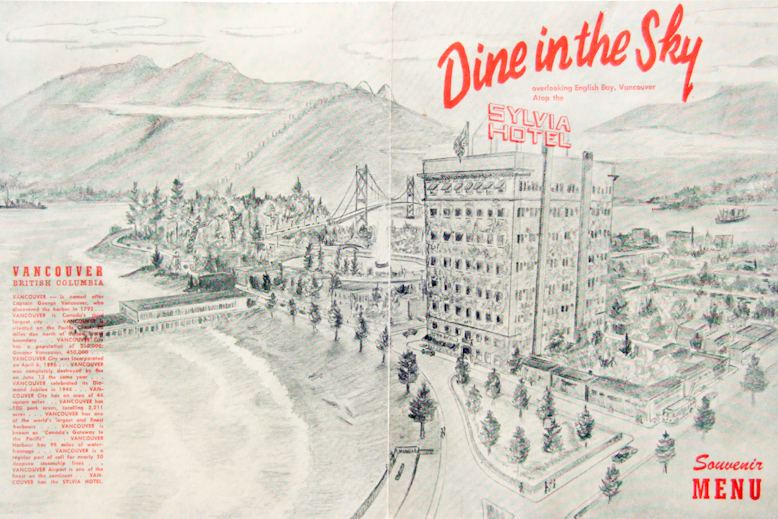 The resurrection of The Roof at Hotel Vancouver (albeit temporary) has me pondering the rise and fall of elevated eateries. Before the arrival of TV and the proliferation of the virtual world, to look heavenwards for a meal came with its own set of rewards (and pitfalls) starting with the trip itself.

My first introduction to ethereal eating came with an early 70s visit to the revolving top floor restaurant of Montreal’s Place Ville Marie. Its main claim to fame in the eyes of my workmate, Brian, was that when we were broke (which was always) the CN-run establishment would honour his cherished Air Canada credit card. We would be whisked up 47 stories to find ourselves in the heady surrounds of Altiteque 737. You might be excused for imagining that the widely produced Boeing inspired the name, but you’d be mistaken. In fact, it reflected the building’s height: 737 feet, then one of the tallest buildings in the world.

At the time, Montreal was also considered to be the vortex of Canadian business, and still yet to fall prey to Toronto. That in itself added another little frisson to the idea of rocketing skyward to mingle with the movers and shakers. Atop nearby Chateau Champlain, the revolving restaurant and buffet became a celebrated “dine ‘n dash” target. The scam was incredibly simple: prospective diners would make their selection and load up their plates before promptly leaving by the stairwell (and fire exit) that, if their timing was right, would be right at the end of the dessert showcase. 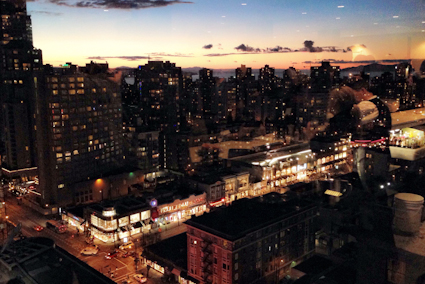 The Roof at twilight

Fast forward to Vancouver, a few decades ago, and The Roof was The Place to See and Be Seen. In fact, if you didn’t make it to the bar by 4pm—some days even earlier—chances are you’d be out of luck, because half of Howe Street was already on their third martini and occupying the best seats.

Every city across the country had their rooftop restaurants, although Vancouver boasted several. In the 1950s, The Roof competed with The Sylvia Hotel’s Dine in the Sky, which, while a mere eight stories high, towered above the then mainly single-family dwellings of the West End, on the edge of English Bay and the relative wilderness beyond.

While “Dine in the Sky” was long gone by the 70s and 80s, Vancouver was awash in skyscraper dining rooms, especially in the West End.  You could choose between The Coast (Windows on the Bay, 35th floor), The Blue Horizon (known affectionately as the “Blue-Hoo” Rainbow Room), revolving Cloud 9 (the 42nd floor of the then Sheraton, now Empire Landmark), The Odyssey (on top of the Hyatt Regency), The Renaissance (Vistas), and the Top of Vancouver. Today, only the Top of Vancouver and Cloud 9 survive, ostensibly for the convenience of tourists. However, even tourists are just as likely to head for terra firma (and better kitchens) at the likes of The Salmon House or Horizons.

So what was it that spelled the demise of skyscraper dining? You could say it was merely a matter of taste and time. Diners were no longer willing to tolerate what was often mediocre food and service merely to ooh and aah at the city below their feet. Often as not, even if there was a prep kitchen on the same floor, it was just as likely to be a floor below, if not several.

But there was more happening. A waterfront once ruled by industry was taking new shape, with neighbourhoods emerging and restaurants popping up all over. Patios (not ideal at 40 stories) enhanced the street experience and reinforced the connection with the community. What’s more, the emergence of a truly local dining culture across the board offered plentiful, more grounded and less pricy opportunities.

Most of those grand, rooftop rooms have been mothballed, although some are still rented for private functions. Even the self-proclaimed “popup”, The Roof,  is scheduled to suffer the same fate once the Hotel Vancouver’s main floor renovations are complete, sometime this fall. 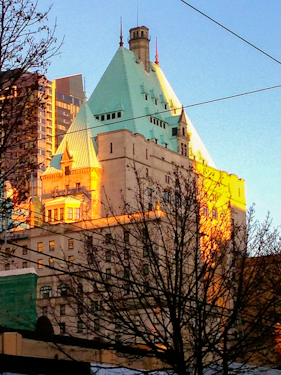 The reality: dining out has been democratized, very much brought down to earth. And with the bottom line, rather than romance, in charge, the likelihood of a widespread rooftop dining revival is scant. However, a move away from the cumbersome trappings and laborious demands of Continental dining, that once marked all of these rooms, does offer a glimmer of possibility. Small plates, wine by the glass, charcuterie, cheese platters—still enjoying a surging popularity, along with cocktail culture—might be just the right fit. Maybe it’s time to revive at least a couple of those skyward lounges after all. And drink in the view once again.

For more illustrations from the archives visit http://illustratedvancouver.ca/post/34990758123/dine-in-the-sky-overlooking-english-bay

The article on L’Apéro in the May|June issue should have stated Chef Andrea Maiolo staged at The Courtney Room and Zambri’s and that he held the ...
Read More
May|June issue on the stands. Read ...
Read More
As it is more and more frequently these days, the Victoria Public Market in the Hudson building was filled with incredible locally made food, ...
Read More