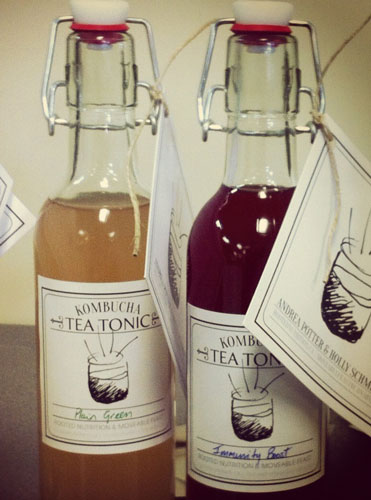 Over the years kombucha has cycled in and out of popularity and is now back with gusto. But this time, the fermented tea beverage known for its health benefits is quenching the thirst and detoxifying the livers of health junkies and gourmands alike. Vancouver-based chef and holistic nutritionist Andrea Potter, who has been brewing her own kombucha for six years, thinks that the recent kombucha craze can be attributed to more than just its nutritional qualities.

“There are a lot more foodies getting into it because it is a traditional food,” Potter said, adding that fermented foods like sauerkraut and kimchi have seen a similar surge in popularity. The tart, cider-like, effervescent drink is gaining gourmet status around the world is even marketed as an alternative to beer and wine in Germany. Some restaurants in Berlin have gone so far as to offer kombucha, or “wunder-pilz” with gastronomic pairings.In essence, kombucha is a mixture of caffeinated tea and sugar that is fermented by a “mother” culture. The mother digests the sugar and caffeine, producing a beverage rich in probiotics, organic acids and B vitamins. Kombucha has been long regarded as a very powerful cleansing, alkalizing and detoxifying beverage.

Because kombucha is a live, cultured beverage, its flavour profile can vary significantly.“We used to value consistency but people are appreciating the different nuances in each batch,” she said.

Potter has plans to make and sell kombucha, along with other fermented foods like sauerkraut and kimchi, as another facet of her cooking and nutrition business, Rooted Nutrition Cultured Foods.

“I am going to do it in a different way than grocery stores,” Potter explained, saying that she did not want to produce “soda analogous” flavours that many super market brands boast. Although she wouldn’t say exactly what will set her kombucha apart, she did mention that she took inspiration from Kombucha bars. These health bars, popular in Hawaii and Germany, serve kombucha on tap.

Whatever twist she ends up giving it, the possibilities for flavouring kombucha are almost endless. Potter has infused kombucha with herbs and has even used it as a substitute for sparkling wine to make “kombucha mimosas”, as it has a similar acidity.

Kombucha may also have a place in mixed drinks. “There’s potential in the alcohol business,” Potter said.

Cocktails that detoxify the liver? I feel the next new kombucha craze coming on.

“Knifewear’s handmade Japanese knives are usable art for the kitchen.” For some, combining coffee with knives sounds dangerous: ...
Read More