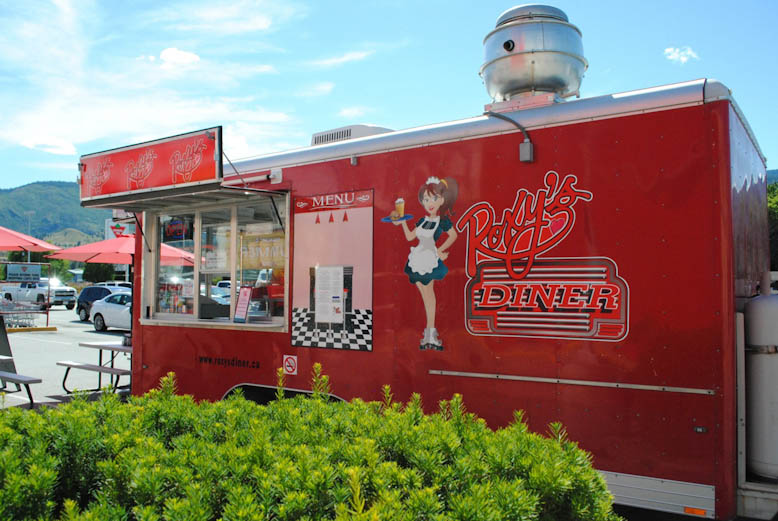 Many chefs dream of owning a restaurant, but reality can be less rosy than fantasy when there’s more at stake than one has anticipated. Vincent Denis knows what it takes to get the job done in the kitchen and the front of house, so when he and his partner Christine Leman decided to get into the food truck business with Roxy’s Diner, they did so with eyes wide open and expectations checked.

A professional chef, Vincent had already been at the helm of his own restaurant for more than 15 years and in the food industry for over 20. He owns Santé Bar and Grill at Big White ski resort and has been “on the hill” for 15. Prior to that, Vincent worked at a vegetarian and vegan restaurant in northern California—something of a stretch from the Roxy’s menu; featuring a Bringing Home the Bacon Bacon Dog (a bacon-wrapped, deep-fried hotdog) and the Winner-Winner-Chicken-n-Waffle-Dinner. “It’s definitely different,” says Vincent with a smile, “Different is good.”

Vincent and Christine met a few years ago in a dog park while walking their respective four-legged pals. At the time, Christine was in the dog-boarding business. “I’d never worked in food service ”, she says. When other teenagers were working at fast food joints or waiting tables, Christine was marking trails and painting signs with BC Parks Service. “It was more interesting, and it paid better.” Together, the couple has three dogs: cuddle-loving Ripper (a collie); shy, affectionate, and slightly neurotic Makaze (aka Kaze, another collie); and the slightly deaf but eager-for-head-scratches Crease (a shepherd in his senior years). Their love of dogs explains why Roxy’s Diner always has a full water dish and treat jar at the ready. 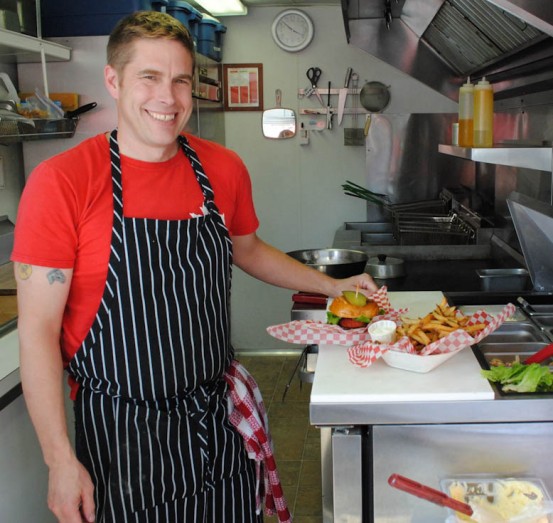 While the Okanagan food truck scene remains somewhat smaller than that of urban centres, it compensates with quality and variety. Roxy’s Diner Food Truck has a professional kitchen and fire suppression system like one found in a commercial restaurant, a full-sized refrigerator, and a grill (soon a two-burner stove top). The truck was purchased last year from a couple in Vernon who had used it to sell pre-made burgers and fries. “It was being underutilized,” says Vincent. He and Christine had been looking for a gap in the food service industry in the south Okanagan, and this ready-made food truck came at the right time. They added the culture, created a unique menu, and hit the road.

Almost every item on Roxy’s menu is made in-house—rather, in-truck—including fresh cut fries, a chuck-short-rib-brisket burger, and house aioli. That bacon-bacon dog comes with chef’s own apple-bacon relish and the gravy for the poutine (with real “Squeaky Cheese Guy” Quebecois cheese curds) is homemade. It’s the little things that make a big difference—right down to the fries. Oh, the fries.

“We use a traditional double-cook method”, says chef. “First, the fries are blanched for 5-6 minutes. Then they rest for at least 30-45 minutes.” It’s a lesson in specifics and attention to detail, where something as seemingly insignificant as fry resting time is crucial. “It gives time for the fry to lose some of its moisture.” This provides for the right balance of crispy outside with a soft, mashed-potato-creamy quality inside. As nice (and easy) as it would be for chef to standardize this cooking process, there are too many variables at play. “Potato sugar and starch content changes,” he explains. “It’s really an art form.” His benchmark: the elegant French bistro Bouchons,  in Kelowna. “If we can approach their fry quality, I’d be very happy.”

Someone who spends this much time thinking about fries easily inspires confidence for diners exploring the quirky-fun menu. As much, or more, care goes into the coating for the southern fried chicken or the way the beef is sliced just right for his Okanagan version of the Philadelphia cheesesteak (it’s a very close second to the original). A studied, hands-on approach takes time, but to Vincent it’s worthwhile. “It’s never a mistake to enter into a business and do your best.”

Christine has a thousand-watt smile ready for every customer

Part of doing their best included a research trip to Portland, Oregon last fall. “We spent days going from truck to truck. It’s unbelievable what food trucks have done for that city. What you end up with is a better overall food culture.” Vincent and Christine believe food trucks add to the culinary diversity of a city or town. “There’s no threat to bricks-and-mortar restaurants.” Rather, trucks like Roxy’s Diner allow for a specialization that fixed locations might not be able to provide. “Some trucks in Portland serve two sandwiches. That’s it.”

As our food truck culture grows, municipalities and districts might want to revisit business-licensing processes. Vincent and Christine live in rural Oliver, an area within the Regional District of the Okanagan-Similkameen. When they approached the town of Oliver to obtain a license to operate, it wasn’t a smooth experience. “An electrician in rural Oliver can easily get a business license, but not a mobile food truck,” says Christine. 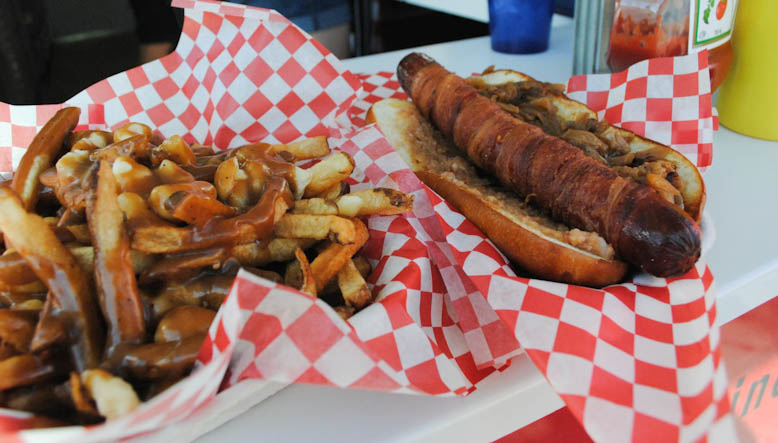 On applying for a business license in their home community, the couple received confusing information from the town office: the mobile food truck seems to fall in a grey area. As an additional layer, to participate at some festivals Roxy’s Diner requires an inter-community license. It’s a complicated process for a seemingly innocuous endeavor, and could have deterred those less persistent. We should be supporting economic development in small rural communities and people like Vincent, who have considerable experience and are starting a business in a local economy in need of a boost.

When it came to location, Vincent and Christine contemplated approaching a few sites before learning of a company looking for a seasonal mobile food vendor: Canadian Tire in Penticton. Since Roxy’s Diner opened, the couple has received requests from other businesses seeking a unique value-add-on. “We’ve even been approached by wineries throughout the valley,” says Vincent. “It’s crazy. So far, we’re doing pretty well. Everyone says July and August will be the busiest months, so it’s good have had a slower start.”

Setup takes about an hour, not including kitchen prep time, and it’s about twenty minutes longer to take everything down at the end of the day. A smaller kitchen might mean a faster clean up, but there’s always work to do. “My hands touch everything,” says Vincent, grinning. “It’s great—different than having staff to do the grunt work, but great. I personally touch every piece of food that leaves the truck, and I love it.”

based in Oliver BC

The article on L’Apéro in the May|June issue should have stated Chef Andrea Maiolo staged at The Courtney Room and Zambri’s and that he held the ...
Read More
May|June issue on the stands. Read ...
Read More
VANCOUVER ISLAND Support from culinary faculty a key ingredient in their success With the support of VIU’s dedicated Culinary Arts faculty, ...
Read More