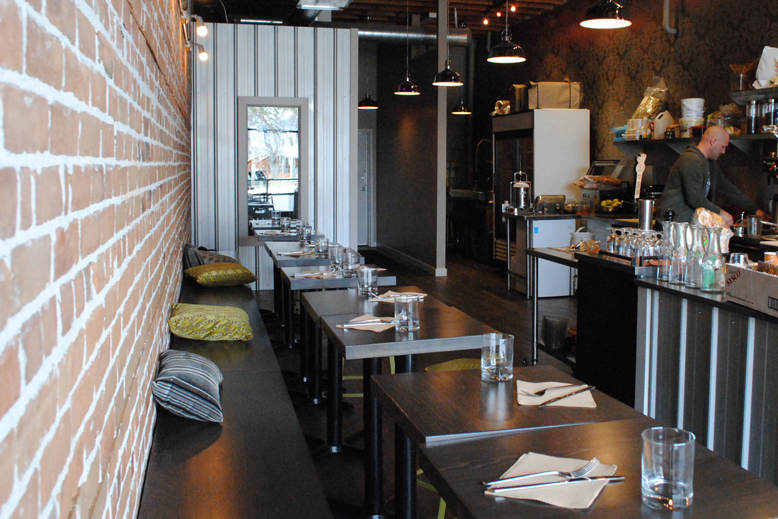 if you ask a chef why they do what they do, there’s a good chance the answer will include how food is to be enjoyed with friends and a love of being part of that experience. For chef Jason Leizert, cooking food has acted as a passport; fortunately for the people of the Okanagan, Leizert brought some of his journeys to the recently opened Salted Brick www.saltedbrick.com in Kelowna.

After stints in Scotland, Peru, Australia, and Vancouver (to name a few), Leizert looked to British Columbia’s southern interior for a place to cook food. That’s right – at a time when celebrity chef culture has helped boost enrolment at culinary schools and launched a slew of reality television shows, Leizert refers to what he does as cooking for people. It’s as refreshing as the pared-down menu, with choice of one red or white wine and one beer option. “The great thing about cooking is you can go anywhere and land a job”, says Leizert. “If you have a head on your shoulders – and don’t have an ego.”

There’s no room for ego in a place like Salted Brick – literally. A long spare bench hugs one wall, anchoring several small tables and offering an official seating capacity of less than a dozen. Current city regulations dictate this number based on a customer-facilities-to-seating ratio. Leizert has an application in for a patio this summer, which should improve customer chances of getting a seat. Ultimately, he’s not overly concerned about space. “It’s perfect for people to pop in, stay for an hour, and move on somewhere like RauDZ www.raudz.com or micro bar + bites www.microkelowna.com for another dish.” Take out is a popular option, but Leizert has found people are willing to be patient and the flow has been steady since opening in February, daily, from brunch through to dinner.

The arrival of Salted Brick was the latest piece of an intangible puzzle representing Kelowna’s downtown food scene. With aforementioned eateries as part of a larger group of like-minded food-oriented thinkers, the area is now easing into an evolution of community-spirited business practice. A few fellow chefs have already visited Leizert’s kitchen for the chef equivalent of a play date. This collaborative vibe is becoming a more regular occurrence in culinary circles, and consumers are likely better off for it. 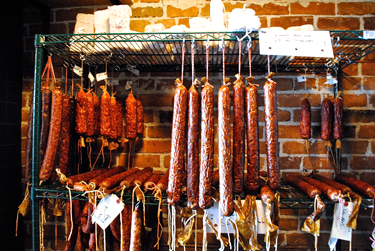 Back at Leizert’s place, the aroma of cured meats and fresh cheeses is distracting. A small curing room at the back of the room and a deli fridge near the front act as bookends, containing (loosely) the open kitchen-prep-station and butcher area. “I enjoy it”, Leizert says of butchering whole animals on site. “I want people to see what we’re doing, if I’m butchering a pig. People are excited about it.”

Over the last two generations, we’ve been slowly and imperceptibly removing ourselves from the preparation of our food and of food as part of our culture. People like Leizert are trying to bridge the gap we’ve created, and there seems to be appetite for what he’s offering. “I’m bringing in a whole wild boar.” Leizert flashes a thousand-watt grin. It’s easy to be charmed by his enthusiasm, and I’m not immune.

If it’s people who bring enjoyment to a food experience, and the enjoyment of food depends on the people you’re with, Leizert seems a perfect storm of honest intention and approachable education. “I just want people to try different things”, he says. While customers might not see it listed on the menu, it wouldn’t be unexpected to ask chef what was in that delicious dish and learn you’ve inhaled tongue or pig head – with unabashed glee, at that. “The best part is when people come in and say ‘just cook for us’, without even looking at a menu.”

Salted Brick works with producers who farm-raise without hormones. Fat from on-site butchered pigs is rendered into lard and available for sale, ready for use in home baking. Fish rests alongside house-cured deli meats in the curing room and makes an appearance on charcuterie plates, in sandwiches, and in the deli fridge. Leizert acts as host, chef, and conversationalist. It’s that kind of joint. 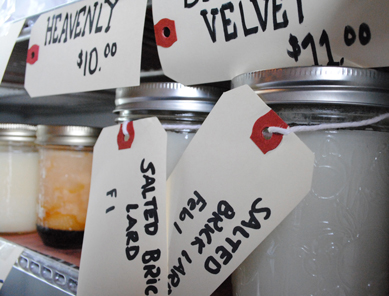 Where to find it:

After spending a precious hour with him before opening, I leave chef to his morning duties: roasting, prepping, answering the phone, and the relentless paperwork that accompanies self-employment. Thoughts of picnic lunches (in the works for this summer) and that homemade lard linger with me long after I’ve left the comforting aroma of cured meats. I’m smitten with chef, admittedly, and without having eaten a bite. Something tells me I won’t be the only one.

Develop your own crush: follow chef’s culinary adventures at instagram.com/saltedbrick.

For three generations the Schaddelee family has been making traditional pastries and chocolates here in Victoria at the Dutch Bakery and Coffee Shop ...
Read More