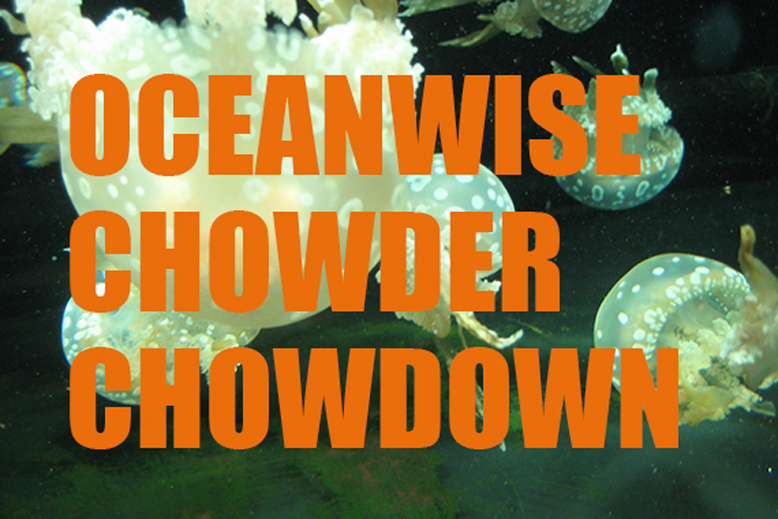 What do white beans, sunchokes, hazelnuts, popcorn, and smoked octopus have in common? They all made an appearance at the 6th Annual Vancouver Aquarium Chowder Chowdown. Thirteen of Vancouver’s top chefs came together on November 20 to share samples of their unique, sustainable seafood chowders with a crowd of 600 eager tasters.

Each chowder was paired with a local craft beer, including Driftwood, Stanley Park, and Big Rock breweries to name a few, making for a delightful evening showcasing a plethora of local talent and bringing awareness to an important cause. The annual event supports Vancouver Aquarium’s Oceanwise program that promotes sustainable fishing and farming practices to maintain the marine ecosystem.

Guest judges in the upper echelons of Vancouver’s seafood and local beer scene voted for the winner, while each of the 600 attendees voted for the People’s Choice award.

Reigning champion chef Chris Whittaker of Forage was proclaimed King of Chowder again this year with his take on the New England classic. His creamy B.C. Spot Prawn Chowder featured generous hunks of tender spot prawns basking in a super smoky, cream-based broth. And if the chowder itself wasn’t rich enough, a soft-boiled quail’s egg and a crunchy piece of Chicharrón brought the dish to a whole new level of chowder royalty.

Chef Ned Bell of YEW Seafood + Bar took home the People’s Choice award with his The Big Red chowder. Plump, humpback shrimp swam in the silkiest, smoothest chowder of the night. Garnished with diced local apples, roasted hazelnuts, and dried cranberries, Bell showcased seasonality at its finest.  When asked about the unlikely though utterly delicious combination, Bell explained his inspiration came from the distinctive flavour of the shrimp.  “The humpbacks have a bit of a nutty flavour and that’s why we paired them with the hazelnuts,” Bell said while serving up portions of chowder to a growing line of tasters, “and the apples and cranberries give it a sweet, tart flavour — paired with the shrimp I think it works really well.”

Innovative garnishes seemed to be a secondary theme of the evening and were as varied as the chowders themselves. From The Cascade Room’s mini-cornbread muffin to the Delta Hotel’s soft cheese gougère, what came on top of your cup o’ chowder was almost as exciting as what was in it. Perhaps the most surprising was Brodo Kitchen’s fennel popcorn garnish, which soaked up the broth beautifully like no ordinary kernel of corn could ever do.

Though it wasn’t a winner, the only truly tomato-based (Manhattan style) chowder of the evening, created by Chef Aleks Kornat of Delta Hotel’s Manhattan Restaurant, seemed to please the palates of many. Alongside Stanley Park’s 1987 Amber Ale, Kornat’s Maple-smoked Oceanwise Sablefish and Tomato Chowder made for the most pleasing pairing of the evening. The caramel flavours of the ale accentuated the smoky-sweet sablefish while hints of star anise and fennel warmed the palate. Shane King, Banquet Chef at Delta Vancouver beamed broadly as he helped serve up the chowder.  “To support Oceanwise is a big deal to us,” he said. “It’s nice to do your part.”

Eating on the road is always an adventure. With my laptop always close by in my backpack, I’ve been fortunate to spend this summer traipsing around ...
Read More