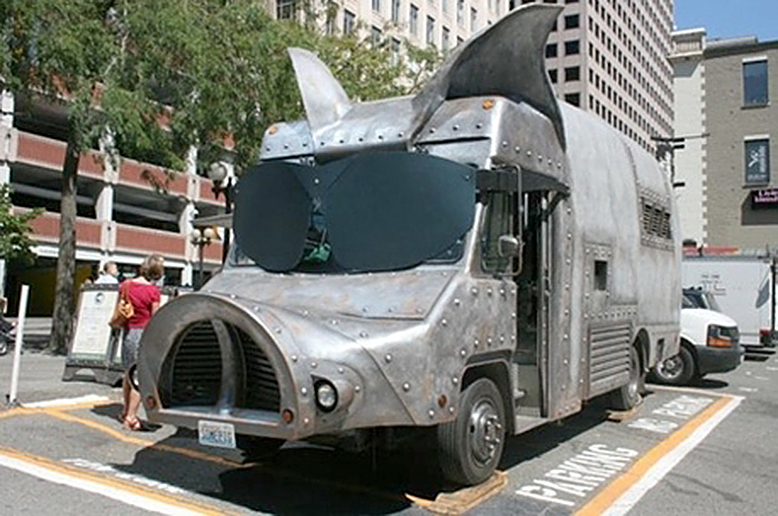 I had 2 free days a couple of weeks ago (doesn’t happen very often!) so I stole away for a 36 hour Seattle summer sojourn.  Took the Clipper down standby (nerve-wracking – I got the very last seat!), and a few short hours later was walking the hilly streets of Seattle.

Since I didn’t have a car, and needed a little relaxation, I wanted to keep things simple and stress-free – and within walking distance to the downtown core.  The hotel I stayed at couldn’t have been a more perfect fit.  The brand new Hyatt at Olive 8 is an uber-eco oasis, conveniently situated at the corner of Olive and 8th (a block from Pacific Centre and minutes’ walk to Pike Place).  This architecturally stunning 39 story hotel/condo has just received LEED Silver status, a first for hotel/condominium buildings in the Seattle area and one of only 20 hotels in the US to be officially designated ‘green’.  We’re not just talking low-flow plumbing and recycling bins (though they certainly have those).  Think composting programs in the kitchen, eco-friendly cleaning supplies (and carts) for housekeepers, room lights that only work when your key card is inserted in the activation slot (no more lights on when you’re out), well placed and abundant A/V equipment in conference rooms to reduce the use of printed paper, reclaimed fallen timber in the restaurant, extensive glass in all public and private areas to reduce the need for artificial lighting, an 8000+ sq ft green rooftop…  I could feel my stress begin to melt away…

Add in thoughtful amenities like the 24-hour state of the art fitness centre, sunlit 65 foot saline pool and oversized jacuzzi, and the eco sanctuary spa Elaia, utilizing local organic ingredients (including the coffee grounds from the hotel’s kitchen) and it’s easy to find an excuse to stay in.  Even for sustenance.  Urbane restaurant sources the majority of ingredients for its seasonally-based menu within 200 miles.  An impressive extensive and rotating selection of bitters and syrups are made in-house by Executive Chef Brent Martin and his team (don’t miss trying a taste at the lobby wine & coffee bar) and the wine list is overwhelmingly Washington.  On the menu when I visited recently: Beecher’s Cheeses, Frog’s Song Farm produce, Uli’s Sausage, Salumi Artisan Cured Meats, Macrina Bakery muffins and La Panzanella Crackers.

But go out, I did.  The next day, after fueling up with an excellent latte at Monorail Espresso (*I would have had another but it’s cash only – arg) and stuffing my carry-on bag with goodies from Pike Place (yum – truffle salt from La Buona Tavola!  Fire up the popcorn popper!), I happened upon absolutely the coolest thing I have seen in a long time.  A giant, shiny metallic Airstream-turned-pig – sunglass clad no less.  Think Victoria’s Pig BBQ Joint – but on wheels – and mobile – and you pretty much have it.  Maximus/Minimus is wicked delicious, cheap and satisfying wholesome food.  And like Pig BBQ, the menu is short and sweet too:

And the Max/Min?  Well depends on your taste – Maximus sauce is on the hot side – with a wash of beer cooked down with a spicy six-pepper blend.  Minimum is on the sweeter end of the spectrum, based on the triad of tamarind, honey and molasses.  I took mine Veg (thank you!) Minimus, with a Minimus drink, and sat in the summer sunshine watching dozens of other pig-worshipper passers-by come and go.  The Pigmobile was at the corner of 2nd and Pine – where it rests most days between 11am-3pm.  But if you want to make sure you catch it, sign up for twitter or facebook updates on their website – this little piggy gets around!

The article on L’Apéro in the May|June issue should have stated Chef Andrea Maiolo staged at The Courtney Room and Zambri’s and that he held the ...
Read More
May|June issue on the stands. Read ...
Read More
There is something so romantic about cheese, and not just the love that goes behind into it, cheese is so… decadent, sensual even. Casanova (the ...
Read More