Wine Country, Vintner’s Valley, Napa of the North…all phrases used to describe the Okanagan Valley. Not a surprise when you consider the region is home to more than 200 wineries and hundreds of wine events every year showcasing the best ‘crush’ from the Valley’s vines.

However, it wasn’t wine being poured into glasses on top Big White Ski Resort Mountain on a crisp and clear evening in February. The resort may be known for champagne powder on its ski slopes, but it focused on another beverage for its inaugural Bartender Showdown.

13 bartenders from the Okanagan, Vancouver and Whistler went shot glass to shot glass to come up with the best cocktail recipe. Their only rule: use an ABSOLUT product. The vodka maker sponsored the event offering the bartenders not only the necessary ingredients but also a trip to their vodka headquarters in Sweden.

Left in grey: is Jacob Sweetapple from ABSOLUT.
Right in the black and bow tie: Grant Sceney the winner.

ABSOLUT even supplied their own emcee for the evening, Jacob Sweetapple, who insisted the event was perfect timing for the company to capitalize on a growing demand for their products in the Okanagan. “Partnering with Big White gave us a unique opportunity to submerse the bartenders in an experience they will remember forever.”

A unique opportunity was exactly what events and marketing powerhouse Christina Ferreira was looking for. After spending 10 years coordinating the four annual festivals for the Okanagan Wine Festivals Society, Ferreira wanted to bring something new to the glass.

“In the Okanagan we have wine festivals, we have beer festivals, we have scotch festivals but we don’t ever have a venue that puts it all together. This event is about variety. So while the people here tonight are watching the bartenders they also get to try local beer, wine and spirits, and of course ABSOLUT products.” That’s not to say there wasn’t a place for wine at the showdown. After all, Ferreira’s family owns the award-winning Quinta Ferreira winery in the South Okanagan, plus she is on the verge of launching her own winery, Squeezed. But, Ferreira was looking to showcase a little more of what the Okanagan had to offer than just what came off the vine, “There is a definite demand for it, the cocktail culture.”

It would seem Ferreira and Sweetapple were right on the money. 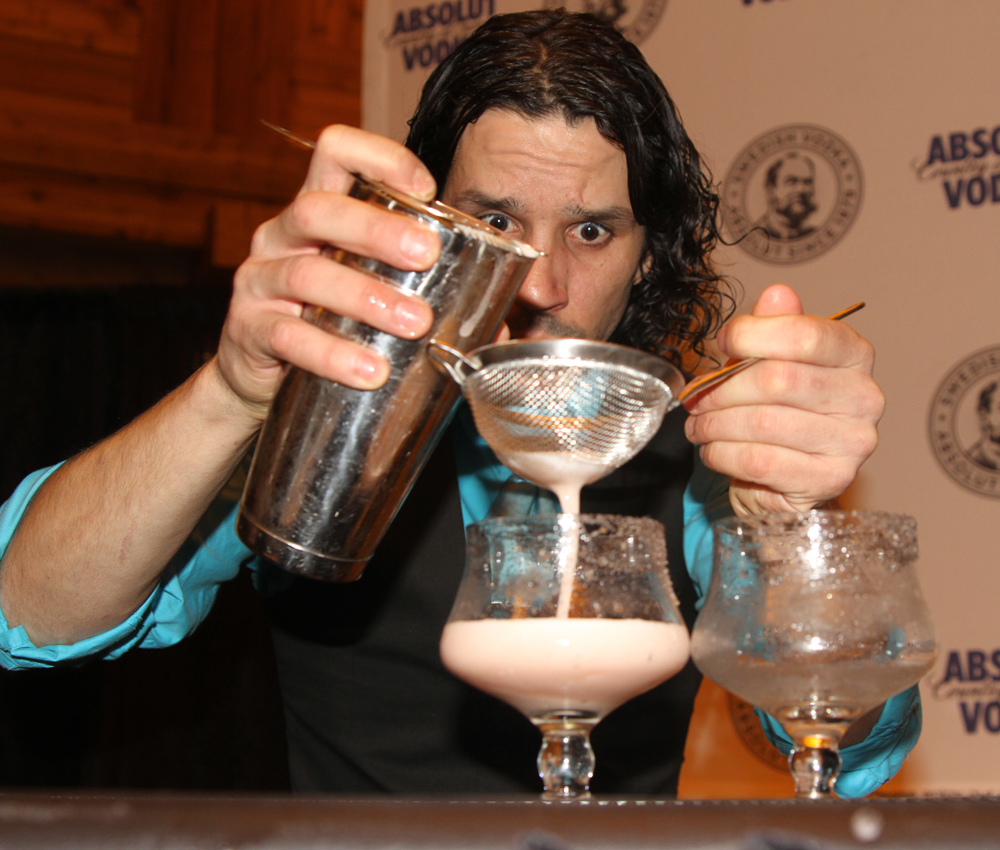 350 people packed into The Market at Big White to witness who would take top honors as ABSOLUTE Bartender.

The 13 competitors were shortlisted from more than 50 recipes submitted. The finalists had to create their concoctions center stage in front of the sold out crowd and a panel of four judges. With the only requirement being the use of the sponsor’s product as part of the recipe, the mixologists let their creative juices flow using ingredients like egg whites, essence of Douglas Fir, edible flowers and even some champagne powder from the slopes a few feet away.

But in the end it was Grant Sceney’s ‘Absolut Beta’ that stole the show and the judges’ points (Grant Sceney is the bartender at The Fairmont Pacific Rim).

“It is a big thing for a bartender to win a competition of this size, not just because of the prize but the recognition and respect from your peers and the community.”

As for next year? Ferreira says the showdown will be back…even bigger.
—BY JESSICA SAMUELS

Build all ingredients into cocktail shaker. Dry shake without ice, and ice and shake hard again.

With Phase 2 beginning, restaurants and patios, tasting rooms and coffee shops are reopening. This is an ongoing process, with many changes, so we ...
Read More
SOUTHERN VANCOUVER ISLAND In celebration of FarmFolk CityFolk’s 20th Year Anniversary, we would like to give away 2 free tickets to ...
Read More