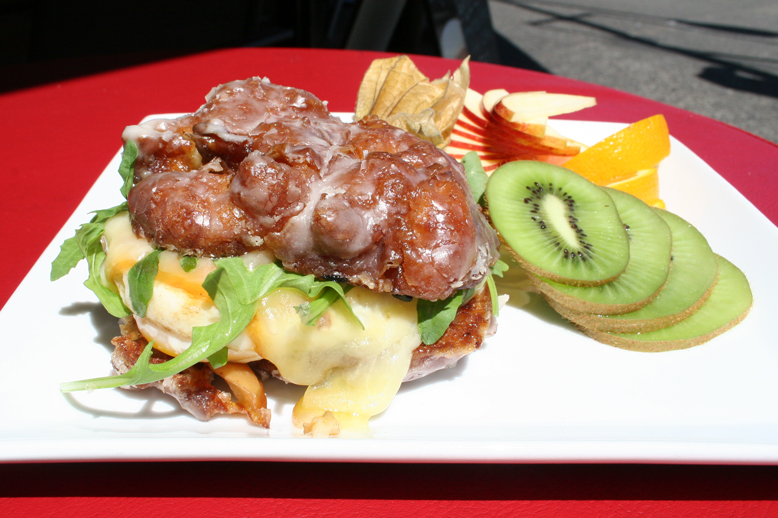 Back when I was a scholar, I spent three years following Odysseus’ adventures around the Bronze Age Mediterranean, scratching notes as I went on my rumpled notepad. One of the most difficult aspects of the exercise was suffering through the propensity of the ancient Ithacans to stop on every island, sacrifice some wayward animal, and then cut it into cubes and roast it on an open fire. I was living in Greektown in Toronto at the time and, more often than not, I was forced to jump up and follow the Siren call to devour souvlaki at a nearby restaurant. 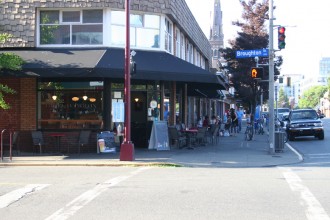 At that time, I was also a devotee of the delightful cookbook The Oldest Cuisine in the World by Jean Bottéro, featuring his translations of ancient Mesopotamian recipes. What we learn from these ancient sources on eating is that both Greeks and Mesopotamians, innovators in the crafts of wine and beer production, were also early adopters of the art of hangover cooking. The ancient recipes were fatty, and dense, and likely designed to soak up whatever debauchery had befallen the night before.

The hangover tradition dates back 4000 years, we know that now. As long as drink is a companion to food we will need to have morning cures readily available. As a test of how such traditions manifest themselves in the modern world, I spent a sudsy weekend on Salt Spring Island and then lumbered, in heavy sunglasses, into Clay Pigeon on a Monday morning to try their fritt-wich sandwich.

The fritt-wich, a hearty indulgence if ever there was one, came to co-owner Jeffrey Weatherhead one night in a dream. Clay Pigeon, which was already serving a variety of light and healthy meals, along with its fine homemade sodas, needed something heavy and slightly sinful to balance out the menu. The result is a breakfast sandwich consisting of an egg (as the customer likes it, although I prefer overeasy), cheese, bacon jam, and a few sprigs of arugula (to keep it honest), served inside a slightly grilled fritter. 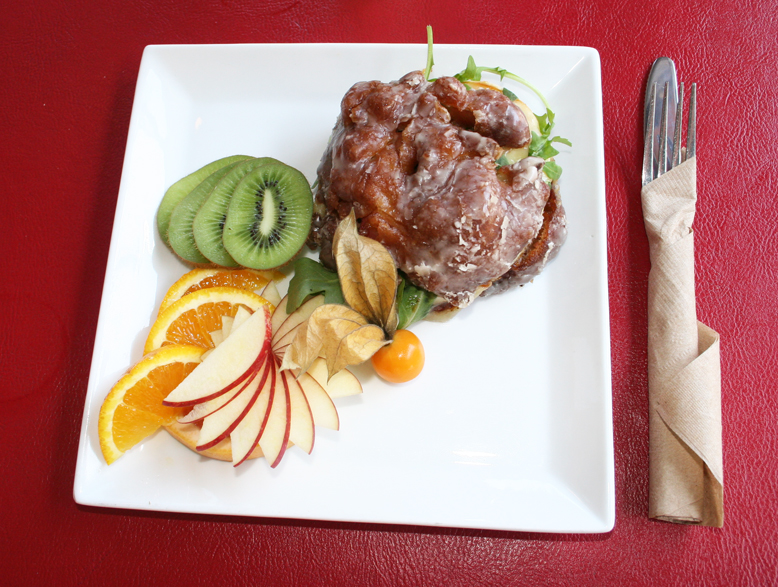 Both the fritter and the bacon jam are made at the restaurant. Weatherhead pulls out his book of secret recipes and shows me the ingredients… but I keep secrets secret. Perhaps some scholar will write of them in another 4000 years. The fritt-wich presents a wonderful balance of crunch and cheesiness and sugar and fat. It was exactly the sort of thing my body needed at that moment — the sort of dish that makes one chase the last sticky crumbs around the plate when it is over. The fritt-wich isn’t for people on a diet, to be sure, but those people can always have one of Clay Pigeon’s lovely salads, instead.

I’ve been growing quite fond of Clay Pigeon lately, for a few reasons. I like sitting at the bar and having a drink, and I like just as much sitting out on the patio and having a cup of tea in the afternoon. As I ate my breakfast, I had a good chat with Weatherhead about his time apprenticing in Caribbean kitchens, and about his philosophy of cooking in general. Restaurants like this are fun because they are always trying to invent and improve themselves. Plus, a good hangover cure is a secret worth knowing.

Editors Note: Also check out the feature in the print magazine about The Clay Pigeon’s Devil’d Eggs. Here.

It’s been a while since I had any proper dirt. I’ve been living in the deep city and growing everything on my windowsills in small pots. For a ...
Read More