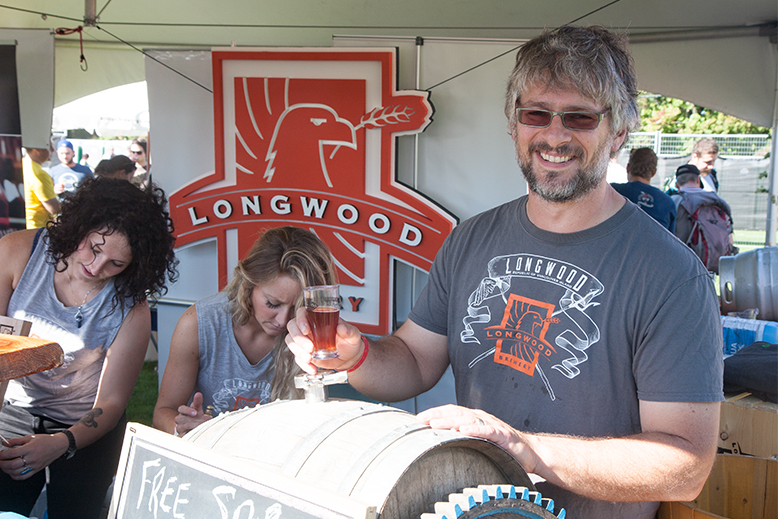 “IPAs, pilsners, barley wines and blondes, yes yes, but have you tried a sour beer?”

Victoria welcomed the Great Canadian Beer Festival once again this year as it has since 1993, and as usual it more than fulfilled its mandate of introducing us to some of the most exciting flavours in the world of malted grains. There were certainly some punchy IPAs, but as a self-proclaimed hop-hater, I was delighted to find that many of this year’s 65 breweries had found a fresh angle to explore. “It’s really exploded this year,” said Granville Island brewmaster Kevin Emms. “Some people are dubbing it the year of the sour.”

Before Louis Pasteur invented his namesake, and Emil Christian Hansen discovered and isolated specific strains of brewing yeast, making a consistent beer was a bit of a crapshoot. Beers were unpasteurized and brewed in non-sterile conditions, making them vulnerable to colonization by wild bacteria and yeasts. In fact, one of the reasons hops became popular about 300 years ago was due to their antibacterial properties; they fought off unwanted bacteria and allowed the two brewer’s yeasts, Saccharomyces cerevisiae (ale) or Saccharomyces pastorianus (lager) to work unimpeded.

However, some brewers found the flavours created by these wild organisms to be surprisingly delicious, and cultured them to create sour beers. “Historically, they’ve been around for hundreds of years,” said Iain Hill, co-owner of Strange Fellows Brewery and an old hand at making Oud Bruin. “There’s always been sour beer, especially in Belgium.” Despite their ignorance of microbiology, these mavericks were able to turn out uniquely flavoured styles of beer by creating special local conditions, just as cheese mongers do in caves throughout Europe. This tradition of cultured yet wild organisms is where we get the Belgian lambic, German gose and Iain’s favourite, the Flemish beer Oud Bruin.

So why are sours now making a comeback? Asking around at the festival, the consensus seems to be that the palates of Canadian craft fans (at least here in BC) have gone beyond hops, searching for the next flavour sensation. This demand (and brewers’ own curiosity) has driven breweries back to the age of wild yeast. After all, the world of microbiology is still wide open, and scientists isolate more unique strains every year.

Brettanomyces claussenii, for example, was originally a wild yeast common in old stock English beer. The slight tartness of Strange Fellow’s festival-only Cuvée came from the acetic acid Brettanomyces produces as a byproduct of fermentation. And some of the most common historical culprits for spoilage are Pediococcus and Lactobacillus, especially L. casei and L. brevis, which produce lactic acid. These formerly unwanted pests are now another exciting tool in the brewer’s arsenal. “It’s like discovering a thousand new varieties of hops all at once,” said Tommie Grant, head brewer at Spinnakers. “There’s so many different ways you can go.”

There are two big types of sour beers, both of which were on tap this year. The historical classic is an aged sour, in which the acid-producing organisms are added “after the boil”, as the same time as traditional yeasts. These beers may be exposed to the elements or to inoculated wooden barrels, both of which encourage wild organisms to grow. They are then aged for anywhere from months to years.

“It adds a lot of complexity and depth to it, so you can sit there and spend 15 minutes drinking it,” said Pete Kis-toth, head of quality control at Longwood. But even with modern brewing practices, the process is hard to control, and it doesn’t always turn out. Longwood’s 18-month aged Wild Child Cascade Berry Sour certainly did however, coming out smooth, creamy and a little tart, with richness like thick milk. “This could’ve all gone down the drain, which is the risk you take with letting your beer go crazy and do what it does,” said Pete. “We didn’t control it very much. That’s kind of the fun of it, to see where it comes out to.”

Another aged standout was Spinnakers cheekily-named Oud Brewin, a Belgian porter casked in cabernet barrels and aged in the brewpub’s own barrel cellar. “There’s some funky stuff going on in there,” said Tommie. It was big and rich with oatmeal flavour, but the tartness banished my concerns about the typical flat & mellow stout. The tartness of sours tends to be found more commonly in lighter beers, but there have been a number of darker, maltier brews becoming popular in the US. According to Tommie, the Oud Brewin was inspired by Tart of Darkness, a sour stout from Orange County’s The Bruery. “It just… It totally makes you rethink what beer is and what beer can taste like.” Driftwood’s malty Obscuritas was another great example from their barreling program and Bird of Prey sour lineup. 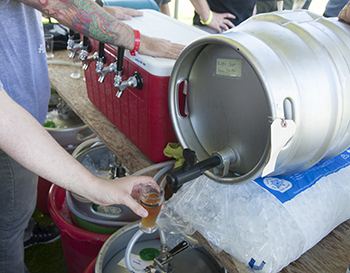 Kettle souring, on the other hand, involves souring the wort first with specific organisms before boiling and fermenting normally with regular yeast. This process is much faster and gives the brewer far more control. Four Winds’ classic-style Berliner Weisse, Granville Island’s Gosebumps, Stanley Park’s Gooseberry Gose and Tofino Brewing’s Hunt & Gather are all examples of this style, but upstart brewers Axe & Barrel’s Kettle Sour Spruce Tip Ale was my favourite; shockingly fruity, with a semi-flat carbonation and watermelon aftertaste.

Head Brewer Dave Woodward makes his own lactose-free yogurt at home, and bred his own lactobacillus delbrueckii for the kettle souring. “It’s a lot easier to do for a brewer, rather than taking months and months and multiple different types of bacteria, and then potential sanitation risks in the brewery,” said Dave. “You don’t have none of that, you can sour it in 12-8 hours. It’s just simple and straightforward, but it’s a base, it’s something you can build upon. You can add fruits that work well, spruce tips, sky’s the limit really.”

If I had my way, we’d see far more of both types on liquor store shelves year-round, and from what this year’s brewers told me I just might be in luck.“Sour beers are pretty popular right now, and as much as it is a trend I think it’s something that’s gonna stick around,” said Brent Mills, Head Brewer at Four Winds. “It’s got a lot of complexities to it without being really strong.” Iain agreed with him. “Sour beers are really on the one hand unique and special and delicious and new, but they’re also fairly approachable, depending on how you craft it. They’re really refreshing, but they’ve still got a lot going on.”

The article on L’Apéro in the May|June issue should have stated Chef Andrea Maiolo staged at The Courtney Room and Zambri’s and that he held the ...
Read More
May|June issue on the stands. Read ...
Read More
VANCOUVER Once could say that the street food scene in Vancouver has undergone a renaissance in the last three years, but that wouldn’t be ...
Read More