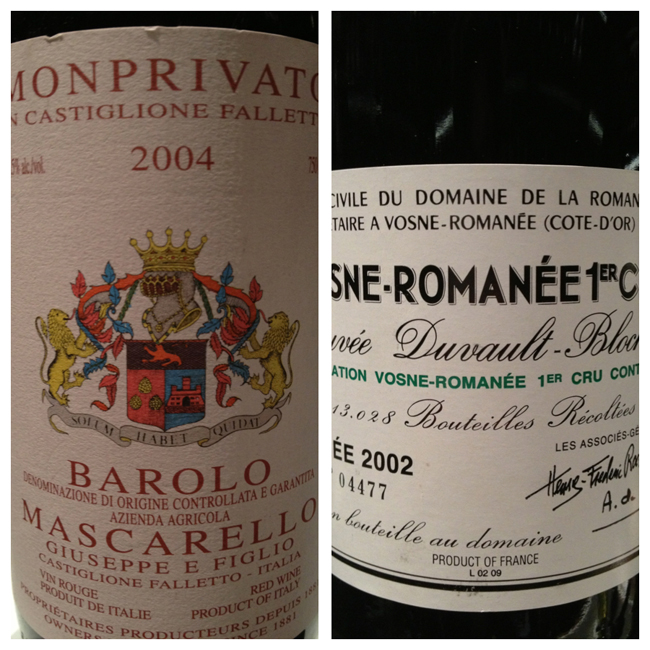 Somm in the City: Burgundy & Barolo

There are guests that come into the restaurant and know so much about a particular wine region that it makes me step back in envy. Getting to know such people and tasting the wines they bring greatly furthers my enjoyment and knowledge of wine.

Over the past two years I have been lucky enough to taste some textbook examples of red and white Burgundy. The more I taste, the more I read and the more I study maps, the more I learn. It is a constant circle. I will never admit to know as much as the top authorities in Burgundy, but my understanding is growing with every glass.

A region that I have been personally fond of this past winter is Barolo. Nestled in the hills of Piedmont just outside of Turino, Italy are a number of small of vineyards where the Nebbiolo grape is at home.

During a recent Barolo themed dinner, I began to notice some striking similarities between the Pinot Noirs of Burgundy and the Nebbiolos of Barolo.

The labelling of both wines is similar too. Vineyard names are very important and are stated clearly on the label. And because these vineyards are all so small, the better the vineyard the higher the price; supply and demand plays a large role in pricing. There are 835 acres of Nebbiolo in Northern Piedmont while there are 26,418 acres in of Pinot Noir in Burgundy. Considering the tiny amount of Barolo made, it is still a relative value compared to Burgundy.

One of the key components to any great wine is soil. In Burgundy it means the difference between Grand Cru and Village level wines. In Barolo, the difference between vineyards is equally noticeable. The Torontian soils around the northeastern town of La Mora produce wines that tend to be much more floral and aromatic, while around the southeast region of Serralunga the Helvetian soils are much less fertile and often produce wines that need longer time in bottle to open up.

Both the Pinot Noir and Nebbiolo grapes are fickle. They are thin-skinned and temperamental and at the best of times, difficult to grow. Both regions can produce long-lived wines of outstanding quality. Much of the magic happens in the vineyard. Training and pruning are vital in both regions to produce exceptional fruit that a winemaker can transform into distinctive wines.

I can’t think of another two regions that are so unique and distinctive as Burgundy and Barolo; the fragmented vineyards, the distinct differences in soil and the star single grape variety. And I am not the only one who thinks so. According to Jancis Robinson’s book Wine Grapes, “Nebbiolo is rivaled only by Pinot Noir in its ability to express the subtleties of different terroirs, which is why these two zones have been so assiduously divided into named crus.” One thing is for sure – each wine tells a distinct story of where it came from.

Somm in the City

The article on L’Apéro in the May|June issue should have stated Chef Andrea Maiolo staged at The Courtney Room and Zambri’s and that he held the ...
Read More
May|June issue on the stands. Read ...
Read More
DRINK editor Treve Ring asks local wine experts how they would approach pairing dishes and flavours. For this holiday edition, we are pairing to both ...
Read More