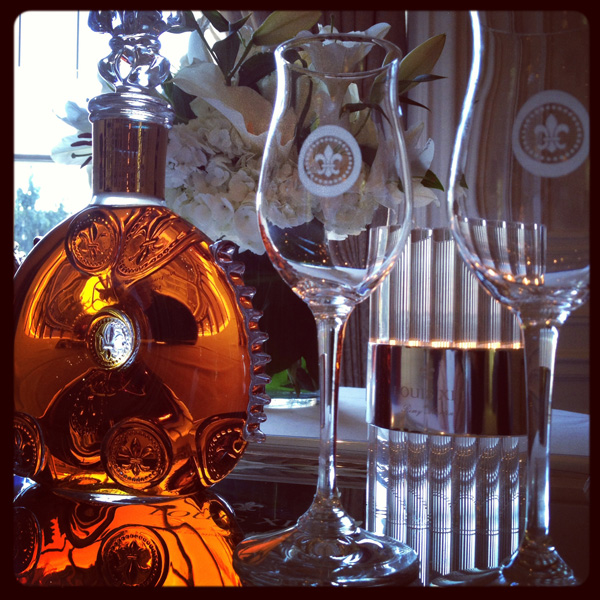 Some meals end with brandy. My week of tasting started with it. And not just any brandy, mind you. The week kicked off with Louie XIII, one of Rémy Martin’s top brandies.

A very well dressed Alexandre Quintin, an International Brand Ambassador for the House of Rémy Martin, walked a group of sommeliers and bartenders through the history and a tutored tasting of Louie XIII. Top quality brandy is made from distilled wine that is aged in barrels for a very long time, resulting in colour, flavours and texture that is simply sublime. In the case of Louie XIII the average brandy is 40-100 years old.

Usually my brandy drinking happens at 11pm, not 11am! But as we were told, 11am and 5pm is when the cellar master tastes newly distilled eau de vie each day in the caves. This is thought to be the time when you are furthest from food and your palate is the freshest.

In the 1988 movie Cocktail, Tom Cruise accepts a wager for a bottle Louie XIII. At the time he remarked that $500 for a bottle of brandy was a pretty big bet. Currently a bottle of Louie XIII is $3000 in BC. Rarity and the laws of supply and demand keep the price high. When asked about the total production, I was told that “rarity is subjective, so the annual production is kept a secret.”

Another reason for the high price is the hand-made Baccarat crystal and the 24 karat gold neck label. It is distinctive and unique and makes a great addition to any bar (if you have the wherewithal or win a bet that is).

The next day was even earlier, but there was more than one drink. This day started with a Barolo tasting with one of the Barolo’s top producers, Luca Currado of Vietti. He was in this market last year and I was equally as captivated then with his enthusiasm and story telling. His thick Italian accent filled the large room with stories of the wines and an detailed sense of a place, and tasting the wines together made me feel like I was actually in the vineyard. Vietti owns land in 20 grand cru vineyards, more than any other producer in Barolo. Annual production is 20,000 cases and it was apparent that each wine was meticulously cared for along each step of production.

We were lucky enough to taste many of the single vineyard wines from the  2010 vintage. The wines will not be released until next year, but by many accounts 2010 was one of the best vintages in the last decade, on par with 2006 and 2001. We were a fortunate group indeed – the last time he did a vintage tasting like this was in 2010 with Antonio Galloni for the 2007 vintage. His report can be found here.

But one can’t linger in Italy forever. After this it was off to a BC comparative tasting, consisting of 2 flights, Chardonnay and Pinot Noir. Each flight had 6 wines, 3 from BC and the others international. The idea was to see how BC wines compared to wines from around the world. Master of Wine Rhys Pender chose the wines and led us through this tasting. We looked at value, and of course, taste. Did these wines represent value when tasted along side what could be considered “classic” examples of the same wines from different regions? The room was full of discussion and very good points from all who attended. Price versus value is always a hot topic when it comes to BC wines. They are often seen as too high in price compared to what else is being offered in this market. However the two flights were fair in value by comparison and showed good quality (see below for wines poured).

But this day was not done yet. Timothy Sullivan was in town to promote Hakkaisan Sake and he was hosting a tasting. Having only read about him on his website, I was excited to met him. Based in New York, he is a “white guy” that knows the secrets of sake. In October 2007 he was invited to Kyoto by the Japan Sake Brewer’s Association Jr. Council to be named a “Sake Samurai” for his efforts in promoting sake outside Japan. Hakkaisan Brewery is one of Japan’s largest, and all of their sakes were poured at the tasting. After a long day of tasting, I was thrilled to enjoy Minami’s aburi style sushi while Tim answered questions about sake.

Drinks from four distinct and diverse countries and in two days – I travel in a glass, and it is always half full!

Somm in the City

The article on L’Apéro in the May|June issue should have stated Chef Andrea Maiolo staged at The Courtney Room and Zambri’s and that he held the ...
Read More
May|June issue on the stands. Read ...
Read More
Alt Rock Dining Victoria, BC We’re approaching that time of year when the days are getting shorter, the beach visits less frequent, and the reality ...
Read More