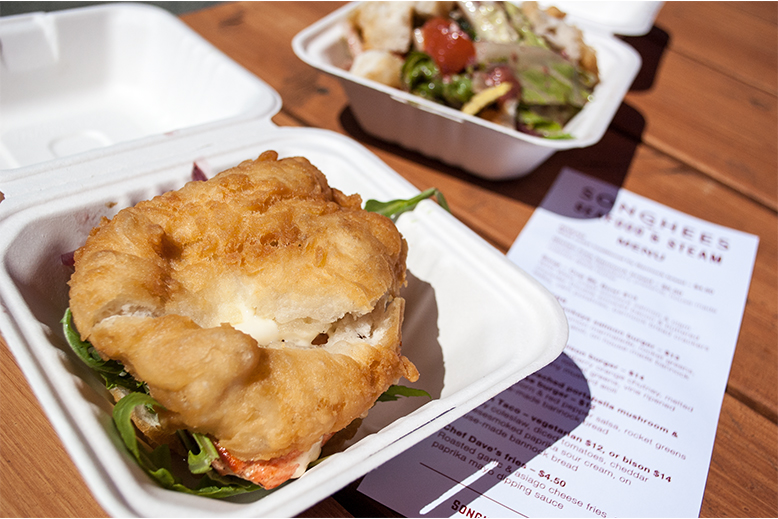 As Lekwungen traditional dancers ushered in the opening of Songhees Seafood and Steam –one of Canada’s first Aboriginal food truck – the smell of frying bannock lingered over an eager crowd. On a hot and sunny day spring day, the landmark truck opened its windows to the hungry public.

Found on the grassy hills overlooking the harbour of Victoria Clipper Vacations, the truck is the culminated joint efforts of the Clipper and the Songhees Nation. Merideth Tall, founder of Clipper Vacations, described the almost destiny-like happenstance of approaching Ron Sam, the Chief of the Songhees Nation, only to find that he had been pondering starting a food truck for years. After mentioning her love of street food she said that, “We already had the location, we had the truck, we had the idea. Then we came to [the Songhees Nation] asking if they would be interested in being a part of a joint venture.”

David Roger, who left his position as Executive Chef of the Marriott Inner Harbour be the truck’s chef, describes his take as “a little bit of a modern twist” on traditional fair. While trying to keep it as grassroots as possible, Roger is offering traditional fried bannock, as well as gluten-free varieties. A range of salmon, bison, or mushroom burgers come with a bannock bun, as well the truck offers salads, West Coast chowder, and Indian tacos. 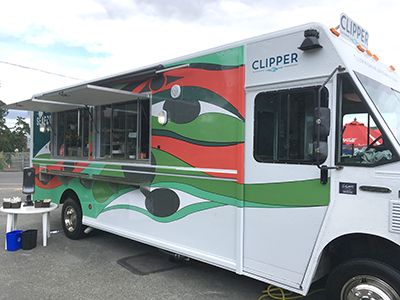 The bannock, being at the base of many of their dishes, is no pedestrian fried bread. Forget the tough, fried dough texture that you may come to expect and instead imagine a lighter, airier variety. Like comparing biscuits to croissants, this was something different. Trying the bannock salmon burger, the aforementioned star, was crispier than I was anticipating. There were air pockets that broke in crackly bites as the salmon flaked away and citric mayo spilled out. It was a messy endeavor by the end of it.

Feeling like summer had arrived already, I opted for salad over fries. The crispy romaine salad reads like a caesar, but presents itself quite differently. The tart Saskatoon berry vinaigrette lends itself nicely to the creamy Salt Spring Island goat cheese, however, the candied onions took an unfortunate back seat to all of this. Topping the salad was more of the amazing bannock in the form of croutons, however, when mixed with the rest of the salad became tragically soggy.

Curiosity, and the pleas of a celiac partner, got the better of me as I departed trying the gluten-free bannock option. While resembling something closer to the doughy textures I’m used to, and not the airy one I’ve now been spoiled with, the gluten-free option is not as good, though still quite amazing when paired with the house-made apple butter.

It’s not everyday that the public gets to experience something that is both an amazing food truck, and a positive force for social change. Under the tutelage of Roger, Songhees’ youth are participating in culinary training through the truck that will soon extend to catering the Songhees Wellness Centre as well. Roger pointed out that if the youth enjoy the start of this culinary career path, they could even perform their Red Seal under him.

As for the truck itself, it has a busy future planned as both parties involved have said they wish to take the vehicle out to community cultural events. “We have a lot of people that pass through this terminal every day,” said Tall. “We’ve got hundreds of thousands of people in any given summer and I would love to expose them to something that pre-existed Clipper’s arrival.”

Superflux Cabana has opened upstairs at 804 Broughton St (the former location of The Livet). Featuring lots of Superflux beer and a menu that ...
Read More
January|February issue is on the stands! Pick up a copy, or read the digital version. Read ...
Read More
A San Francisco Tradition arrives in Kelowna. Since 2004, Okanagan Grocery Artisan Breads has been one of the best sources for hand-baked breads in ...
Read More