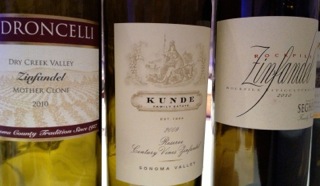 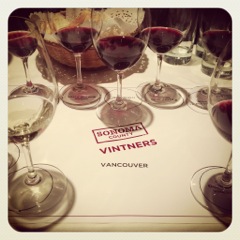 Sonoma County has their own off shore bank, but the coffers do not contain the usual currency. Instead there is an upwelling of cold water that fills the fog bank just of the coast of Sonoma, caused by a sharp drop off in Pacific Ocean floor. The warm surface water is pushed further south by the flow of the cold deep ocean currents, creating cooling fog. At the southern part of the valley the Petaluma gap ushers in the fog each morning, while the afternoon sun chases it away.

The diurnal temperature swing can be as much as 35 degrees in the summer. The cool nights and mornings give the wines a vibrant backbone of acidity and freshness while the afternoon warmth allow the grapes to fully ripen.

Fog and temperature are not the only contributing factors when it comes to growing grapes in Sonoma. As an appellation on a major fault line, the San Andreas, there are many soil types. Rumour has it that there are more soil types in the Russian River Valley than there are in all of Burgundy. Add some altitude to the mix and you have a recipe for wide diversity of wines.

As part of the travelling Sonoma wine show held in select cities across Canada this November, three winery owners walked us through some of these differences in growing conditions, illustrated through a flight of some of their own wines alongside some of their favorite from the valley.

Dan Kosta from Kosta Browne winery showed three pinots that demonstrate typicity in Sonoma as a whole and the individuality of smaller AVAs. Siduri Pinot Noir from Russian River valley 2011 showed bright red fruit, characteristic from Russian River Valley. Light in colour, it had structure and elegance. Another example from the Russian River Valley was from the 2010 J Vineyards and Winery Pinot Noir. This is winemaker Melissa Stackhouse’s first full vintage since her departure from La Crema. And finally Kosta Browne 2010 Pinot Noir from the Sonoma Coast appellation. This is from a low-lying region, and typical to the Kosta Browne style was the deepest in colour and fullest in body.

Next up was Chariman Jeff Kunde from Kunde Family Estate who brought some of the golden state’s vinous claim to fame, Zinfandel. Three examples where tasted to show the difference in variety of soil, location and how some of the different climatic influences affect the wine in the glass. The 2010 Pedroncelli Mother Clone from Dry Creek Valley, close to the north of Sonoma, had 8% Petite Sirah and expressed lots of dark berry notes on the nose. It also added some tannin and structure to the notably thin skinned grape. Next up was the 2010 Segues Family Vineyard from the Rockpile AVA in the far north of Sonoma county. This wine spent some time in French oak, providing it additional elegance and structure. In this flight it was the Zinfandel grown at the highest elevation. Finally the 2009 Kunde Family Estate Century Old Vine from Sonoma Valley was a ripe, fruity example. Kunde’s far-reaching sustainable practices extend from the vineyard into the winery.

In the last flight, Bettina Sichel, proprietor of Laurel Glen Winery, showed a collection of Cabernet Sauvignon from three AVAs in Sonoma. Her own 2009 Laurel Glen Vineyard Cab from Sonoma Mountain AVA in the south-east corner of Sonoma was fresh and full of blackberry and cedar notes. One of the bigger wineries, Rodney Strong 2009 Alexander’s Crown from Alexander Valley was much heavier and richer in style. The 2007 Ehret Family Vineyards from Knights Valley was the star of the flight in many eyes. For its age it was full of class and hidden nuances that keep my nose going back to the glass.

Much of Sonoma is still rugged and untamed landscape with only 6% of the total area planted to grapes. Its proximity to San Francisco makes it an ideal destination for wine tourism – so much so that the Tripadvisor has named Sonoma County the Travellers’ Choice 2012 Winner for Wine Destinations.

There is no doubt that Sonoma is a place with natural beauty and a bounty of wines. Don’t let the morning fog deter you – it is responsible for many delicious and diverse wines. Your own personal experience bank will be richer for it.

With Phase 2 beginning, restaurants and patios, tasting rooms and coffee shops are reopening. This is an ongoing process, with many changes, so we ...
Read More
I began my investigation into the strange world of artisanal dog biscuits with some degree of skepticism.  After all, dogs generally have no ...
Read More