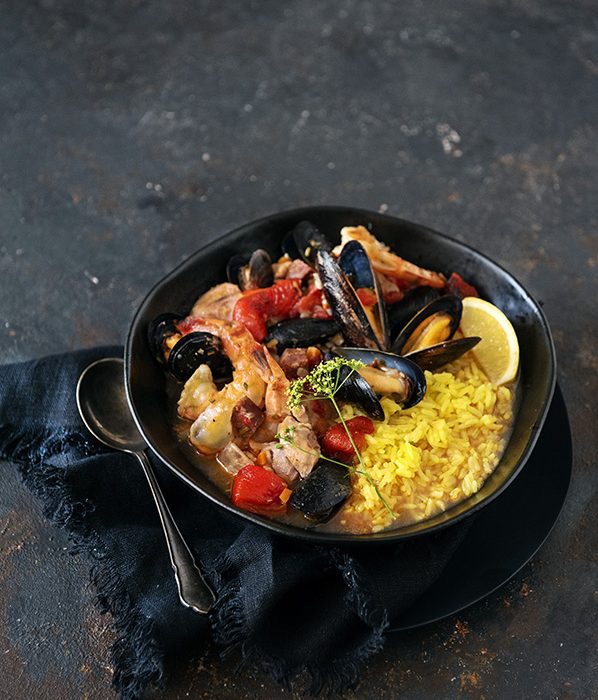 Try the iconic Valencian dish as a hearty fall soup brimming with seafood and chorizo.

We were going through a heat wave in Victoria when I was brainstorming recipes for this September/October issue. It was hard to imagine eating (never mind cooking) soup, but I knew that once autumn rolled around, it would be exactly what I wanted. Something delicious and warming, deep and satisfying with layers of flavours.

What inspired me was a reminder of EAT founder Gary Hynes’s Mussels, Spicy Sausage, and Fava Bean Soup. It was a recipe he created for his award-winning restaurant at The Cooper’s Inn, which he ran with his wife, Cynthia (EAT Magazine’s current editor), in Shelburne, Nova Scotia. I loved the idea of combining sausage and seafood, and I couldn’t think of a better way to honour Gary. As one of my favourite dishes is an authentic seafood paella, I decided to combine the idea of Gary’s soup with the rich flavours of the famous Spanish dish. I also wanted to skip some of the more technical aspects of paella-making and be able to make it without the specific paella pan.

This recipe is adaptable and if you have clams instead of mussels, use those, adjusting the cook time. If you have white fish instead of chicken, that works, too. Be sure to add it at the end, with the shellfish. The chorizo can be crumbled instead of cut if you prefer, but make sure it is the smoked type and not raw sausage. (I got mine from The Whole Beast.)

As much as I appreciate a quick dinner, if you read my recipes regularly, you will know that I do not shy away from some long-simmering dishes. This may be one of those. Admittedly, it does take a bit of time, and some work, and if you have a weekend afternoon, I recommend taking it on. You won’t regret it.

In a mortar and pestle, grind the saffron until almost powdered (or crush it with the back of a spoon). Stir in one tablespoon warm water and let sit for 5 minutes.

In a medium pot over medium-high heat, melt the coconut oil or butter. Stir in the rice and bay leaf until coated. Increase the heat to high and pour in the saffron water, chicken stock, and salt. Bring to a boil, reduce to a simmer, cover and cook for 15 minutes. (Or follow rice-to-liquid ratio directions on the rice package.)

Remove from heat, leave covered for 10 minutes, remove the bay leaf, then fluff with a fork and set aside, covered to keep warm.

Lemon wedges and parsley for garnish

Heat the olive oil in a large Dutch oven over medium-low heat. Add the onion, celery, and carrot and cook until vegetables are softened, about 20 minutes. Adjust the heat to avoid browning them too much.

Stir in the garlic, the rosemary, and the smoked paprika and cook for another minute.

Stir in the chicken thighs and the chorizo. Cook for about 5 minutes, stirring regularly. Increase the heat to medium-high and add the chicken stock and the wine. Bring to a simmer and cook until the liquid is reduced by about one-third, 7-10 minutes. Stir in the tomatoes and roasted red pepper. At this point, taste the broth and season with salt if needed. Don’t forget the shellfish will add a bit of saltiness. Grind in some black pepper.

Bring the liquid to a boil. As soon as the boil is reached, transfer the mussels and prawns to the pot and cover. Cook until prawns are pink and mussels have opened, 4-5 minutes. Discard any unopened mussels. Remove from heat and stir in the lemon zest and lemon juice.

To assemble, divide the rice between 6 shallow bowls and spoon the soup over top. Garnish with lemon wedges and chopped parsley. Serve immediately.

November | December issue on the stands. Read ...
Read More
For the ninth year in a row Rancho Vignola is setting up its Vancouver Island Harvest Sale here at the Mary Winspear Center in Sidney. Many of ...
Read More
Season’s Greetings EAT readers! We at EAT are looking forward to all the wonderful seasonal baking on offer around the city. One of the great joys ...
Read More
Masterclass Candied Citrus Holiday ...
Read More
photo: Pho Ga at Pho Vuong – credit: Rebecca Baugniet It’s a little embarrassing to admit, but it’s true. Up until this week, I was a Pho ...
Read More