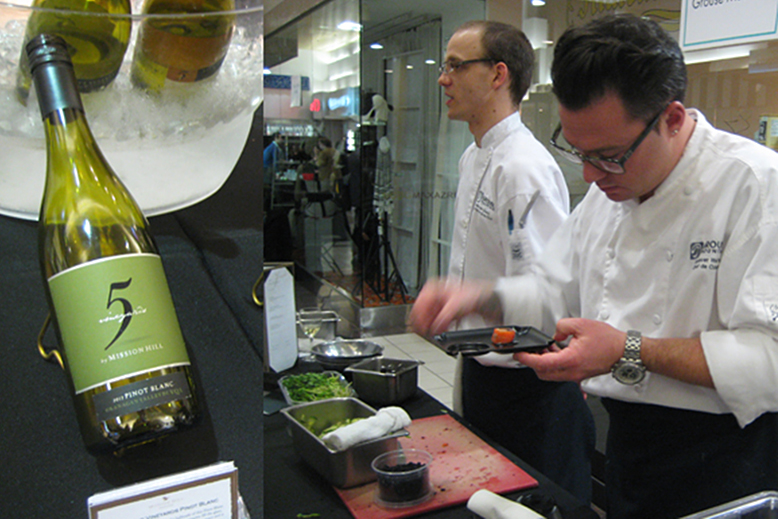 The 12th annual North Shore Rotary Wine and Food Festival saw an impressive turnout of wine merchants and food vendors on Saturday evening.  The charitable event, with proceeds supporting the North Shore Youth Safe House and other Rotary humanitarian projects, did not disappoint when it came to tasty nibbles, fantastic wines and live music. Held at Park Royal in West Vancouver, the tasting tables stretched the length of the mall with 144 wines from Canada and across the globe to taste and 21 food vendors to try.  The $60 ticket included a $10 cab voucher to get folks home safely, post wine-tasting—a very smart idea.

“People got their money’s worth,” Rotary event coordinator David Spears said at the end of the evening.  “But because this was a charitable event, the big downside was turnout,” he continued, adding numbers were down about 200 from last year. 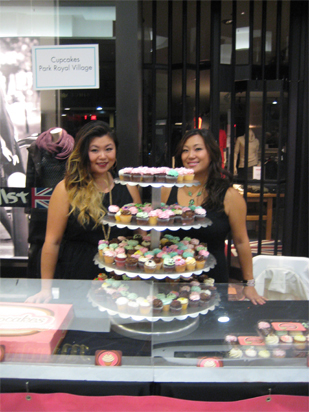 From luscious Argentinian Malbecs to crisp BC whites, the quantity and quality of wines was overwhelming. Notable local wineries Blasted Church and Mission Hill were prominently featured, as well as many imports from Australia, Italy and most places in between. A standout in BC wines was Tantalus Riesling 2012 ($23 at BC VOA). With a bright, high acidity this classic Riesling showcased by The Wine Syndicate was a fan favourite. 40 Creek Distillery offered a taste of its new Cream Liquor for those who needed a break from the vino. The chocolate, vanilla and caramel notes of this highly rated Canadian whiskey combine with rich dairy cream to produce a velvety smooth liquor without overwhelming sweetness. Tasters agreed that this Canadian gem trumps Baileys.

Food highlights included an impressive mini cupcake tower by the beloved and wildly popular Cupcakes and a smoked sockeye cream cheese pinwheel from The Observatory Grouse Mountain. Chef de Cuisine Spencer Watts built this twist on the familiar party favourite a la minute—the house-smoked sockeye topped with lemon sunomono vinaigrette, then blanketed in sake glaze, topped with activated carbon tempura and garnished with a fresh pea shoot and compressed cucumber hit every part of the palate. “I think it’s great to be involved with the community and show support,” Watts said of charitable event.

Organizer David Spears smiled as he spoke of the North Shore Culinary School, who served up delicious duck canapés throughout the evening. The school is a charitable BCIT sanction organization that offers a culinary education to high risk teens. “The highlight of the event for me was to see all the students there,” he said.

Spears is hopeful that with a little extra marketing—especially over social media—the event will run next year and that attendance will improve.