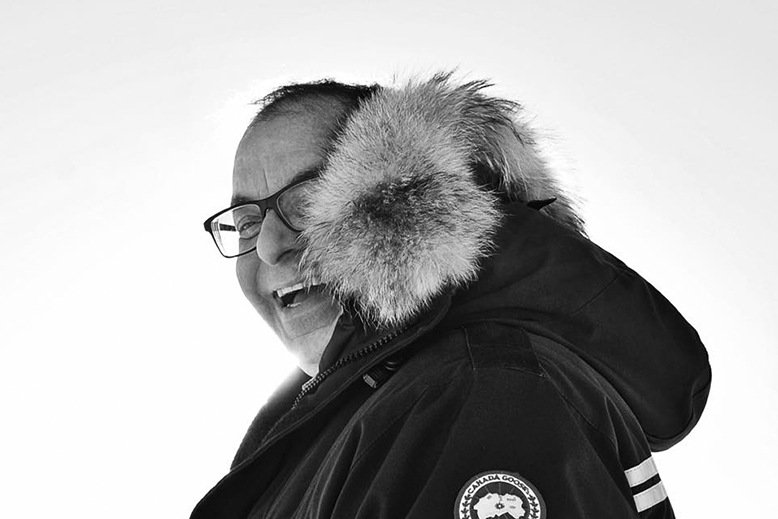 Canadian cuisine – what is it? Is there such a thing? If I asked you what it was would you say poutine, Kraft Dinner, beaver tails, heaps of bacon, maple syrup, butter tarts, ketchup chips and Nanaimo bars? Imagine what an embarrassment of a buffet table that would make – a sea of red, white and brown stretching out before our apologetic Canadian gaze cast down in shame. This is Canadian kitsch. This is a list of soft-shelled stereotypes of our own doing. And then come the shouts of ‘Venison!’ Bison! Caribou!’ Are we not a nation of hard working immigrants, who fought with barren landscapes, dense forests, vast mountain ranges and harsh plains? In these lands we did what we had to do to survive, correct? We are game eaters, you might say: We pull from the sea and feast on halibut, salmon, char, trout and shrimp. I, myself, have never felt more Canadian than when I receive a non-descript chunk of freezer-burnt game meat from a friend and decided ‘I am Canadian. Whether it be moose, deer or question mark, I will cook this, eat this, and serve it to my family.’ You can’t call yourself Canadian unless you have at least one piece of unidentifiable protein at the bottom of your freezer that was gifted to you after an amateur hunter or fisher unloaded a part their haul into the depths of your basement chest freezer.

It would be nice to leave it at that and to write about how Canadians like to hunt and fish and how we are all lumberjacks and game hunters at heart. We could wax poetic about how our top chefs and best restaurants have reinvented Canadian cuisine by serving bison, arctic char and venison. I could use words like ‘rustic’, ‘local’, ‘wild’ and ‘earthy’ and call it a day. However, I would be doing what we have collectively been doing to our history for, lets say, a century and a half, which is white washing our problematic and deeply complex relationship with Aboriginal culture. As early immigrants we learned to harvest the bounty of this land by following the lead of our reluctant aboriginal hosts. As we became a more developed nation we regained the luxury of cooking dishes from our country of origin, importing and growing familiar ingredients and making things like ketchup chips. Why do you think we ended up with KD and poutine as our national dishes? Well, the underlying truth is that while we might laugh at our silly little culinary flaws it’s the same reason we ended up with residential schools. Homogenization, assimilation, colonization. I am by no means comparing cheesy side dishes to the horror of colonialism but food is such a large part of a nation’s identity and the fact that we have erased or discarded a large part of our Canadian history is reflected in the food we identify with today.

The northern food movement is bringing true Canadian cuisine out of the shadows and leading the charge is Steven Cooper. Steven isn’t a chef, nor is he a restaurateur. He is a lawyer with a past and present that has brought him into the lives and culture of Canada’s northern Aboriginal population. Steven moved to the Fort Smith and then to Coral Harbour in the Northwest Territories as a young boy with his parents. The residential school system was in its decline and Sixties Scoop* was just ramping up, cases and class actions that Steven works on today. Having moved to poverty from poverty from the relatively urban locale of the Chemical Valley in Ontario to the wilds of small northern hamlets, Steven and his family had to adjust to a new way of life and a new way of surviving. Much like our immigrant ancestors, the comforts of home were no longer available and they had to to learn how to eat and prepare what is called ‘country food’. Steven recalls that they “ate no proteins that were not harvested: caribou, walrus, bison and ptarmigan”. The family harvested food, picked berries and shopped at the local sparsely stocked grocery store where apples could run about 40 cents a piece. 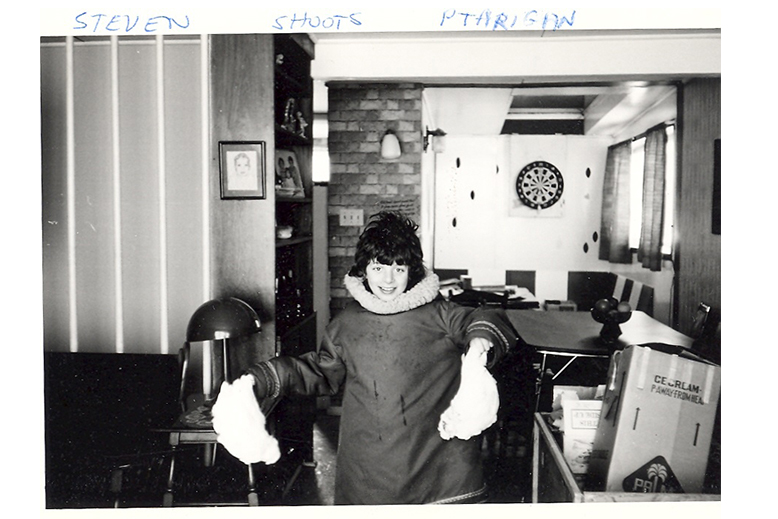 Steven’s love of country food has been fed by his work in the north. His day job brings him in close contact with those who have persisted in the harsh landscape of the north and who have survived an appalling history of colonial abuse. Steven notes that aboriginal culture “…is a culture of sharing for both need and survival…everything I get has been gifted by people that I know”. In 2007, in a discussion with Slow Food Edmonton, the idea of Northern Food Nights was conceived. It would take traditional northern proteins and prepare them in extraordinary ways. Hosted mainly at his Edmonton home, Steven and a selection of renowned chefs including Alexei Boldireff, Paul Finkelstein, and Louis Charest, have reimagined Canadian cuisine by honouring the deep and complex history of the Aboriginal relationship to the land. As a result of this venture some of the most fascinating and forward thinking Canadian dishes have been passed across his table: polar bear donair, walrus masala, Tuktoyaktuk smoked meat sandwiches (smoked whale and musk ox meat on bannock), and narwhal three-ways. Steven has introduced these dishes at Rideau Hall, serving heads of state and was featured at the Arctic Forage Dinner at James Beard House in New York. But the most coveted seat for anyone who has even heard a whiff of what this man has done for country food is the one at a table in his Edmonton home. The Northern Food Night is a singular annual event where invitees test their fortitude against never-before eaten dishes and not small amounts of alcohol.

At the heart of this endeavour is food advocacy and the result of Northern Food Nights has held up country food as a central theme in conversations about food security in the north and the preservation of heritage and tradition. “Not enough young people are going out on to the land…low grade food is being made readily available. Simply put, there is a disconnect between traditional food sources and the current method of food preservation”, says Steven. “We are concerned that the younger generation will not take advantage of the bounty and make the same mistake that early immigrants made which was to think about food in a European way…we promote a connection of old and new – a way to bring youth and elders together. Food is a source of social interaction and the most important exchanges happen over food”. Food security in the north is a real concern. Every month a new story pops up about soaring northern food prices, poor water supply and increased access to unhealthy or unfamiliar foods. Encouraging a reconnection with the old ways through a focus on tradition and history in a way that is exciting and new can bring long lost Canadian cuisine back into the mainstream conversation about our food identity. The Northern Food Movement can be used as a means to reintroduce the value of culture and heritage to northern youth as a way to aid in the processes of reconciliation and in recovering an erased heritage. Steven expanded on this saying “Many youth are loosing their familial connection to the old ways and a connection to their food. There is a whole older generation of people who have who have memories of old food to share. There is a tremendous opportunity for information transfer through food…we now have opportunities to support them in going out to hunt and harvest the bounty but also to introduce modern methods of preparing such food.”

One of the most wonderful things about the northern food movement is that it is at little risk of cultural appropriation. Northern proteins are immensely hard to come by and a lack of viable transit routes renders it nearly impossible to export south. If country food is going to be eaten regularly it is going to be by those who go out onto the land to harvest it. It will stay within the culture and be used as a tool or means to preserve an endangered way of life. We can hold up country food as a Canadian cuisine, feature it at exclusive events and display it for visiting dignitaries as a deeply truthful national cuisine but we southerners get to watch from afar as it evolves and develops. We will never see polar bear donair on a menu. And nor should we – this is not for us. This is one thing we have no matter how unbelievably attractive this might be to our current culture of food adventurism it simply isn’t and wont be available in quantity and quality that we desire. Northern food is a protected cuisine by its very nature and as such hopefully it will remain that way

Steven Cooper will be a speaker at this year’s “Our Home and Native Land: Celebrating Canadian Gastronomy”  Terroir Symposium in Toronto on May 29 . Tickets and full program available at http://www.terroirsymposium.com

On August 20, 2019, Ocean Wise and Eagle Wing Whale and Wildlife Watching Tours teamed up to present the first in a series of speaker events in ...
Read More
“While it seems as if a new celebrity chef is born every minute, farmers—those dedicated, fervent, innovative individuals—remain largely ...
Read More
Everybody gets by with a little help from their friends, including – maybe even especially – farmers and food producers who are trying to ...
Read More
It’s the middle of February and Gabe Epstein has a large basket of home-grown vegetables on his kitchen table. While the potatoes and garlic are ...
Read More
Do you find that you spend the entire week looking forward to the weekend, promising yourself you’re going to do something fun….only to find that ...
Read More
The Farms That Feed Us. How much does the average consumer really know about where their food comes from? ...
Read More