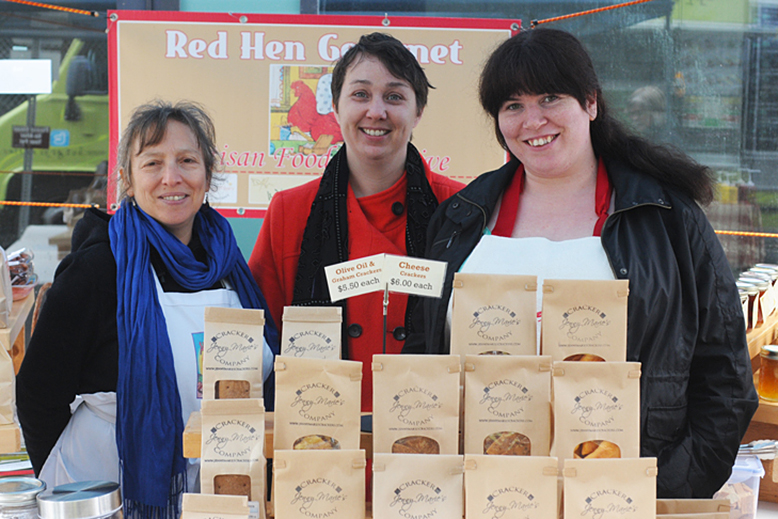 VANCOUVER ISLAND, BC  Three heads are better than one. Six hands are better than two. Or, as my Scottish mother-in-law would say: “Mony a mickle mak’s a muckle!” You get the idea. When women put their heads and hands together, things get done. Three enterprising Victoria women in particular, recently came to the conclusion that life would be much easier and a whole lot more fun if they worked together to develop their growing food businesses. They realized that the old adage about strength in numbers holds a bit of truth, and, wanting to maximize their individual potentials, they teamed up. Every team needs a name, so, from out of the blue the colourful title of Red Hen Gourmet Artisan Food Collective was hatched.

A graphic designer, a teacher and a phlebotomist simultaneously decided to ditch their conventional careers in order to capitalize on their unique culinary specialties. Jennifer Payne, Jessica Duncan, and Tanya Burger tentatively took their wares to the corner of Menzies and Superior where they soon became regular (now veteran) vendors at the James Bay Community Market. Working side-by-side every Saturday, the three women developed a strong friendship that eventually led to the idea of forming a collective. Wednesdays the trio can be found at the Victoria Public Market behind the Hudson building

For Tanya, of Whimsical Preserves, it was all about family. Her mother was a Jill of all trades, and a complete master of her kitchen. She passed on her passion of making wholesome food from scratch to her daughter. When Tanya’s second child was born, she realized it was time to transfer her chemistry skills from the lab to her home where she could still earn a wage while staying home to raise her children. It wasn’t a tough decision to turn her inherited talents into her new source of income.

Jessica created Singing Bowl Granola on a whim. Having just moved to Victoria knowing full-well that her Ontario teacher’s credential was not recognized in BC, she was looking for a way to make ends meet. Granola seemed as a good a new career choice as any considering this is the West Coast , and she had a long, passionate relationship with health food. It also allowed her to be available whenever her young children and aging parents needed her.

Acutely aware that sitting in front of a computer all day was killing her spirit, Jenny of Jenny Marie’s Cracker Company was dying to spend more time in the kitchen where she could express her creativity in a more palatable fashion. Having spent much of her childhood in her grandmother’s Newfoundland kitchen, baking was a source of comfort and happiness for Jenny. She was keen to get back to her roots. Jenny started with cupcakes, then muffins, then, one day, while experimenting with recipes, she discovered the beauty of the artisan cracker. Though not overly prone to making final decisions, Jenny bravely took the plunge and committed to focusing on creating a line of handmade crackers for the public’s pleasure. Not wanting to disappoint any potential gluten-free customers, Jenny also created a line of energy balls which are hugely popular with all her customers.

Farmers’ markets are a great place for new producers to meet each other, build clientele and test the marketing waters. Many food producers cut their teeth at the markets, before eventually venturing forth into the world of retail and distribution. The step from setting up a tent every Saturday and hoping it doesn’t rain, to supplying shops with your product is huge. It is not merely a leap of faith, but also an acrobatic feat, jumping through the myriad hoops thrown at you by the powers-that-be, juggling production and deliveries, and riding the roller coaster of learning curves.

Wanting to expand their fledgling businesses, but feeling daunted by the logistics involved, Tanya, Jessica and Jenny thought it might not be a bad idea to work as a team in order to support each other as they faced the inevitable hurdles. What they discovered was that it was, in fact, a great idea to form The Red Hen Gourmet Artisan Food Collective. Suddenly, the self-employment load became lighter, the ideas started to flow and confidence grew.

Still selling at farmers’ markets, the Red Hen Gourmet gals can now set up tables at three times as many markets, selling each other’s products under one tent. They share a rented kitchen, a storage space, and supplies. They take it in turn to approach new shops to carry their products or apply to new markets. Most of all, they share moral support and friendship – encouraging, inspiring and cheering each other on. In the brief time they have worked as a collective, these three entrepreneurs have seen their respective businesses grow at a rapid rate, a trend that they hope to see continue as they spread their wings and share their wares with the discerning public.

The article on L’Apéro in the May|June issue should have stated Chef Andrea Maiolo staged at The Courtney Room and Zambri’s and that he held the ...
Read More
May|June issue on the stands. Read ...
Read More
Who doesn’t like toast? It’s super easy to make and you can top it with just about anything. Toast smothered in peanut butter and jelly, ...
Read More