Summer and beer. Goes together like burgers and fries, chicken and corn on the cob, kabobs and potato salad. Come to think of it – those are all perfect food pairings FOR summer beers. Meant to be refreshing, these seasonal brews are generally lower in alcohol, lighter in body, hue and contemplation, and enjoyed quite chilled (mind you any beer that only tastes good ice cold is certainly not quality-driven).

So what qualifies as “summer beer” then?  It’s open to interpretation, as the 40+ seasonal releases + summery favourites my EAT panel tasted for this article illustrate. There were some distinct stylistic groups however:

Fruit beers of every flavour imaginable are lining the shelves at this time of year, competing with coolers for your quenching cash. These can be sweet or dry; just like there is no set fruit, there is no set style. The best will utilize actual fruit in the fermentation, but most use an extract, syrup or processed flavour. The beer itself is usually quite mild, without overriding hop or malt character, so the fruit flavour can shine. Though it may seem a bit gimmicky (and some labels and names can play that up), fruits have been added to beer for centuries, especially with Belgian lambic styles. Cherry and raspberry are historically the most common addition to this style of beer.

Witbier (aka Wheat Beer, White Beer, Witbieren, Weissbier) fits the bill, in a much less-overt way, leading numerous local brewers to make this renaissance style. Mde with a high proportion of wheat, this style of light, bright, flavourful, spiced sunshine in a glass has been around for over 400 years. The name Witbier refers to the paler hue (‘wit’ = ‘white’) – most beers were dark brown when these were introduced. This is still a distinguishing characteristic, with most Witbier being a very pale, bright lemon in colour. Belgian style Witbeir are usually cloudy, unfiltered and bottle conditioned. Like non-interventionist winemakers, some brewers believe the cloudiness adds texture and depth to the final product. Malted barley and/or unmalted wheat (sometimes oats) are used as the base mash, and warming spices and herbs are added to balance the strong wheat flavours. Coriander and citrus are the usual suspects, and brewers add in their own ‘secret blend’ of distinction. Hops are used sparingly, and tend to be varieties that complement the spices and herbs, like the spicy Saaz hops.  Any sediment in the bottle should be swirled and poured into the glass to enjoy the full experience. Purists shun the lemon wedge often offered up to accompany.

Hefeweizen is kind of like a south German cousin of Weissbier, typically from 50% (or more) wheat as the base. The “Hefe” prefix means “with yeast”, providing the beer’s unfiltered and cloudy appearance. Common notes include banana, cloves, spice and apple, and Hefs are often dry and tart, with mild-moderate hops. This style, too, can be served with a lemon wedge, but as with witbiers, it’s not traditional.

Saisons appear to be the latest on-trend beers that local brewers are trying. This style of dry, sometimes slightly sour beers are refreshing, though higher in alcohol (5-8%). These Belgian beers were traditionally brewed in the cold of winter, then stored for the seasonal farm workers (les saisonniers) to enjoy in the warm summer months. Hence, they are often referred to as farmhouse ales (Driftwood Brewery’s Farmhouse Saison was an early excellent standout), complex and often meaty, with spicy and earthy notes and a good heft of bitterness. These are great for pairing with protein – they’ll stand up to the grilled pork chop.

As mentioned above, my panel tracked down a few dozen local beers (and a handful of outsiders), swirled, sniffed and swigged the suds to come up with this shortlist for your summer enjoyment – and award a few impromptu medals along the way.

NOTE – I’ve picked only one beer from each brewery – either a limited summertime release, or a year-round offering that is particularly welcome during the sunny months. There are other fantastic Wits, Hefes, Fruits and more out there, so this is not, by any means, a be-all guide. And on that note, I certainly am no beer expert, though I drink my fair share – especially after a full day of tasting wine.

Moon Under Water Berliner Heist
Victoria
3.7% draught only
*Most Interactive Beer
This obscure German style has been modified by the fearless team at MUW, jacked up with extra wheat and lemon rind and then open-fermented with a Bavarian weizen yeast. It’s about as tart and lean as you can go, though a comforting spiced bananas aroma is appealing. But the fun part comes as you get to add in your own housemade syrups – either the shockingly green herbal Woodruff or seeded Mixed Berry, each adding its own spin (and hue) to the brew.

Hoyne Summer Haze Honey Hefe
Victoria
650ml  5.1%
Honey is upfront and present, on the earthy side, with a faint fruit perfume and soft cereal notes. Mild hoppy grassiness closes out this smooth sipper.

Lighthouse 3 Weeds
Victoria
650ml  7.5%
*Most Unintentionally Melancholy Label
I suppose mermaids hang out in the slimy weeds in the murky depths of the sea – but I prefer the times when they’re out straddling dolphins and singing with guppies. Though the label might make you a bit weepy – I mean weedy – the beer itself will make you burp rainbows. Lovely Belgian style wit, with coriander, ginger, oats and orange oil. Sweet spice on the finish – light and citris fresh throughout. Lighthouse continues to strengthen.

Tofino Brewing Company Reign In Blonde
Tofino
650ml  5.5%
*Best Beer to Chill on a Beach With
This Blonde ale is exactly as it should be: crisp, clean, light, earthy, biscuit, citrus, REFRESHING, balanced. Great sweet (honey) & savoury (biscuit) thing going on – finishing crisp, clean and non-contemplative. Summertime, and the livin’ is easy…

Vancouver Island Brewery Flying Tanker White IPA
Victoria
650ml  6.8%
*Proudest Local Label of the Summer
This Belgian style IPA stood out for me not just because of the super striking label (who doesn’t love the world’s largest fire fighting water bombers, located on Vancouver Island’s Sproat Lake?), but for the fact that is a White IPA – a term I haven’t heard before. Part of their “Brewers Batch” series, this twist on a traditional IPA has VIB infusing Weizen yeast and wheat malt into the mix, resulting in a very smooth, strong, grapefruit kissed, earthen hops, vanilla spiced ale. An interesting mash up – kudos for creativity (and my favourite label of the lineup).

Driftwood Naughty Hildegard ESB
Victoria
650ml  6.5%
*Best Way to Honour a 12th Century Nun. Or Anyone Else Ballsy For That Matter.
And, the boys at Driftwood have done it again. Still. As legend has it, Hildegard Von Bingen, a 12th century Benedictine nun, allegedly was the first to record the use of hops as an ingredient in beer. Sounds like my kind of lady, and the team at Driftwood agrees, honouring her spirit by naming this Extra Special Bitter after her. Happily hoppy, with earthy, herbal and biscuity complexity, caramel notes and grapefruit bitterness on the lengthy finish. Adventurous and unique. Hildegard would approve.

Phillips Brewing Company Bottle Rocket ISA
Victoria
355ml can  5%
*Most Picnic Friendly
Light and hoppy, crisp and clean, quickly chillable, portable, colourful, low alcohol. It’s summer? What else do you need? This India Session Ale (ISA) is IPA’s little cousin – hoppity, but much more of a lightweight. Phillips has a faint honey, orange kiss and a touch of piney bitterness on the finish.

This strong, med-full bodied maibock has a strong, surprising cereal hoppiness, well balanced with the assertive classic German malts. Very drinkable (a bit too much so), so pair with protein – steak/beef or bison burgers would do.

Dead Frog The Bold Belgian Pale Ale
Aldergrove
341ml  5%
*Most Roadkill-Like Label That Thankfully Does Not Taste Like Contents Within
Was pleasantly surprised by this mash up of a Belgian and North American Pale Ale. The result carries the spicy coffee notes of the former and the sweet malts of the latter. A perfect partner for your steak sandwich (do not advise pairing with frog legs).

Okanagan Spring Brewery Apricot Summer Weizen
341ml  5%
*Best Beer for Someone Who Really Wanted to Drink Orange Crush Instead
Wow – fruity! Sweet! Confected apricot candy. I recommend making the APRICOT stand out in giant letters on the label, because it could easily be missed and – wow – would you be in for a surprise (like we were).

Parallel 49 Brewing Company Banana Hammock Summer Hefe
Vancouver
650ml  6%
*Hardest Beer Name To Erase From My Memory
In the dead of winter, I will remember this beer’s name, and smile. That said, I bet it scares a few people off (Speedo imagery aside) because some consumers will think this beer actually contains mashed bananas (it doesn’t). This beer is worthy of remembering, name aside. Unfiltered and wonderfully hazy, with toasted clove, banana, spiced nuts and bright orange peel. Not overly sweet or alcoholic – just nicely balance, like a swing in a hammock.

Fernie Brewing Company What the Huck Huckleberry Wheat Ale
Fernie
650ml  5%
I love the subtlety in this beer – from the pinkish salmon hue to the gentle tart berry fruit. This is a brilliant beer to introduce people that are scared of drinking fruit beers to. Smooth with a little hop spice and dry, fruity finish.

Tree Brewing Yellow Moon Pineapple Hefeweizen
Kelowna
330ml  5%
*Best to Buy When You Can’t Afford a Hawaiian Holiday
Opposite to Fernie Brewing’s What The Huck, this is a FRUIT beer for people that want FRUIT. Burnished pineapple, candied banana, citrus, spice – all crisp and clean and sunshine bright. Having pu-pus on the lanai while strumming on the ukelele (or wishing you were)? Pop a few of these. Aloha!

Tin Whistle Peach Cream Ale
Penticton
650ml  5%
*Best For Curing Okanagan Homesickness
Firmly and proudly from the fruit basket of BC, I could smell this beer from across the room when it was cracked. Fresh apricots, peaches, canned mandarins in syrup poured over a cereal, finishing with peach fuzz bitterness and creamy malt. Fuller bodied. I’d serve right chilled as a dessert.

And now, a few words on a few selections from AFAR that caught our eye

Creemore Springs Kellerbier
Toronto, ON
341ml  5%
In case you didn’t know Kellerbier, it is an “unfiltered medieval German lager-style” and Creemore Springs’ has revived it with this hefty tangerine, baked bread, pepper spice, textured beer. 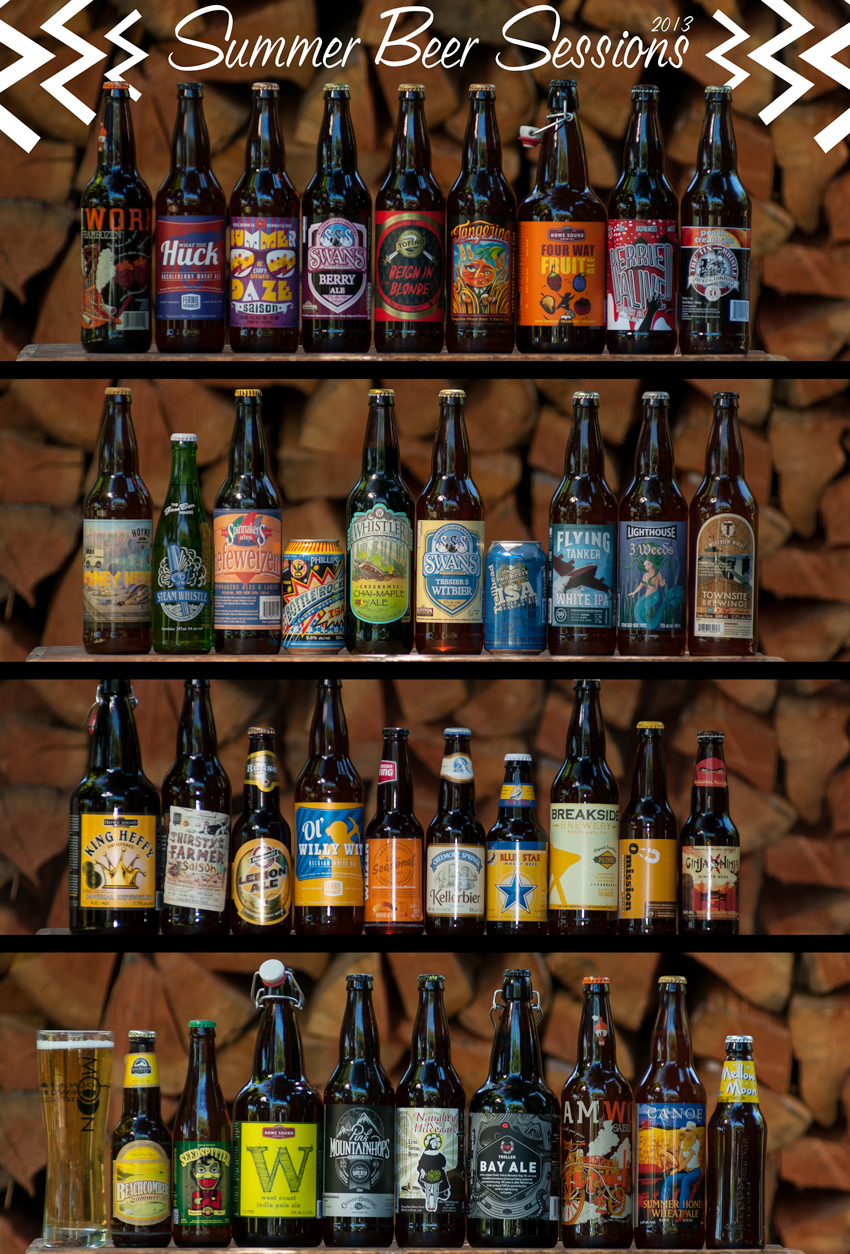 Save this picture, print it and cross off all the great beers you try over the summer!

Did you know that Victoria is one of the Canada’s foremost producers of professional cyclists? You’ve probably heard of Olympic gold medalist and ...
Read More