When the temperature (finally) lands firmly in the legal teens, there’s no better way to cool off than with a cold beer. A match made in movies, our sun-starved pale skin seems fate-destined for pale ale. Easy-drinking, ubiquitous and popular, Pale Ale has become somewhat seasonless – readally available on the shelves year round. So for my seasonal round-up of Victoria beer, my DRINK-ing panel looked to specialty summer-specific brews.

What makes a good summer beer? According to EAT’s beer columnist Adem Tepedelen, it’s light, refreshing, approachable and thirst quenching. It should be sunshine patio-friendly, able to stand without food, lower in alcohol and easily quaffable (no heady fireside contemplation allowed). An A+ example should have enough complexity to be tasty while sliding up the temperature scale. True – no one likes warm beer. But if the brew is only drinkable ice cold, you have a problem.

Witbier (aka Wheat Beer, White Beer, Witbieren,) fits the criteria nicely, and numerous local brewers have tried their hand at this renaissance style. Well-made, it is light, bright, flavourful, spiced sunshine in a glass. Though a foreign name to many, this style of beer has been around for over 400 years. They were originally called Witbiers because they were much paler than most beers at the time – commonly a dark brown hue. As such, these wheat beers were called ‘wit’, meaning ‘white’. This is still a distinguishing characteristic today, with most Witbier being a very pale, bright lemon in colour. Belgian style Witbeir are usually cloudy, unfiltered and bottle conditioned. Like non-interventionist winemakers, some brewers believe the cloudiness adds texture and depth to the final product. Malted barley and/or unmalted wheat (sometimes oats) are used as the base mash, and warming spices and herbs are added to balance the strong wheat flavours. Coriander and citrus are the usual suspects, and brewers add in their own ‘secret blend’ of distinction. Hops are used sparingly, and tend to be varieties that complement the spices and herbs, like the spicy Saaz hops.  Any sediment in the bottle should be swirled and poured into the glass to enjoy the full experience.

There is a popular American version of the wheat beer, slightly more golden in colour and usually filtered, so there is no haziness in the final pour. It also lacks the spices of the Belgian or German styled Witbier, instead being served with a lemon wedge. The lemon affect is similar to the European spices, tempering the wheat edge. The lemon has more recently been accepted locally to accompany all styles of Witbier, North American styled or not (though beer purists cough and choke at the thought).

Though a highly popular (dare I say ‘trendy’?) beer now, the centuries-old Witbier style brings a sophistication to summer that delights both serious beer geeks and bar goers. Complex and mysterious thanks to the coriander and clove kissed cloudiness, it is still highly drinkable and a stellar refresher.

The DRINK-ing panel sipped through a lineup of local craft beer on a sunny afternoon. We each had different rankings for the #1,2 and 3 spaces, but when the count was tallied, here were the top trio: 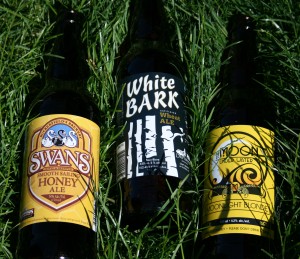 This traditional Belgian-style Witbier is brewed with the addition of freshly ground coriander and Curacao orange peel. Hops are outshone by the wonderful floral aromas that dominate the nose of this dry and quaffable beer. Notes of bittersweet orange, cinnamon spice linger in this complex, refreshing beer. Excellent quality.

Burnished amber in the glass, with dried apricot and savoury elements. The addition of local Fireweed Honey amps it up a bit, and while refreshing, the oomph enables food pairings galore.

Other Victorian summer beers we tried (and you should too):

September|October issue on the stands. Read ...
Read More
August 22, 2022 — Staff, volunteers, and board members from Victoria’s Belfry Theatre have raided some of the best local wine cellars to find ...
Read More
We have a winner! Shannon Bowles! Shannon has won tickets to see Five Alarm Funk presented by Atomique Productions on January 30th at Sugar ...
Read More