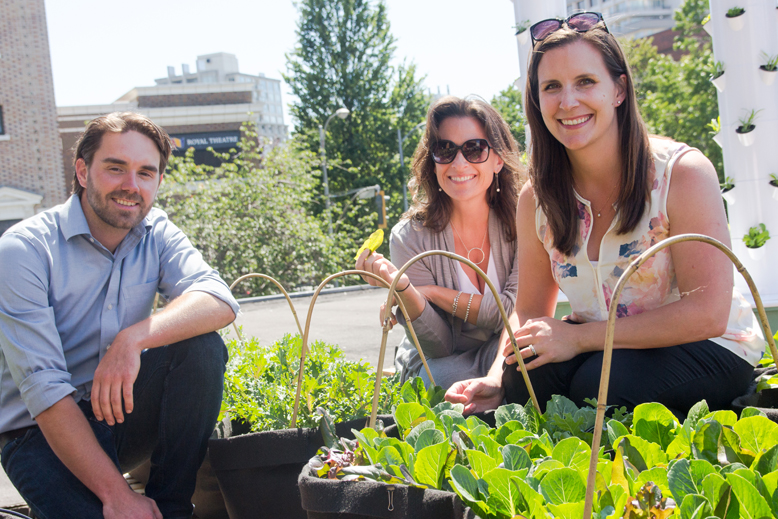 It’s been 10 years since the Vancouver Aquarium launched its Ocean Wise campaign, a program to help consumers identify sustainable sources of seafood, and the retailers and restaurants that sell it.

Chef Kunal Ghose was one of the early adopters, opening the legendary Red Fish, Blue Fish and serving sustainable seafood from a   repurposed shipping container along the city’s waterfront. Today, Ghose has Fishhook, another sustainable seafood spot downtown in the heart of the Blanshard corridor dining district, and he has plenty of company in the green dining scene.

“Red Fish, Blue Fish was the first 100-percent Ocean Wise restaurant on Vancouver Island,” he says. “Now, you stand out if you’re not doing these things—it really showcases what the city has become.” What Victoria has become is a city with a reputation for being very green, a place with a big focus on local, organic and sustainable practices.

Sustainable is the big buzzword in the restaurant world, especially here on the West Coast where some of the earliest proponents of Slow Food, Ocean Wise and farm-to-table philosophies cut their chops. It’s hard to find a chef who doesn’t at least try to incorporate what’s fresh, local and organic onto the menu, and many of the small chef-run spots in the downtown core really walk the sustainable talk.

There’s even a new initiative called FED (the Food Eco District), which jointly promotes a handful of like-minded small restaurants, bakeries and coffee shops taking steps to green their businesses in the downtown core. Jill Doucette of Synergy Enterprises, a greennbusiness consulting company, helped create the carbon-neutral dining zone in the Blanshard Corridor.

“On a square-foot basis, hospitality businesses are huge when it comes to energy consumption,” says Doucette, author of Greening your Hospitality Business, part of Self-Counsel Press’s Green Series. She advocates a variety of green restaurant practices, from reducing carbon emissions by conserving water and energy consumption, to recycling and “shortening the supply chain by supporting a more local model.”

In conjunction with partners like the Downtown Victoria Business Association and Fort Properties Ltd., the FED project has built planter boxes to grow food and created Fort Common, a communal patio in a former parking lot beside the entrance to Be Love restaurant. Future projects include recycling spent cooking oil and expanded opportunities for urban agriculture.

“We get our ling cod from the most sustainable fishery on the island,” says Josh Carlsen, “and we compost, for sure.”

Chef Peter Zambri and his sister Jo have been running their eponymous restaurant, Zambri’s, with sustainability in mind since the beginning. But today they are among the city’s growing cadre of carbon-neutral establishments.

“Local and sustainable have been part of our philosophy forever, it’s just one of the things we do,” says Jo Zambri. “I remember being very conscious of the Slow Food movement when we opened in 1999, and the whole world seems to have caught up with that core philosophy.”

Beyond composting and energy audits, Zambri says they do “small things” to stay green—staff walking or biking to work, saving leftover water from carafes to water plants and buying from several local growers, including Saanich Organics and Mason Street City Farm, an innovative, quarter acre urban community farm in the North Park neighbourhood

“Farmers and local growers are becoming closer to us geographically,” she says. “Mason Street Farm is literally three blocks from here, and they walk the vegetables to us.”

Other companies that are part of the sustainable downtown food system include ReFUSE, a recycler that picks up restaurant food scraps and turns them into composted reSoil. ReFUSE works with progressive members of the Island Chef Collaborative (ICC) to close the loop from farm to fork, and support their efforts to feed Vancouver Island with organic, locally-farmed food.

“The message hasn’t reached everyone, but there’s an awareness here about sustainable  living,” says Ghose. “Our clients make choices, they do what makes them feel good. I’m trying to do my part, too.”

The Fort Common District is a 36,000 sq ft adaptive reuse project featuring an office building and a series of urban street front retail bays surrounding a revitalized carriage yard, The Fort Common. The Fort Common was designed to serve as a community venue for festivals, events and restaurant seating. In the summer of 2014 it served as a venue for community fundraisers, political campaign launches, and major festivals. It is also the location for the local Food Eco District community gardens, which provide locally grown food for use by neighbouring restaurants. In the future, the courtyard may serve as the location of permanent licensed restaurant patio seating, film festivals, outdoor yoga classes, and other community oriented activities.  Stay tuned…

We apologize for any inconvenience this may have caused. This article was first published in the Nov/Dec issue.

The article on L’Apéro in the May|June issue should have stated Chef Andrea Maiolo staged at The Courtney Room and Zambri’s and that he held the ...
Read More
May|June issue on the stands. Read ...
Read More
Written by Christabel Padmore • 4 cups Yam, peeled and cut into ¼” cubes • 1 medium onion, chopped • 2 cloves of garlic, minced • 1 ...
Read More