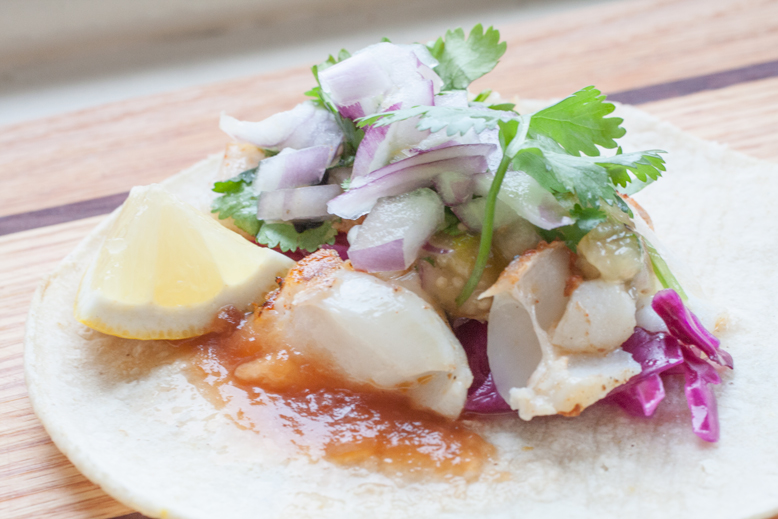 “Is your cod fresh, brother?” The filets of grey cod glowed a translucent, fleshy white against the white butcher paper. The bearded wild man at the Cowichan Bay Seafood stall proffered one over the counter and we inhaled the effervescent scent of salt, water, and wind. My friend Shane grinned. “Still smells like the sea.”

Even living in a coastal city ensconced on an island, we can find ourselves forgetting that the ocean isn’t simply a vague blue vastness offering unlimited protein. The story of the Atlantic cod fishery is a powerful cautionary tale. Atlantic cod has been fished off the Eastern coast of North America since the 17th century, but commercial overfishing dwindled the population to dangerous levels in the early nineties. In 1992 the Canadian government declared a moratorium on Atlantic cod fishing, the largest industrial closure in Canadian history. Since then, there have been conflicting studies on the return of the Atlantic cod population, and fishing quotas have remained low.

Thankfully, our side of the country offers its own signature cod, similar to the Atlantic. Pacific cod, also known as grey cod, has a slightly higher moisture content, making it a little less firm. Otherwise, it’s nearly indistinguishable, making it perfect for supplying Victoria’s myriad fish and chip shops. The commercial cod fishing industry has largely learned its lesson from the Atlantic cod collapse and Pacific cod is much more sustainably fished.

Cod by nature is low in fat and is moist and flaky when cooked. Because its flavour is pretty mild, it combines well with tons of other ingredients. The return of Victoria’s seasonal hefeweizens had us fired up for some summer flavours, so we decided to make fish tacos. We sauntered down to the Mexican House of Spice for an armload of tomatillos and fresh corn tortillas and then strolled through Chinatown for red onion, cilantro, red cabbage, and lemons. All set for a (slightly premature) summertime banquet! 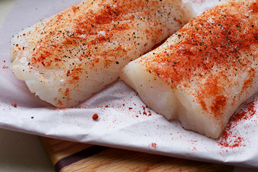 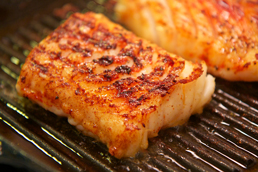 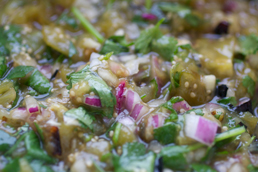 The tomatillo is actually closer to the gooseberry than the tomato. They grow wrapped in a papery shell and have a sticky coating that should be washed off before eating. Salsas made with tomatillos are often milder and have a distinctly tangy and zesty flavour. We halved them and put them cut side down in our cast iron pan to broil in the oven for 5-7 minutes. This softens them, releases some of their liquid and blackens the skin for a nice look.

In the meantime, we chopped up the red cabbage and put it in a bowl with some salt, letting it sit for a while to remove some of the moisture. Once the bowl has some liquid in it, you can drain the cabbage and rinse it off before mixing it with some vinegar and salt. By agitating the mix with your hands, you can help break down the cabbage and make it easier to stuff into an overfilled taco. 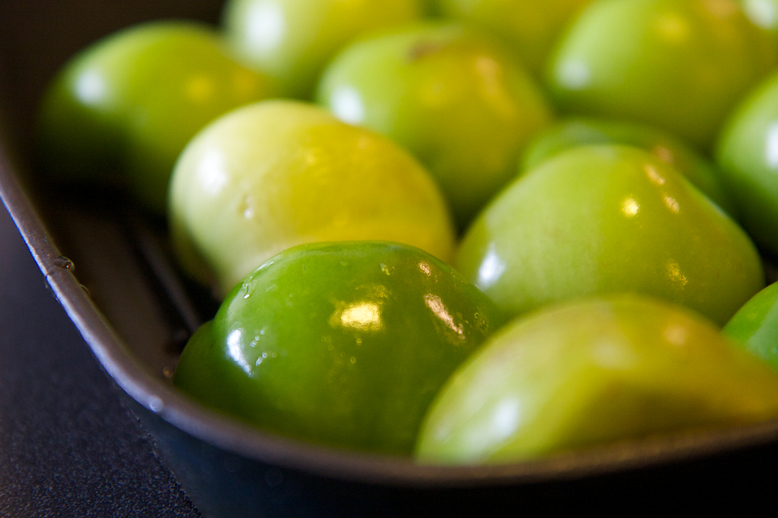 After broiling, allow the tomatillos to cool slightly before chopping them into chunks. You could use a food processor but I prefer a little chunkier salsa. In went our diced red onion, minced garlic, cilantro, lemon juice, and a little honey or sugar to counteract the slight tomatillo bitterness.

We cut our cod fillet into smaller pieces and liberally sprinkled them with paprika, salt and pepper. After rinsing off our grill pan, we added some olive oil and heated it to medium-high before gently adding our fillets. It only takes 2-3 minutes on each side to sear cod; as you watch, it will turn opaque and separate into flakes. Don’t forget that the residual heat will continue cooking the fish even after you remove it from the pan, so it’s okay to take them out slightly early. The paprika forms a gorgeous orangey-red crust on the outside as well.

While you can reheat them in an oven, I prefer to toast my tortillas by throwing them into a hot, dry skillet for about 20 seconds on each side until they form brown spots. Serve them up DIY style with an arsenal of napkins and hot sauce to taste. ¡Buen provecho!

November | December issue on the stands. Read ...
Read More
For the ninth year in a row Rancho Vignola is setting up its Vancouver Island Harvest Sale here at the Mary Winspear Center in Sidney. Many of ...
Read More
Season’s Greetings EAT readers! We at EAT are looking forward to all the wonderful seasonal baking on offer around the city. One of the great joys ...
Read More
Masterclass Candied Citrus Holiday ...
Read More
Earlier this week, Canadian cooking icon Vikram Vij made a stop in Victoria as part of a tour to launch his new line of frozen foods. At a media ...
Read More