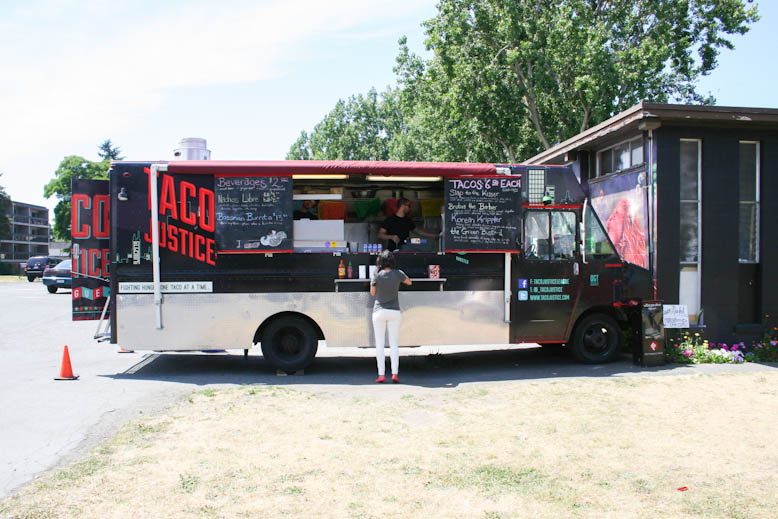 Here in Victoria, BC, justice is being meted out daily, one taco at a time, at the corner of Pandora and Cook from the window of a large black truck.  Walking up to the high window and asking for a taco, feels to me like approaching the bench and appealing to the judge.  Instead of gavel strikes, though, delicious tacos rain down.

I spent some time talking to Temperance, the visionary behind the Taco Justice truck.  The fact that a man named Temperance is running a truck named Justice pleases me.  It is as though I have stumbled into a culinary Pantheon and I am now wandering, bedazzled, among salsa soaked marble statues.  Temperance lays down Taco Justice’s philosophy for me like this: 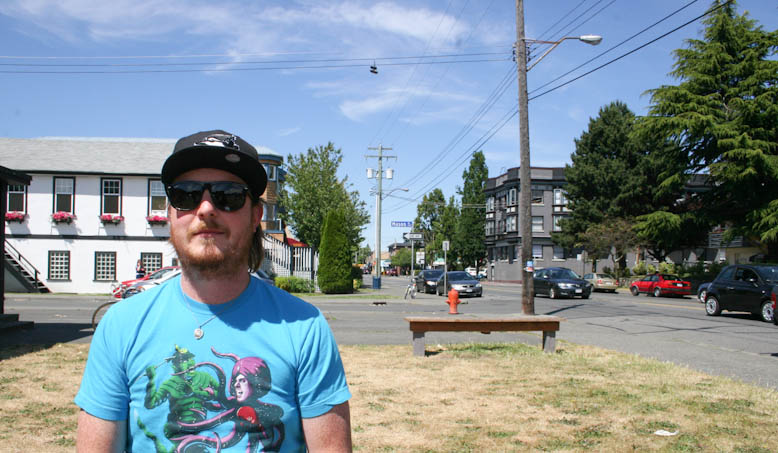 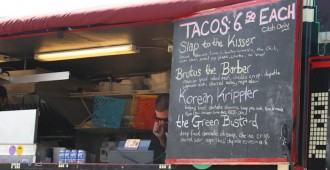 All his life, particularly in Calgary, he paid his dues as a line cook, or as a chef, sticking to the traditional ways that things ought to be produced.  When it finally came time for him to launch Taco Justice onto the streets, he did so with two premises:

#1: That the tacos should not necessarily be traditional, but should mix things up and experiment.  I have tried all four tacos currently on offer and I agree that the experimentation angle is great.  There is absolutely no reason why tacos have to remain rooted to Mexican flavours.  Don’t get me wrong, I would marry a plate of Mexican tacos if one came to life and asked me to dance, but until that happens I’m totally down with the Bulgogi Beef taco at Taco Justice.  I’m also down with the deep-fried avocado taco (a.k.a., the Green Bastard).  Temperance describes this one as being the vegetarian equivalent of fried butter.  It pretty much has to be tasted to be believed. #2: Taco Justice is a truck made by the people and for the people.  As opposed to working downtown where the tourists roll off the plump cruise ships, Temperance wants this truck to be a treat for local Victorians.  People line up on the grass beside Wellburns every afternoon and the feeling is that of a social occasion.  Strangers chat and friends linger in the sun.  Temperance tells me to remind people that the truck has paddles available and that people can play pickleball while they are waiting, whatever the hell pickleball is.

What is next for Taco Justice?  The truck is mobile and will be appearing at all sorts of local festivals this summer.  Temperance tells me he has visions of a fleet of taco trucks; a justice league, if you will.  I ask if each truck will have special powers and he tells me they will.  I pray there is no Wonder Twin truck.  I cannot pretend to know the mind of the ancient Greeks, but I think Socrates would approve of these tacos being sold in the streets of the Republic.  I think he would approve of the philosopher king wiping the salsa from his chin with a wide grin on his face.

“The great peasant staple spans the globe.”   “Love” a lentil dish daily for your chance to win a trip to beautiful ...
Read More