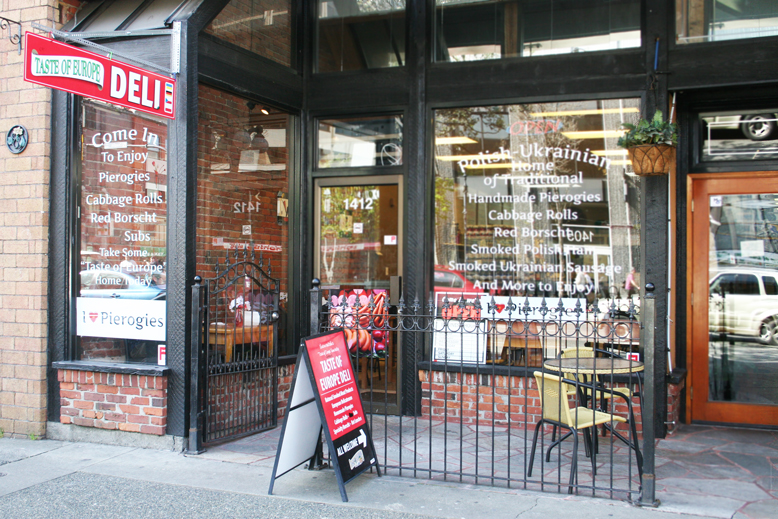 Chris Zmuda comes out from the back of the store with two perogies.  One he has made himself from scratch, carefully closing and decorating it with the tines of a fork, and the other is clearly made by a machine at a factory.  “You can see the difference,” he tells me.  The difference is in the taste, too.  As opposed to the bland, overly doughy experience of a perogi one might buy frozen from a bag at the supermarket, Zmuda’s perogies are delicate and flavourful.  Served with caramelized onions and a dollop of sour cream (in the traditional style), they are an extremely satisfying meal. 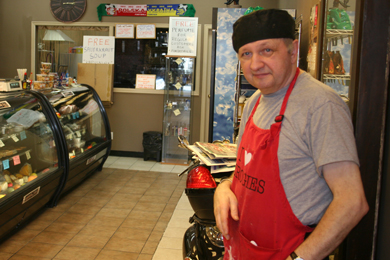 Food explanations are a typical and expected aspect of Chris’s “Taste of Europe” Deli Store.  Zmuda is not only the cook here, he also is acting as an ambassador for Polish cuisine; describing the secrets of his recipes and their superior quality to anyone who comes through the door.  As someone whose own family came from the Russian Pale a century ago, I take Eastern European food very seriously.  These dishes were a part of my upbringing.  I am scandalized when this food is badly made, and my tongue and belly soar like twin eagles when it is made well.

I am thinking of making this restaurant one of my shrines—that’s my review.

I’ve been twice to eat a combination meal with perogies, a fat and savory cabbage roll, and a sausage served with spicy mustard.  This kind of meal, perfected by peasants and workers at Europe’s edge over generations, is not to be judged by complex layers of flavour, or unusual arrangements of spice.  Rather, there is a simplicity to its presentation that is extremely difficult to replicate.  Like the brush strokes of a Japanese painter, the genius is in the inclusion of only that which is essential and the exclusion of all that which is not.  Any attempt to make a perogi fancy would destroy its beauty. 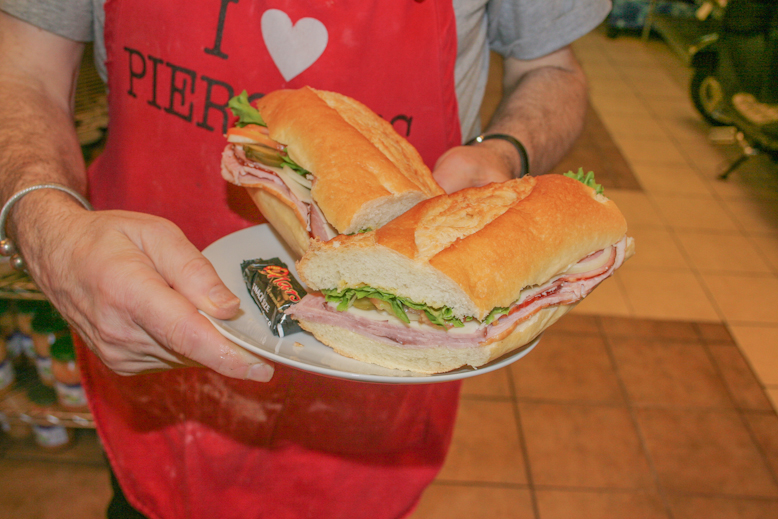 While I was dining today, another customer came in and ordered a Polish Sub.  It was a gargantuan and scrumptious looking affair, crammed with cold cuts and vegetables all contained within a large crusty loaf of bread.  Zmuda , the other customer, and I all discussed the sandwich as it was carried, ceremonially, to the table.  Zmuda is in and out from behind the counter so much that it sometimes feels like we’re in his kitchen at home.

The man who bought the sandwich tells me he is addicted.  I don’t blame him.  While we eat, other people come in and out, buying pickles and sauerkraut and sausages, buying perogies to go.  The people with insider information are already here.  “The mayor came here to eat,” Zmuda says, “I asked a customer to take a picture, but the guy took such a bad shot.  He cut off everybody’s heads!”  I don’t know the mayor, I tell him, but I’m sure he will come back.  Why wouldn’t he?  This deli is marvellous.