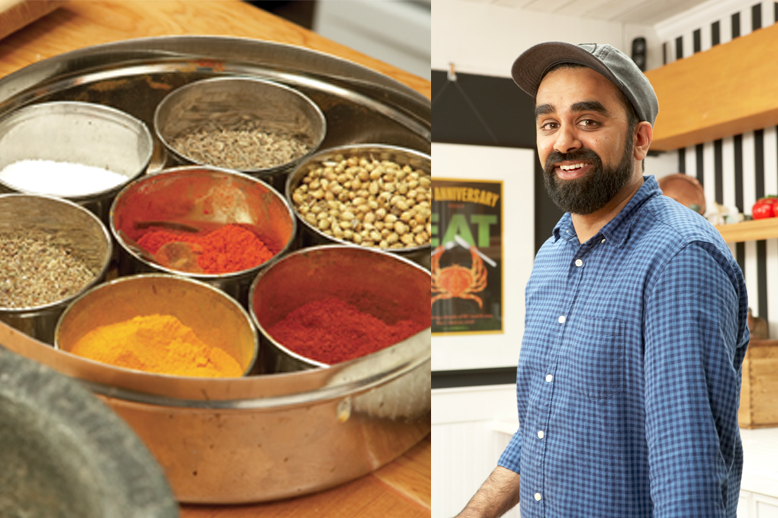 As CBC radio’s national food columnist and co-host of Victoria’s morning program On the Island, Akhtar says “food doesn’t have to be authentic it just has to taste good.”

Last week, I met the Fernwood resident at Part and Parcel to discuss food issues that interest him, culinary trends, and his cooking classes at Cook Culture.

Of Indo-Pakistani descent, Akhtar’s earliest exposure to food was the traditional Pakistani dishes his mother cooked. However, in today’s cuisine there is wider, cross-cultural approach to food that Akhtar finds refreshing. “It’s not even ‘fusion’ anymore” he says. “Restaurants are combining styles [these days].

We pause to examine Part and Parcel’s menu, which is overflowing with culinary elements from Asia (rare albacore tuna), to India (curry lamb ragu) and Italy (risotto and gnocchi). And by golly I suddenly notice that this mish-mash actually works. A culturally unified menu (if it’s done right) is appealing and the combinations interesting. 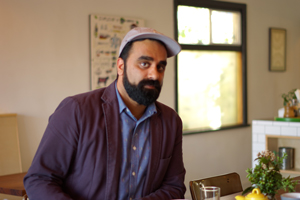 Food, says Akhtar, is an “undercurrent that affects us all.” By incorporating stories from as many angles as possible, Akhtar attempts to connect that undercurrent to a broader demographic. “I want to talk about agriculture and business too; universal food topics” says Akhtar. Generating stories that are “non-exclusive” and shouldn’t be limiting, or designed to appeal to an elite audience, says Akhtar. “Let’s be honest here, we all eat.”

“Stories about McD’s matter, because when one of these massive corporations changes the way they source [and serve] their food, they can change the way food is produced — they drive the market” says Akhtar.

“Certain restaurants don’t get reviewed because they don’t fit into the ‘foodie’ lifestyle” Akhtar says. “Substantial stories are what we need to focus on. There’s nothing wrong with talking about policy issues and business.” “Or McD’s” I chime in. “Exactly” says Akhtar.

We’ve seen a big shift over the last decade or so, from fine dining and white linens to a more relaxed and inexpensive places to eat. Akhtar says “I think we’ll continue to see this exodus from fine dining to more chef-run, less technical [albeit] accomplished, relatable and affordable places to dine.”

“Things like [fermentation] are cyclical. When there is an increased understanding of how things are made people take an interest.” He’s referring in part to the health benefits of eating fermented foods but more so to a growing awareness that fermentation isn’t that peculiar. Gesturing toward my grilled pickled beet and aged cheddar sandwich I see his point. (If only I had a pint of beer to wash it down and a chunk of chocolate, I’d have the entire fermented food pyramid covered).

Not one for endorsing one place over another, Akhtar prefers to share an experience he had on a trip to India — “In recent years my wife and I traveled to the ancient city of Lahore, Pakistan. My uncle took us to the local market stalls and we ate an incredible meal on the street. The dish was a special kind of curry chicken called Desi Karahi. It was a complete food experience; kind of dirty, rough and loud with cars everywhere and roosters in cages. If you ran into Anthony Bourdain, you wouldn’t be surprised.”

While I couldn’t find any footage of Bourdain eating in Lahore, his respect and fondness for eating street food is widely known. “I believe people communicate through street food. What people eat on the streets of Mexico [or India] is the product of many difficult years that have shaped those dishes. Such stories intrigue me” says Bourdain.

“It comes largely from my mother” he says. “Those were the dishes I grew up with. So what I learned was accumulative, over the years.” Out of curiosity, I asked if having a son help out in the kitchen was typical for Indian families. “Well, with all boys my mother didn’t really have a choice!” Akhtar says. “I think if she had daughters, I would have been excused [laughs].”

Though, what seems to have really stuck for Akhtar is the efficiency with which his mother cooked. “Pounding out three hot meals [a day] from scratch with a level of economy; sourcing ingredients, and maintaining an organized kitchen [all while] having a deep understanding of the cuisine, down to the flavours and spices, has been instrumental in my cooking.”

It’s those flavours and spices, one of the unifying elements in Indian cuisine, that Akhtar commented on in the 2013 July/August edition of EAT Magazine. Calling it a delicate balance, spices are “a steady drone, a sustained chord that echoes underneath many Indian dishes. There is a craft to that balance. Some spices together can become dissonant. Others come alive only with a particular partner.”

What’s coming up at Cook Culture for Akhtar

“I’m interested a doing a weeknight Indian cuisine. People assume [Indian food is] complicated and fancy, for weekends only but that’s not the case. It doesn’t have to be laborious. Beautiful Indian meals can be made in 30 minutes tops.”

Listen to Khalil Akhtar locally on Victoria’s On the Island radio program weekdays at 7:20am