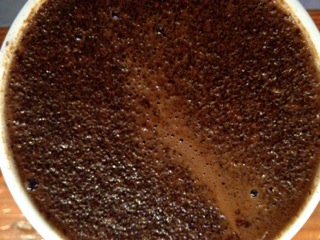 I don’t know how you find a guru, or even if they find you, but I found my coffee guru in Kelowna. As a wine guy, I normally visit to the Okaganan to taste wine. This time, however, I ended up tasting bean-based, not grape-based beverages.

I was introduced to Greg McMurray through a good friend. Though he has a ‘day job’, he has long been interested in coffee from bean to cup. He bought a small commercial grade roaster and started selling beans to friends. Then friends of friends, and their friends, and well, you get the idea. He’s now the proud owner of Fresh City Coffee, a boutique micro-roaster, located in Kelowna. He still personally delivers it to your house, outside of the hours of his other ‘real job’. When I visiting the valley a few months ago, he was kind enough to share the ways of the bean: the provenance, the roast, the brew. Each step has endless variables, so I’ve tried to simplify Guru Greg’s teachings here, for beginners, like me.

Coffee beans are actually seeds from the fruit of the coffee plant. The fruit is referred to as the cherry and contains two seeds. The seeds are called beans because, well, they look like beans.

The two most important plant verities are Arabica and Robusta. Though Arabica seeds contain less caffeine, they are considered higher quality. The highest quality of Robusta will equal the lowest quality Arabica. Robusta are higher yielding, and less prone to diseases making them much more profitable as a commodity. It is the Robusta bean that is found in most cups poured at large coffee houses worldwide.

Like the vine, coffee plants are often planted in marginal places, usually high in the hills where the nights are cooler. The plants grow in many parts of the world but are generally located around the equator. South American countries such as Guatemala, Honduras and El Salvador are common places to find the plant. Further south, Brazil has the distinction of being the number one producer of coffee beans in the world.

In Africa, the eastern countries of Ethiopia and Kenya are the most sought after for coffee, and  further east, Indonesia, Thailand and Vietnam are popular countries for coffee.

My guru explained to me that beans grown in each country have a different taste and flavor. Beans from different parts of the world, or even from different farms within the country offer a variety of different flavors. It is similar to the conversation between wine drinkers when discussing where grape varieties are grown and how they are turned into wine.

Coffee is thought to have originated in the Ethiopian highlands. One legend goes that Kaldi, the goat herder, noticed his “goats dancing” after eating the berry. Across the Red Sea the coffee plant was also growing in Yemen. Marco Polo, the Italian merchant from Venice, brought the bean back to Italy after a trip to the Arab world in the 13th century. He stopped in the port of Mocha in Yemen and to this day the word Mocha is tightly connected to coffee in many different forms. Even today, mocha coffee can refer to the coffee-with-chocolate drink, or simply to coffee brewed with mocha beans.

Once the beans are dried and processed they need to be roasted. The dried green beans can keep for a much longer time than after they are roasted.

As far the finished cup, the roasting process is the most important and this is where my Guru comes in. As mentioned earlier, he purchased a small commercial roaster, so he could have complete control over his coffee. He taught me that fresh is best and that beans are considered stale after only two weeks! When I visited, he had over a dozen different green beans from around the world, ready to roast.

The length of time and the temperature at which the beans are roasted are key split-second decisions that roasters need to make. How long and how hot are the two things to keep in mind. Roasting it long and slow will coax out different flavour profiles than if you were to heat it quickly. The roaster could control a long slow incline to the desired temperature, or a step approach to the desired roast. There is a balance that needs to be brought out by the roaster between the fruitiness and the bitterness of the bean. And in fact, like wine, the coffee tasted very different at different temperatures. I was able to detect many more flavours and aromas as the coffee cooled down.

Which brings me to the next step.

Once you know where the beans are from, where they are roasted and like the style, you have to grind them up. For pros, most agree upon a burr grinder. Greg shared that the finer the grind, the more potential for extraction, resulting in a richer final product. The mouthfeel comes from colloids, the suspended particles of coffee solids that are too large to dissolve fully, but small enough to pass through a metal filter, common in most coffee houses these days. For a cleaner cup, paper filters are best. A maximum of 4 minutes per brew is best and water temperature should be between 198-204F.

Greg has found some other disciples at Milkcrate Records in Kelowna. McMurray explains, “I coached them through the process of becoming clear about their coffee vision as it relates to their business. They now serve my coffee as a pour-over using all the right specialized equipment. They have gone from seeing their coffee as a necessary evil – an additional source of revenue, to having fun with it. It is now a natural extension of their relationship with customers, and a source of pride.”

Here in Vancouver, Revolver Coffee offers flights of coffees. The combination could be three different beans, or even one bean brewed three different ways. They also sell beans from roasters along the west coast. Another great coffee shop in Vancouver is Matchstick. There they actually roast the beans on site and have one large communal table where you can met other coffee drinkers and discuss different roasts, or at least current events.

However, one of the most complete tasting experiences I know of happens in Seattle at Stumptown. Each day at 3pm they host a proper cupping, the term used to taste different roasts. There you can taste up to 5 different beans from around the world, led by a coffee hipster that fits all stereotypes, and has unprecedented passion and knowledge.

From source to shop, cherry to cup, there are endless combinations along each step: the aspect and altitude of where the cherry is grown; the length of time the bean is roasted; the way the ground beans are brewed; the quality of the water used; and the temperature in which the final cup is consumed. You don’t need your own guru. Armed with a bit of knowledge you can find your own way to create your favourite cuppa.

Superflux Cabana has opened upstairs at 804 Broughton St (the former location of The Livet). Featuring lots of Superflux beer and a menu that ...
Read More
January|February issue is on the stands! Pick up a copy, or read the digital version. Read ...
Read More
Coffee doesn’t stunt your growth, especially when you’re Caffe Fantastico. They started slinging ‘spro from a tiny cart on Government street, ...
Read More