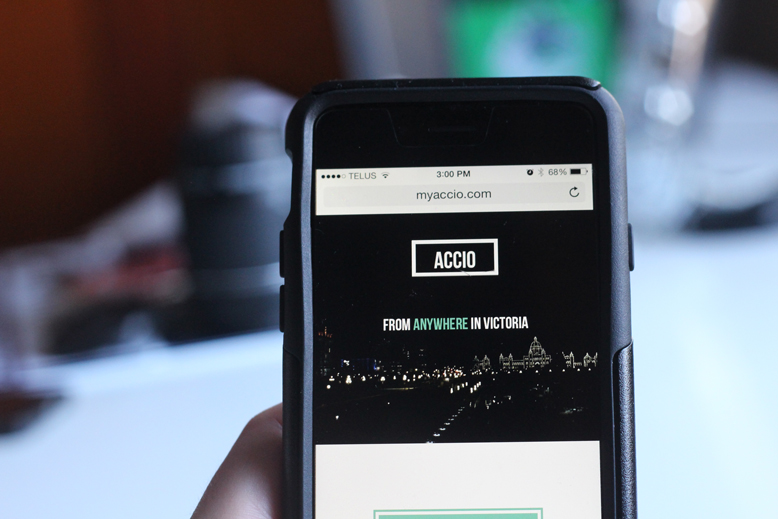 Startup culture has invaded Victoria and the entrepreneurs of YYJ have found their next target: food. I’ve found three new ventures that want to change the way you order takeout, pay for a meal, and decide where to eat. 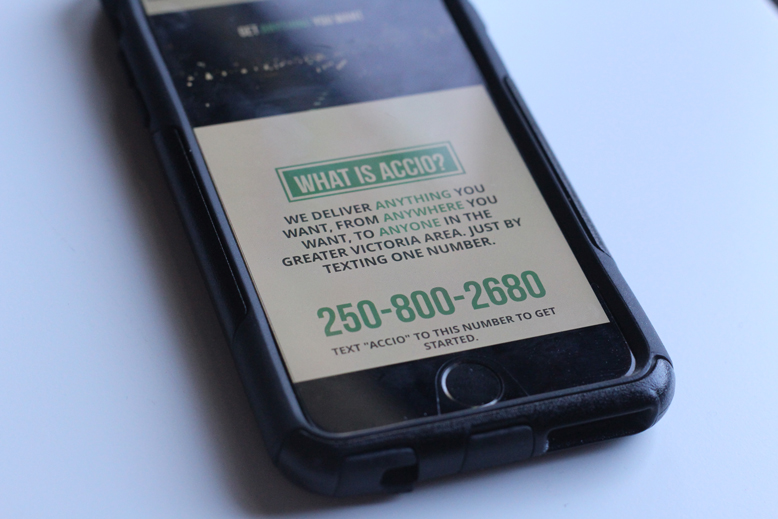 Co-founded by Mike Rowe and Carla Smart, Accio is like a digital personal assistant that lives in your phone. The system is simple. Text Accio your request (fried rice from Foo, a bottle of wine, and a bouquet of flowers, for example) and they’ll deliver it to you. Their only rule? Accio will get you anything as long as it’s legal.

In just under a month—Accio launched March 9—fifty orders have been completed, the majority involving food. When Accio receives an order, they source and price the items and then confirm with the customer. They charge a 10 per cent premium on the cost of the item, $5 for delivery and 20 per cent gratuity.

“We find that, as a trend, people are becoming busier and more aware of how much their time is worth to them. Many people would rather do something they enjoy than going out to do chores, and if they can pay someone a fee to do unwanted tasks, they will do that. This is also the reason why we want to implement services in the near future,” says Smart. “Making it as easy as possible to get what you want or get your chores done is ultimately the service we wish to provide.”

For those tech nerds like myself, Accio is built using the latest internet-based services. Smart says the entire project came together in one weekend, for under $300. “Because of the low start-up costs, we had to make use of bunch of existing services such as Twilio for the phone number; Front to send and receive messages from customers; Themeforest for a website template; Stripe for payment processing; Slack for team communication and integration with Front and Stripe; as well as Zapier to integrate accounting and bookkeeping.”

Rowe and Smart know Victoria is a relatively small market, but hope to employ three or four drivers and one dispatcher. Long term, Vancouver and Toronto are potential markets. 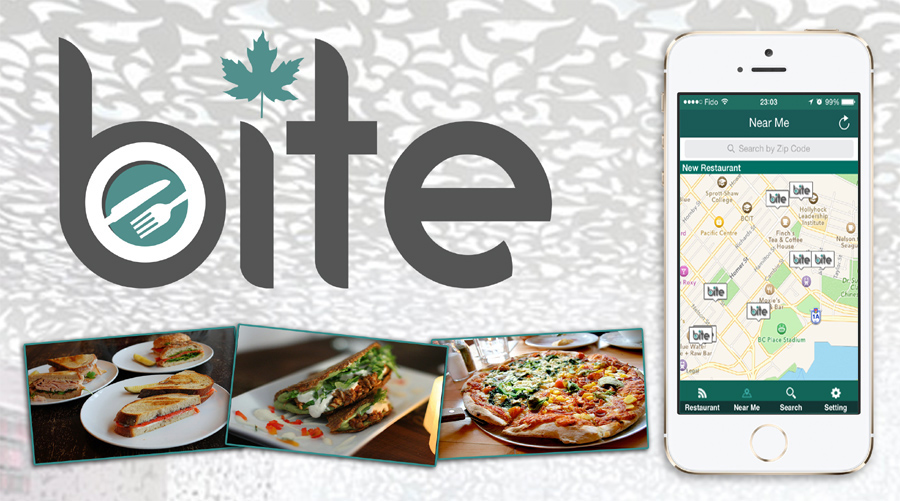 While it hasn’t made the ferry trip to Victoria, Bite BC is determined to change the way diner clubs operate by going all-digital. After downloading the app—iOS or Android—users can enjoy two for one or 50 per cent savings on their food bill at participating Vancouver restaurants.

Transactions take place at point of sale and the app utilizes GPS to highlight participating restaurants. Users make reservations directly on their mobile device. Bite BC is free for the first three months. Six month or yearlong memberships can also be purchased.

“Unlike other coupon competitors, Bite BC can be used almost any day of the year, as many times as you want. If you’ve fallen in love with a meal or enjoy treating your friends, you can enjoy those discounts without an expiration date or rushed ‘one time only’ kind of deal,” says Poya Farighi, Bite BC founder and CEO.

“We are currently in the very early days of our business, but since our launch we have already had nearly 4000 members sign up to trial the app in Vancouver. This is a great start for us and we have big plans for the future,” says Farighi.

Or on Google Play 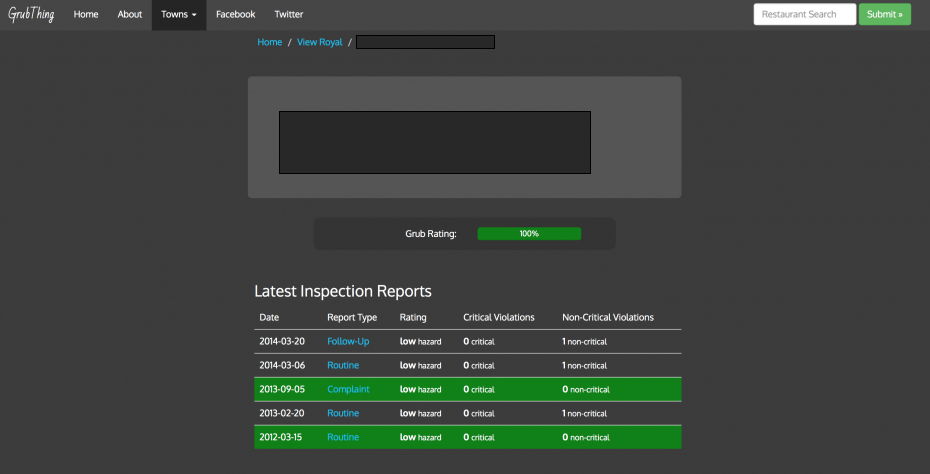 At its heart, GrubThing is a restaurant rating website. It answers the question Where should we eat for dinner? But GrubThing doesn’t care about food or level of service. Instead, it uses VIHA’s restaurant inspection reports to rank Victoria area establishments. The list is extensive—reaching from Sidney to Sooke—and doesn’t just include restaurants, but also 7-11s and grocery stores.

I spoke to Grub Thing’s creator, Kevin Boyd, about his data-driven project and what’s next for the local developer. 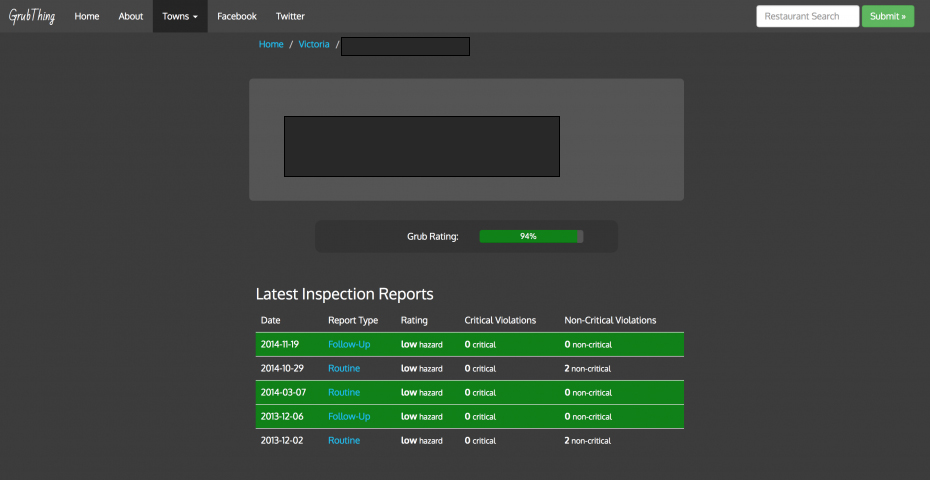 By analyzing the five most recent VIHA health inspections, GrubThing shows a quick overview of how closely a restaurant has complied with health codes. If you’re a squeamish person, you might want to steer clear of facilities with extremely low ratings. Any restaurant that’s currently operating is going to be reasonably safe to eat at, regardless of the rating.

I started building GrubThing in my free time about four years ago, but didn’t launch until January of this year. Because VIHA doesn’t currently share its information in a computer-friendly format, such as an API, I had to reverse engineer their public web pages to fit the data nicely in my database.

What’s the reception been so far?

Success is difficult to gauge on a project like this. There has certainly been praise, but it hasn’t come without ruffling a few feathers. Overall, I just hope that the community finds it useful and maybe even fun.

I have spent my career thus far with a few goals in mind: climb the brigade of each kitchen I set foot in, put in my time and become “chef”. ...
Read More
This year marks the 10th annual Terroir Symposium in Toronto, described as “a gathering of dreamers, disruptors and international luminaries in the ...
Read More
Recently, The Japan Rice and Rice Industry Export Promotion Association visited Victoria to host a special event called The Fine Grain: New Cuisine ...
Read More
...
Read More
Valentine’s Day has developed polarizing opinions. While one friend might call it “decadent” and refuse to participate, another might point out ...
Read More
Saturday, February 14th is right around the corner and for some of you that means sweet, sweet love. And of course, since the way to one’s heart is ...
Read More

July|August issue on the stands. Read ...
Read More
It’s mid-week, you’ve worked all day, the house is a mess, and dinner still needs to be made. The very thought of a sink full of dishes is enough ...
Read More