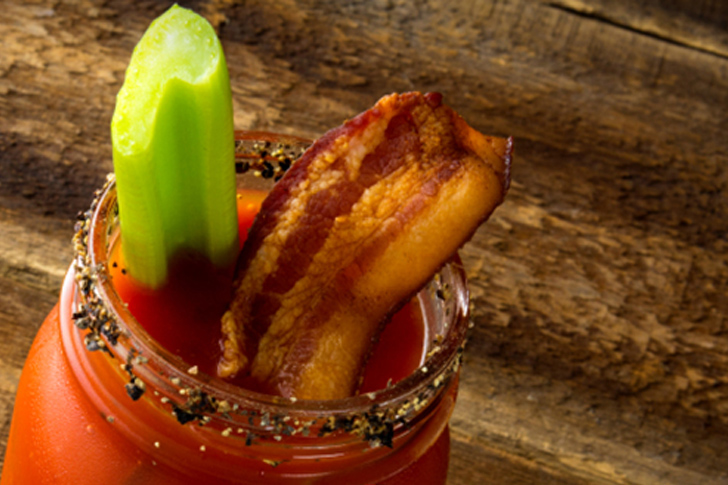 Canada’s “national” cocktail, the Bloody Caesar was invented in 1969 by bartender Walter Chell to commemorate the opening of Marco’s Italian restaurant at the Westin Hotel in Calgary, Alberta. Using Italian cuisine for inspiration he took the flavours of Spaghetti Vongole (spaghetti with clams) and came up with a mixture of hand-mashed clams, tomato juice, vodka, Worcestershire sauce, salt, pepper and garnished it with a celery stick. He named the cocktail after Roman Emperor, Julius Caesar.

According to local legend, he served it to one of his first customers, an Englishman who after tasting the cocktail exclaimed that’s a good “bloody Caesar” and the name is now Canadian cocktail history. With the creation of Mott’s Clamato in the same year, the “Bloody Caesar” quickly spread across Canada. Today, the Bloody Caesar, is still Canada’s best known cocktail and is a permanent fixture on Canadian bar and restaurant menus from coast to coast.

While it is hard to pinpoint who first created the Canadian “Bacon Caesar”, there is no doubt that bacon is currently the “it ingredient” for a Bloody Caesar in British Columbia. From bacon infused vodka or bourbon to a garnish of bacon or a rim of bacon salt, we look at eight restaurants currently offering the “Bacon Caesar”:

Edible Canada at the Market

Made with vodka, clamato, Worcestershire sauce, bacon salt, and fresh horseradish. Served with a stalk of celery and maple candied bacon skewer.

Made with house made bacon infused vodka, Dubonnet, celery bitters, house made spice sauce and clamato. Accompanied by a rim of house smoked dehydrated beach oysters and celery salt.

Bacon infused vodka Caesar garnished with a strip of bacon.

Made with house made bacon vodka, spice and dehydrated beer rim. Served with an olive.

At Home with Lynn Crawford

July|August issue on the stands. Read ...
Read More
When thinking about a value wine (my annual January theme) to welcome in the year of the Dragon, Chile’s Cono Sur roared to the forefront. Since ...
Read More