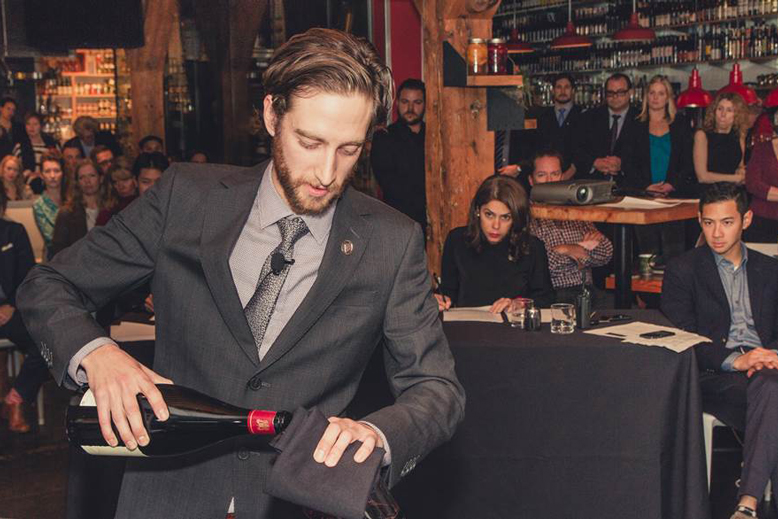 Celebrity chefs have been around for a while, but rock star sommeliers are a newer phenomenon. The mousey definition of “wine waiter” doesn’t begin to describe this group of passionate, dedicated, curious and often flamboyant individuals.

Pictured above: Chris Turyk, from Unsworth Vineyards, demonstrating red wine decantation (under the watchful eyes of judges and spectators).

A wet Monday on Granville Island saw 14 sommeliers gather at Edible Canada to compete for the title of Best Sommelier in B.C. This is the first competition of its kind in BC and was organized by the Canadian Association of Professional Sommeliers (CAPS) in affiliation with Association de la Sommellerie Internationale (ASI). I was excited to be part of the event; helping to prepare and then mark the theory exam, and acting as a guest for the service assessments. There was strong representation from the Island, with four people competing: Carmen Parry from Bear Mountain Resort; Jacques Lacoste from Lure Restaurant at the Delta Ocean Pointe, Kyle Bruce from the Fairmont Empress and Chris Turyk from Unsworth Vineyards. I asked why anyone would choose to do this. Turyk laughingly says that he did it on a dare from Terry Threlfall, a well-respected sommelier, previous Best Sommelier in BC recipient and one of the competition organizers. More seriously, Bruce highlights the opportunity to push yourself and learn and adds that it “builds comradery between us in the industry, and brings light to what we do.” Little did they know what was coming. A brutal theory exam that was designed to stretch the pack set the tone for the day. Behind closed doors, more than one marker was heard to mutter, “glad this wasn’t me”. Indeed. Grape growing, winemaking, history, legislation, cocktails and food and wine pairing were all covered. Add in a couple of blind wines and the pressure was definitely on. No wonder that the competitors came out looking dazed and in need of a restorative drink. 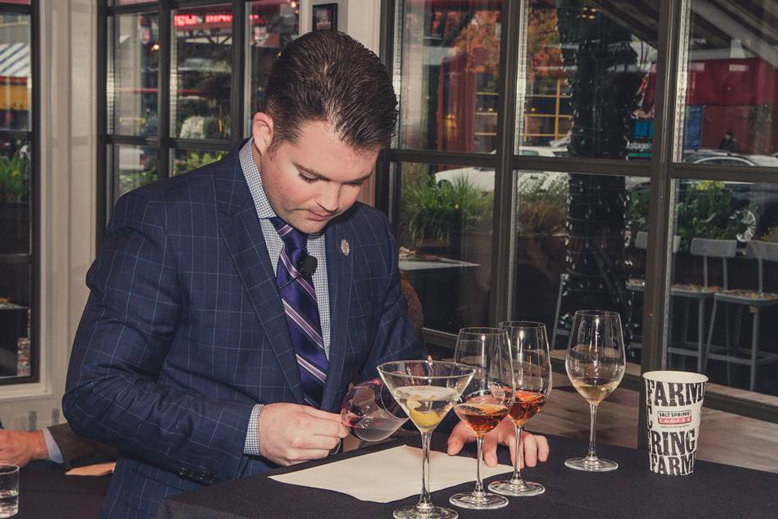 Shane Taylor, from CinCin, steps up to the blind tasting challenge

The top three moved onto the afternoon. One by one, Jason Yamasaki from Chambar, Shane Taylor from CinCin, and the aforementioned Chris Turyk stepped up to perform five nerve-racking tests in front of the judges and an audience of friends, family and industry peers. Turyk was the last to appear and he compared the two hour wait to hitting your funny bone; very uncomfortable but all you can do is smile. 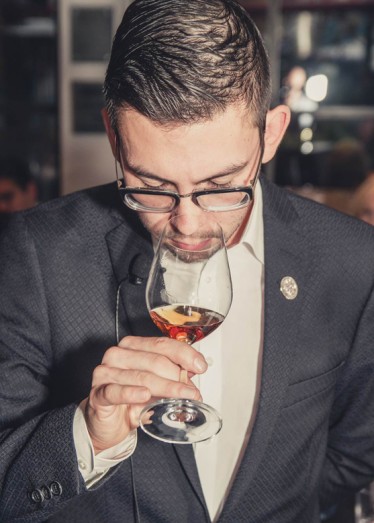 Jason Yamasaki from Chambar, B.C.’s Best Sommelier, all business in the best tasting round

First up was sparkling wine service. No matter how satisfying a loud pop can be, now was not the time to enjoy. All competitors navigated this one beautifully. Red wine service came next came and as one of the “guests”, I had a ringside seat. I ordered a magnum of wine and the competitors had to decant it while being grilled by me and my “date”, Bryant Mao from Hawksworth Restaurant. Hands were definitely shaking – either from the pressure or just the sheer weight of that magnum – but professionalism and poise saw everyone through without spills or broken glass. The third test was food and wine pairing. Just five minutes before they came in, the competitors were given a tasting menu. Upon entry and  before the judges, they were asked to recommend suitable wine pairings. The request for non-Canadian wines caused one competitor to quickly re-adjust, but he came back strong. That’s what life on the restaurant floor is like. Guests are never predictable. The audience sat forward when a wine list, littered with errors, was projected. The silence was noticeable as everyone scrutinized the list, trying to find more mistakes than the competitor. Of course, we had the opportunity to learn and the third time through it was hard not to feel just a little superior as the list was revealed to Turyk for the first time. Saving the best – or the worse – for last, the fifth event was the blind tasting of five products. Blinds are humbling at the best of times. The pressure of doing a blind tasting out loud in front of your peers is like that nightmare where you are walking down the street naked – only you pinch yourself and you don’t wake up. You are exposed and have nowhere to hide. It was fascinating to hear the oral tasting notes and try and guess the wines. They were amazingly consistent, so I assume they were all close. Ultimately, Jason Yamasaki was announced as B.C.’s Best Sommelier. Taylor placed second, and Turyk an impressive third. Yamasaki wins the right to do it all again at the “Best Sommelier in Canada” competition in Ontario next spring. From there he could make his way to the World’s Best Sommelier contest in Argentina 2016, where he can expect TV cameras and an audience of over 5,000 to be watching. Who knew this was such a spectator sport?

I asked Bear Mountain’s Carmen Parry what her takeaway from the inaugural BC competition was: “I did the competition to test my skills and to see what and who I’m up against for entering next year. I also wanted to network with some of the other sommeliers around the province and to support our industry. I would absolutely do it again, pretty much going to start studying now…  I think the written exam was a little on the tough side, but it definitely needed to be to really determine the top three. If the exam was easy and everyone did well it wouldn’t be a good example of our talents either. The service portion was great. I think that was the real fun part for everyone (especially those of us in the audience!)”

There has been a huge rise in the number of people taking wine courses in recent years and many of them claim the title of “sommelier”. This competition demonstrated that being a sommelier is so much more than passing an exam. Each and every one of the top three are obviously wine smart and can gracefully open a bottle of wine standing on their heads. My lasting impression is how each of them tried to make a personal connection with the table guests – even in the fake environment of the competition. They all clearly believe that they can help make a great dining experience, and understand that means knowing your guests and adapting to suit them. Outgoing and passionate, yes. Pretentious and snooty, no. Rock stars to their guests, definitely.

July|August issue on the stands. Read ...
Read More
It’s the middle of February and Gabe Epstein has a large basket of home-grown vegetables on his kitchen table. While the potatoes and garlic are ...
Read More