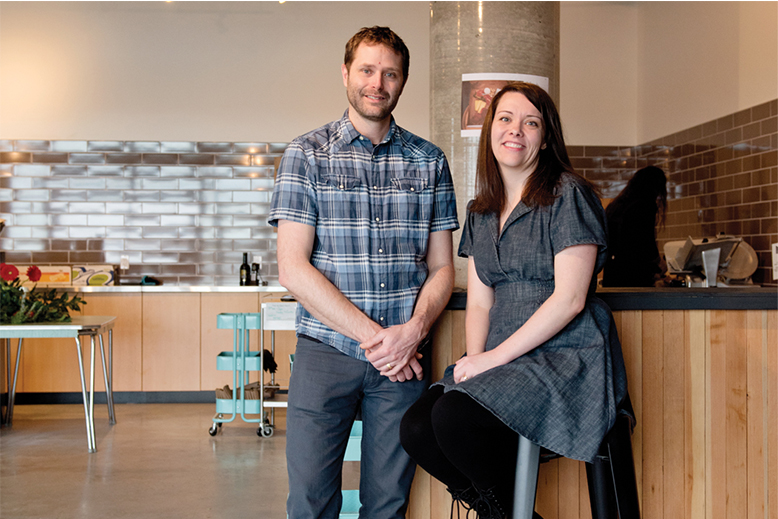 “A full of beans love story for owners Ryan and Kristy Taylor.”

It’s a Thursday morning at Caffe Fantastico. You are standing in line for your daily café Americano. You are vaguely aware of the smell of roasted coffee, the screech of steam coming from the espresso machine, and the action happening behind the counter. You thank your barista, pop the lid on and, in an infinitely small moment as you take that first sip, you have a rush of deep satisfaction and appreciation for the quality and craft of your beverage. You are, for an instant, relieved of the pressures of time and space. The moment passes, you glance at your watch and hurry out the door, and your cup of coffee just becomes part of the minutiae that makes up your day.

Let’s rewind and unpack that small moment. Good coffee doesn’t just happen. Good coffee, and what it can do for the mind and spirit, takes a lifetime of thought, intention and an unrelenting dedication to cultivating the best possible coffee drinking experience.

On a busy Tuesday afternoon in January, EAT magazine sat down with Caffe Fantastico owners Ryan and Kristy Taylor. Over a cup of their house roast, they relaxed comfortably in the busy surroundings of the newly renovated Kings Road location, the place they first met. Two decades ago, Ryan was slinging demitasse to tourists in the Inner Harbour. Today, the Taylors have built a mini-empire on their standard setting coffee, opening brunch and bistro destinations and now a fine cheese and charcuterie deli as an expansion of the Dockside Green location.

Teenage love: it’s the type of love that will make you or break you. That first tryst has the potential to define who you are for the rest of your life. For Ryan Taylor, it did just that. Ryan reminisced about a trip to Japan in 1990 when he was just 16 years old. He became enamoured with how Japanese coffee culture invited people out of their tiny houses to congregate around a cup of coffee and good conversation. Ryan had taken to hanging around Pagliacci’s just to score a decent shot of espresso, and he became convinced there must be a better way to bring good coffee to the people of Victoria. After high school, he began to formulate an idea: he was going to make it his mission to open up a coffee shop. For an 18-year-old this is a pretty good mission to have.  Business-minded, entrepreneurial and single-minded, but ambitious nonetheless.

His little coffee cart, Espresso Fantastico, was born after a brief fling with college, a one-night stand with a city tender application and a frenzied affair with a nail and hammer in his backyard. Pooling together a few small investors, some paper route money and a borrowed parental credit card, Ryan opened for business in the Inner Harbour. Within weeks of setting up shop, a community had sprung up around him. “I had porcelain from day one. I wanted to make sure people could hang out.” Tourists, buskers and locals had such an appreciation for Ryan’s coffee that he cultivated a loyal following that would help to establish Caffe Fantastico in later years. “Tourists would come and spend a week here in Victoria and tell me the cart was the first and last place they would visit.” Ryan was beginning to understand that it was less about the venue and more about providing a quality espresso to those who appreciated it.

When talking about those early years, Ryan remembers the off-season with a particular fondness. “I would travel around the Pacific Northwest Coast meeting people and having amazing conversations on coffee.” This is where Ryan truly got his education, garnering the interested ears of the vanguards of modern coffee culture, people like David Schomer of Espresso Vivace and Dr. Ernesto Illy (yes, that Illy). He attended roasting workshops and began to develop relationships with suppliers, always chasing the bean that would produce the best cup of coffee. In 1996, Ryan bought his first roaster. “I stopped drinking coffee for five months … and tasted only the coffee I roasted.” He concentrated on understanding the unique flavour profiles developed through the roasting process and finally, when the cart reopened that year, he had his roast, the same espresso blend you drink today.

Ryan spent two years searching for a place to finally build his café. He had always been attracted to Quadra Village for its population density, diversity and sense of community. In 1998, as Ryan turned 24, he finally opened Caffe Fantastico on Kings Road. The café was built as a solo mission, and Taylor’s quest to find that perfect bean had been a deeply personal journey. When Kristy Abel walked in and bought a $2 latte just after Caffe Fantastico opened, the long journey finally became an adventure that Ryan could share with someone else. As Kristy recalled that day, she wrapped her hand into the crook of Ryan’s elbow and blushed a deep red. “Ryan poured a heart on top of my coffee and I thought, “game over.” I walked home and I called my best friend and said, ‘I just met the man I’m going to marry’” And so it was: Ryan had his café and now a partner who became equally dedicated to enhancing and diversifying their standard setting coffee.

Ryan and Kristy would continue the pursuit to find the best possible coffee by travelling to the source of their beans. In 2000, they travelled to Tepic, Mexico, just outside Puerto Vallarta, with a shoestring budget of about $1,000 and directions written out on a cocktail napkin. They went to meet the farmers, to investigate the working conditions and to better understand how coffee farming was impacting the community. They found that one of the reasons the bean was so good was that these farmers shared their passion. The farmers used profits to pay into education, build better infrastructure and enhance labour conditions. Happy and self-invested farms produce better coffee and will continue to work for a better bean.

Ryan has a personal philosophy in sampling coffee beans: he does not want to know the price, ever. He has always been willing to pay for a better bean if it means he is able to produce better coffee. This is what he tells the farmers who supply him, and the farmers are more than happy to oblige. This philosophy, coupled with a core belief that quality working conditions and a shared passion make a better cup of coffee, has followed him all over the world in a mission to continually improve the quality of coffee at Caffe Fantastico. Ryan and Kristy have developed relationships with farmers in Mexico, Guatemala, Panama and Ethiopia, with Nicaragua next on their list. They have a deep respect for ethically run farms, and this is reflected in how they manage their now 65 employees, some of whom have been at the café since the beginning.

Over the past two decades, Ryan and Kristy Taylor have brought up two children and expanded the Fantastico family to include brunch and bistro spots (Caffe Fantastico and Tre Fantastico) and now a bar and deli. The recently opened Dockside Green deli is reflective of the Fantastico penchant for becoming intimately involved with the products they are serving. Kalynka Cherkosh, a long-time friend and collaborator of the Taylors, makes a point of meeting with the cheese makers and the ranchers who produce their beautifully curated selections of meats and cheeses. The expansion of Caffe Fantastico is an extension of the passion the Taylors have for bringing a community together in a shared love of fine coffee, fine food and fine company. But at the end of the day, it will always be about the coffee. It will always be about the singular idea that coffee can be better, that handling coffee from source to cup, with a profound respect for the bean and those who produce it, will yield that infinitely small moment of deep satisfaction and appreciation that comes with the first sip of your morning coffee.

Victoria, BC – Level Ground Trading, Victoria’s Fair Trade pioneer, is moving from their current location in Central Saanich, to a larger ...
Read More
GROWING UP IN MANITOBA TAUGHT ME TO APPRECIATE SEASONAL fruits and vegetables. Unlike Vancouver Island, Manitoba has a brief growing season. All of ...
Read More
If you are a visitor to Oak Bay village, you may have noticed the papered window in one of the empty stores in the historic Bell Block. In a clean, ...
Read More
Oughtred Coffee & Tea has been roasting and selling coffee in Nanaimo since 1973. Over the years they have grown to serve much of Western ...
Read More
...
Read More
Back in 2000, Elysian Coffee opened its first café around the corner from Vancouver’s Fifth Avenue Cinemas. It did things differently from the ...
Read More

The article on L’Apéro in the May|June issue should have stated Chef Andrea Maiolo staged at The Courtney Room and Zambri’s and that he held the ...
Read More
May|June issue on the stands. Read ...
Read More
It had taken me six years of living in Victoria, but I had finally figured out what Beacon Hill Park was usually missing: the smell of burgers, ...
Read More