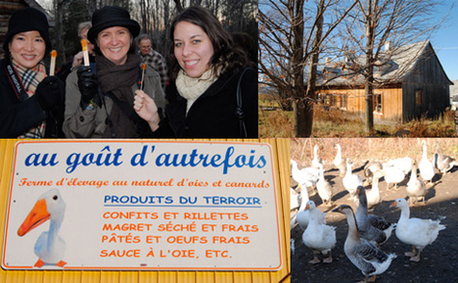 For five crisp, mostly sunny November days I am treated, along with six other journalists (all from the US) to Quebec City’s culinary charms.

We are thoroughly taken through and with the city’s architecture and history, bistros, craft breweries, and the understated elegance of L’Auberge Saint-Antoine in the Old City. But a side-trip to L’Île d’Orléans, “the Garden of Quebec”, a mere ten-minute drive from Quebec City really captures our hearts. The “garden’s” famed strawberries are long gone and a number of boutiques and auberges have rolled up the carpet. Although the quiet, rolling landscape beneath pale wintry sun would seem to suggest otherwise, all is not asleep. Behind the scenes, local artisans keep our little group hopping. We swizzle popsicle sticks through snow laced with maple syrup to make sweet lollipops at Cabane à sucre l’En-Tailleur, (kinda touristy but so much fun), tour Boutique Cass’Isle D’Orléans, where Noëlle Capitaine (who speaks not a word of English) and her husband make barrel-fermented black-currant vinegar, in much the same way Vancouver Island’s Venturi-Schulze Vineyards fashion its terrific Balsamic vinegar.

After sampling apple butter and sipping cider at Cidrerie Bilodeau’s the amiable hosts bid us adieu with a hot apple pie, its spiced apple filling oozing through the flaky crust. Earlier in the day our little group had popped by Vignoble St.Petronille, the island’s organic winery. Proprietor Nathalie Lane set down pruning shears long enough to taste us on and sell us a couple of bottles of Voile de la Mariée (the name means bride’s veil), a floral and honeyed nuanced white wine which we tote with us for lunch at Table Champêtre Ferme Au goût d’autrefois. Jacques and Lise Legros manage entirely the farm and restaurant themselves. The restaurant is open May-October and year round for groups. Ducks and geese peck happily in the yard—until our arrival kicks up a squawking fuss. Inside the 200-year-old house Lise’s smile and home cooking warms us tip-to-toe. Seated at a long harvest table set with mismatched ware, we tuck into a trio of melt-in-your mouth rilletes from their own birds, which also include wild turkeys, and move on to seared tender duck breast, with pan-fried spuds (in duck fat of course), and roasted organic carrots and Brussels sprouts grown onsite. Every one of us vows right there and then to return to this bit of paradise.

As usual with press trips I tack an extra day to toodle about on my own. On a frosty Saturday morning I wander through the Quebec City’s Vieux Port Market, clutching an espresso allongé, mixing in with the locals, chatting with vendors amused (mostly) by my dreadful French, and mulling on how I might trundle back to BC large jars of pickled free-range eggs, locally made duck rillettes, pork sausages, game terrines, and rabbit pates. During my musings I munch on spectacularly sweet purple and yellow carrots and honey crisp apples, sample exquisite cheeses, and sip on iced-apple cider and Val Ambré, an artisinal elixir, akin to Pineau de Charentes but distilled not from [Ugni Blanc] grapes but from maple sap and alcohol.

It’s with light heart and but extremely heavy suitcase I leave for the airport.

So many Canadian growers, producers, winemakers and craft brewers are doing their damndest to “keep it at home”. This year I hope to discover our prairies. Alberta, Saskatchewan, and Manitoba, I know, are also using grit and determination, and working with chefs to keep local alive.

The article on L’Apéro in the May|June issue should have stated Chef Andrea Maiolo staged at The Courtney Room and Zambri’s and that he held the ...
Read More
May|June issue on the stands. Read ...
Read More
An untraditional take on a classic recipe using local West Coast ingredients, leftover rice, a few kooky twists and just one pan. Hooked yet?   ...
Read More