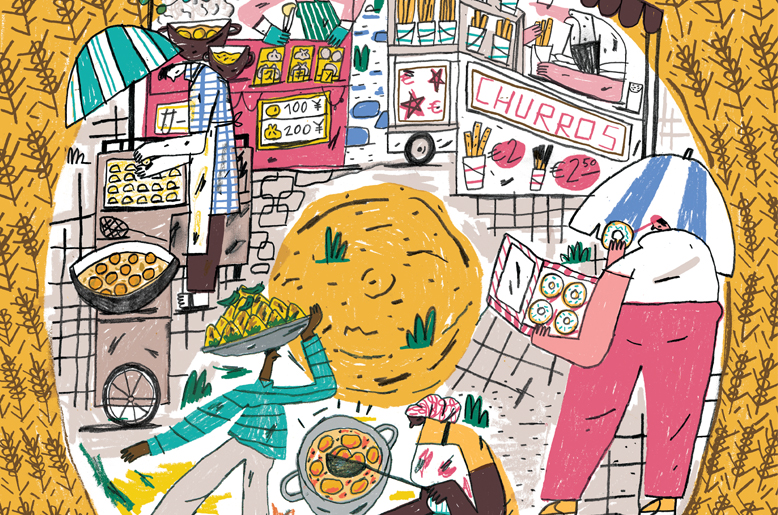 Forget the UN and global summits, the simple pleasure of deep-fried dough unites people from Mongolia to Mexico.

What is it about some flour, some water and some hot oil that lights up the senses of any sane human being? I’m talking about any fried dough, here: as long as there is flour and water and it is fried, then it fits in this category. A broad one, I know, but there is something essential in our culinary spirit that draws every culture towards fried dough as a universally accepted comfort food. Think about it. Have you ever travelled to a country, a hilltop or far-off hamlet and not found a cultural variation on fried dough? No. No, you haven’t.

Having travelled extensively and to a number of countries where the culinary palate is not extensive, I can attest to the relief I have felt when I have finally stumbled upon that country’s variation of fried dough. Two years ago I moved to Northern Uganda for a time. My options were boiled corn flour, boiled millet flour, boiled sweet potatoes, boiled goat and boiled chicken. One day, as I trudged down a hot and dusty main street in Gulu Town, a scent hit my nose: Remarkable and unmistakable—it was fried dough.

I walked up to what can only be described as a shack with various goods hanging from it, but off to the side in a wide, thin wok-like pan, plump little pillows of fried dough bobbed on a surface of highly questionable oil. I was transported. A wave of familiarity washed over me. I found home. Mendazi, or doughnuts if you must, was my weekly reprieve in Uganda. They weren’t always great, they didn’t taste of much, but they were familiar, and armed with the promise of fried dough I powered through many a day filled with the boiled and the bland.

Crispy and golden on its exterior, fluffy and white in the interior, their oily sheen creates transparent patterns on our napkins. I have described the sound of biting into a perfect piece of fried dough to my husband as “escrunch.” You know what I’m talking about: when your teeth break the surface and sink into layers of fluffy bread or pastry, the oil squeezing out along the sides of your tongue. There is a deep sense of satisfaction, warmth and remembering when we have that perfect doughnut, that perfect piece of fry bread. One of the simplest explanations for why fried dough can be found in virtually any culture’s culinary repertoire is that it is prepared with staple supplies and is easy to make. It’s a basic survival food: if you have flour and some form of fat, you can have fried dough, which will make even the worst boiled goat stew palatable.

Fried dough transcends cultural boundaries and has a deep and storied history. There is evidence that the frying of various forms of dough occurred between 8000 and 5500 BC, after the invention of pottery allowed for oil to be heated in pots. Imagine that discovery: One day you’ve got some useless weeds that plague your landscape and the next day doughnuts enter your life. I pinpoint this as the exact point in time when we became civilized (or did it mark the beginning of the decline—you be the judge).

The art of deep-frying was truly developed in Japan, then brought to China around 600-700 BC. Between the 1440s and 1530s, the Portuguese were the ones who could claim responsibility for spreading the gospel of fried dough. Under the flag of colonization they brought subjugation, disease, war and forced assimilation, but heck if they didn’t repay the favour by bringing some good old golden fried flour and water to North and South America and, later still, to Hawaii.

At the turn of the 19th century, American writer, historian and diplomat Washington Irving made reference to doughnuts or “sweet balls of dough” (I feel as if he and I have very similar talents, minus the diplomacy), a creation or transplant of the Pennsylvania-Dutch. The modern day American fervour for funnel cakes, doughnuts and other forms of sweet fried dough was solidified in the American psyche forever when it became fashionable at the Chicago World’s Fair in 1893.

Fry bread however, the Native American variation, has a more painful narrative attached to it. Navajo fry bread originated more than 152 years ago when the United States forced Native Americans to make the “Long Walk,” a 300-mile journey from Arizona to New Mexico where they were to be resettled. As they crossed the land, they were unable to cultivate their traditional harvest of beans and vegetables. In order to prevent their captives from starving, the U.S. army introduced them to flour, sugar and lard—the makings of fry bread.

The doughnut—the king of all fried dough—has a very interesting and disputed history. The Smithsonian Institute rightly states, “Of course doughnuts in some form or other have been around so long that archaeologists keep turning up fossilized bits of what look like doughnuts in the middens of prehistoric Native American settlements.” So please, let’s not get all high and mighty on how America and their European diaspora invented the doughnut. It was idolized long before that.

The doughnut, as we know it, apparently came to New Amsterdam (now Manhattan) with the Dutch, who managed to make doughnuts truly unappetizing by calling them olykoeks, or “oily cakes.” In the mid-19th century, Elizabeth Gregory, the mother of a merchant ship captain, used her son’s spice cargo of cinnamon and nutmeg as well as lemon rind to punch up the flavour of the olykoeks she sent with him on his voyages. Finding the dough would not cook through to the centre, she stuffed them with hazelnuts and walnuts. And there we have a neat and tidy origin of the name “doughnuts.” Where did the hole come from? Gregory’s son Hanson gets the credit for that. There are numerous variations on how and why Hanson made the hole. One theory claims that, in need of both hands to steer the ship, he jammed one of his mother’s doughnuts onto a spoke of the wheel.

The thing I love about fried dough is that it is truly one of the most universal foods, something everyone can agree on (cue the furious gluten-free comments). It is simple, it is cheap, its ingredients are easily found and above all it is delicious. It is very hard to make fried dough taste truly awful. There have been many times when my own baking has gone awry, but I have always taken solace in the fact that even when I make the most egregious of mistakes, it still tastes like fried dough. Fried dough brings us together. It is the great unifier. I might not like your politics and you might not like mine, but I know for a fact that both of us want a doughnut.

FRIED DOUGH FROM AROUND THE WORLD

Mexico: Churros – A thin colander of deep-fried dough lined with ridges owing to it being piped out of a star-shaped bag

Japan: Sata andagi – a ball-shaped piece of deep-fried dough, similar to a doughnut but without the hole

WHERE TO GET YOUR DEPP-FRIED DOUGH LOCALLY

The Market on Yates

The Local General Store and other locations.

Halibut season this year opened at noon on Saturday, March 24.  At Finest At Sea in James Bay that meant all of their big boats headed north to ...
Read More
It’s popular to speculate about who might have pried open and slurped the sweet, briny meat of an oyster first. But here on the West Coast, the ...
Read More
GET FRESH With a particularly long and chilly winter behind us, and snow shovels safely stowed away, you might say we are starving for glimpses of ...
Read More
“Get Fresh” Produce shopping is evolving into an art form, or perhaps more of a sport. The demands made of local markets are known to be ...
Read More
Parsnips are the quintessential cold weather vegetable. They are also, in my opinion, one of the most misunderstood and underappreciated root ...
Read More
Peanut butter will always be a classic staple, but nut butters, spreads made from nuts and seeds can really spruce things up. Along with peanut ...
Read More