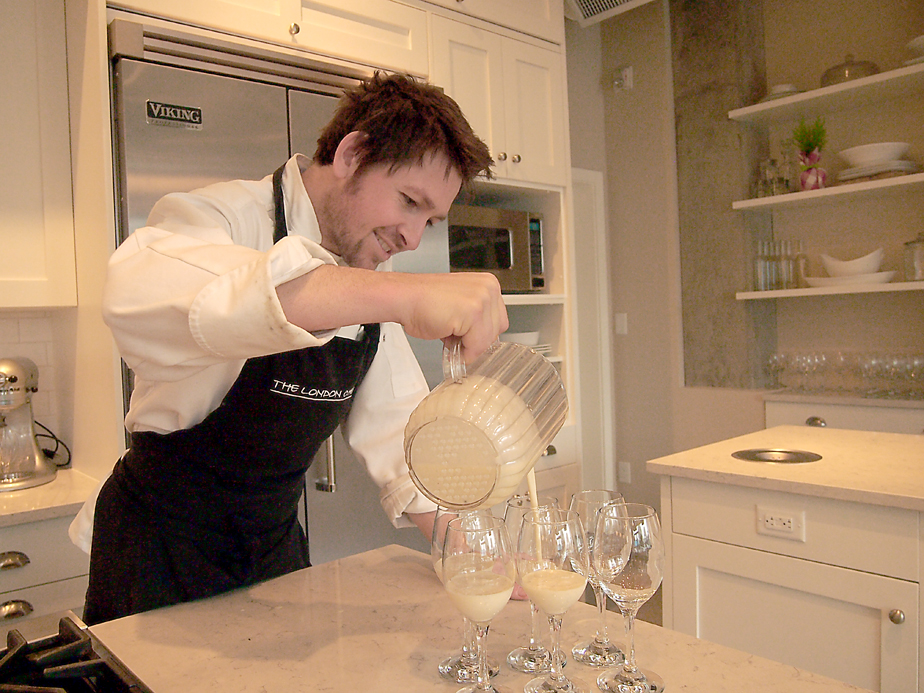 Christmas just wouldn’t be the same without egg nog, would it? Those of us who celebrate this annual holiday (and I suspect, even some who don’t) anticipate the arrival of egg nog to grocery store dairies, while visions of spiced rum fairies dance in our heads.

Unfortunately, the contemporary cartoned egg nog available at commercial retailers is a far cry from the authentic beverage of yesteryear, which may explain why there are many people out there who think it’s disgusting. It is my hope that after reading this, those who claim to dislike egg nog might be coaxed into making this recipe anyway, provided by Dan Hayes, aka The London Chef. To quote myself from my exhilarated post-interview Tweet: forget everything you thought you knew about nog.

I got to watch Chef Hayes in action in The London Chef kitchen as he concocted his own take on the festive beverage. The Microplane got a good workout, as did the liquor cupboard, as Chef Hayes threw pinches and splashes of this and that into the bowl. Every zip across the grater released a new scent into the air: cardamom, star anise, allspice. Ashamed, I admitted that until recently (meaning 30 seconds prior) I never knew that allspice is a berry rather than a blend of ‘all spices’, but I was reassured to hear that I am not the only one cooking under this misapprehension. As he worked, we discussed the ideal egg nog consistency (not too thick), Micayla Hayes googled the meaning of the word nog*, and I keenly observed with taste buds piqued.

Meanwhile, resident Calabrian chef Gianfranco looked on, flummoxed. Apparently egg nog is unheard of in Italy, and though we all took turns trying to explain it (“It’s  Crème anglaise, but with nutmeg”, “It’s a sort of drinkable custard”, “It’s just awesome, ok?”) it wasn’t until Gianfranco sipped the final product that it all seemed to finally make sense.

This is gourmet egg nog, basically impossible not to love unless you’re lactose intolerant. Plus, now that I have the recipe, I won’t have to beg the Hayes’ to move into my house for the holiday season, and neither will you!

* According to our research, the nog in egg nog may have originated from early English words meaning either wooden cup or strong ale. Recipe below.

Egg nog ready for the guests

Whisk together the egg yolks and sugar in a medium sized bowl. The mixture should be well incorporated and will become light yellow in colour.

Warm together milk and vanilla over very low heat until the temperature of a warm bath, making sure not to boil.

Once warm, add half of the milk to the egg mixture and whisk together, being careful that the eggs do not heat up enough to cook at all. Then add the egg and milk mixture to the remaining milk on the stove top and heat over very low heat, stirring often until the custard coats the back of a spoon. If possible try to raise the pot off of the flame by doubling up your burners or placing another pan under the pot.

When the mixture starts to thicken, add 1 cup whipping cream and whisk together. Continue cooking gently over low heat, then cool the mixture.

Grate some clove, nutmeg and star anise using a microplane, and then add the zest of ½ orange. Finish with the booze and enjoy!