For many schools, Home Economics is a thing of the past. As a result, students have lacked concrete education concerning cooking and the kitchen. While some schools have tried to maintain a level of nutritional instruction, the learning often stops with some diagrams and charts describing basic knowledge of food groups and the odd lesson on farm animals.

But perhaps there is a change in the air. The pervasiveness of food education has boomed thanks in part to a growing number popular television shows, and there has even been an increase in local cooking schools for not only those interested in a career in the culinary arts, but also amateurs looking to increase their comfort in the kitchen. While these educational avenues are targeted towards adults, there is no question that people are truly recognizing the importance of culinary knowledge –something that really should start from a younger age. 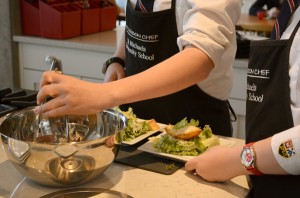 One school that is acknowledging the value of cooking in the education system is St. Michaels University School (SMUS), an established private preparatory school in Victoria. In addition to off-campus activities including rock climbing, swimming, diving, gymnastics and self-defence, SMUS has included cooking classes at The London Chef as part of the nutritional component of their Cross-Grade Physical Education Program. At two separate points during a rotation, Grade 8 students are bussed down to this celebrated local cooking school where they learn to make a full meal in less than an hour. Chef Dan Hayes captivates the young audience with his charisma and approachable personality, and does so in a fun, friendly, and respectful environment. Meals are always healthy and simple and the students do everything from scratch such as the Caesar salad dressing made with anchovies and capers – something 12 years olds might normally be adverse to, but if Chef Dan says it’s cool, then it’s alright by them.

Nancy Mollenhauer and Bruce Kuklinski both run the Middle School Physical Education, Health and Career Programs, and are proud to offer this opportunity to their students. Mollenhauer notes that many schools neglect culinary education simply due to the expensive nature of the subject matter, but mentions that thanks in part to a generous donation made by some SMUS parents, the school was able to bring The London Chef on board and create a truly priceless experience. When reflecting upon the success of this program, Mollenhauer notes that while students are leaving the class with a newfound appreciation for food and nutrition, the parents also benefit as their children are sent home with recipes and are often eager to recreate what they learned for their families. 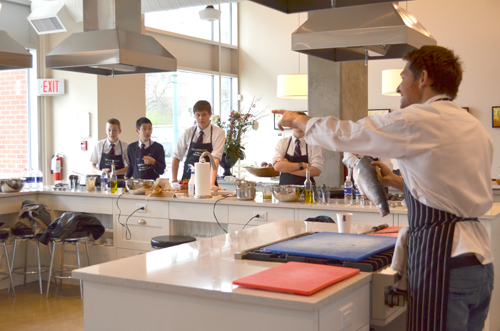 In addition to recipes, cooking skills, and kitchen safety awareness, Chef Hayes discusses concepts of local, sustainable, organic and seasonal foods and teaches students about fishing and farming practices with the goal of creating a general consciousness of what they put in their bodies. Chef Hayes emphasizes that such concepts are important to instil from an early age and will likely carry throughout their adult years. Much like the concept that if you teach a man to fish you feed him for a life, teaching students at this age about the importance of nutritional and environmentally sustainable food will no doubt create a healthier and more conscientious lifestyle for them in the future.

So while Home Ec. may be a thing of the past, it seems SMUS, along with the support of The London Chef, has figured out a much more beneficial and comprehensive way of re-introducing cooking in the classroom that could perhaps be the way of the future.

September|October issue on the stands. Read ...
Read More
August 22, 2022 — Staff, volunteers, and board members from Victoria’s Belfry Theatre have raided some of the best local wine cellars to find ...
Read More
Photo: Shaw Ocean Discovery Centre   Credit:Rebecca Baugniet “Are you ready to be transported to the bottom of the Salish sea?” It was a cool ...
Read More