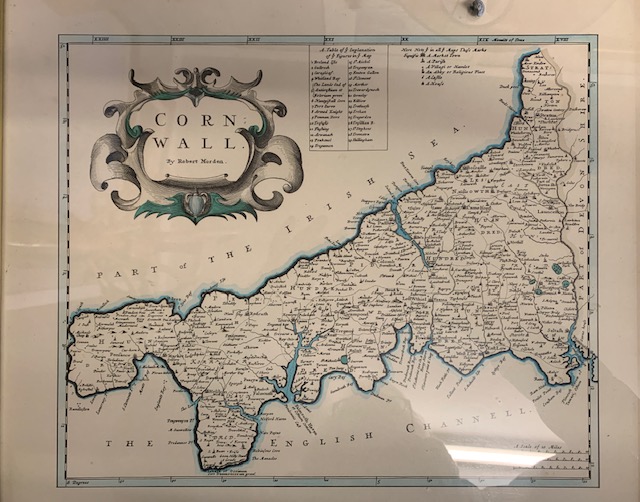 As the world shifts and changes below our feet right now, EAT thought it might be a good time to check in with our family of contributors, supporters, and friends to see how they are dealing with daily life in this new reality. This is a temporary stage in the world timeline, we realize, but one few of us will forget. Read on for the tenth story in our series.

UK to YVR : Cooking in the Time of Corona

Hiding away from the world for me started in the tiny hamlet of Trewellard (Cornwall) about a half hour’s drive from Penzance. Trudeau had been urging Canadian citizens travelling abroad to return home ASAP. I was unable to bump up my return flight on Icelandair, however, without through-the-roof rebooking fees. The RAW wine fair was cancelled, and on advice to avoid London, I stretched a three-day Cornwall visit into eight. 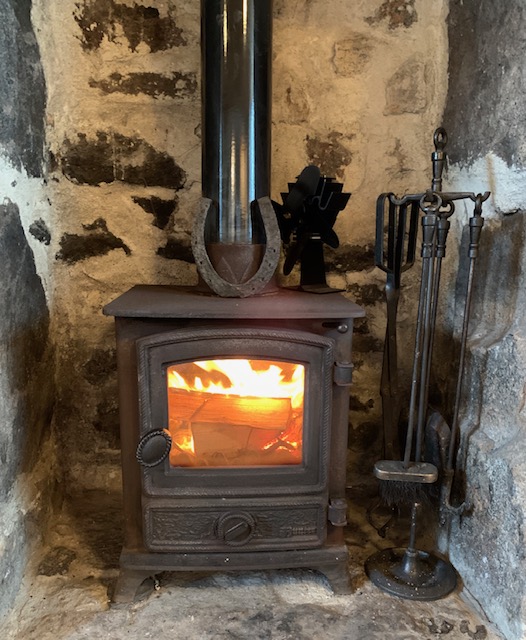 I settled into my rental, a 250-year-old cottage attached to Chy-Ser-Pren. (Chy is Cornish for house). A heavy, iron-latched door opened onto a living area revealing an iron stove set deep into a hearth, beside which was a stack of firewood. Patchwork quilts, plush throws and comfy cushions added to its country charm. But as rustic as it was, the cottage was kitted out with all the mod cons. (No boiling a kettle for a bath in a copper tub). The stove, though modest by North American standards, turned out to have best damn “hob” (stovetop) I’ve cooked on. The same went for the grill (broiler). A bookshelf held some fine British authors. A big screen SKY TV was a real bonus. And there was plenty of hand soap and TP.

Pub and bus stop, mere steps away, shared the name Trewellard Arms. I made use of the former far more than the latter.

There couldn’t have been a better hideaway from “a world gone mad,” to quote my landlord. 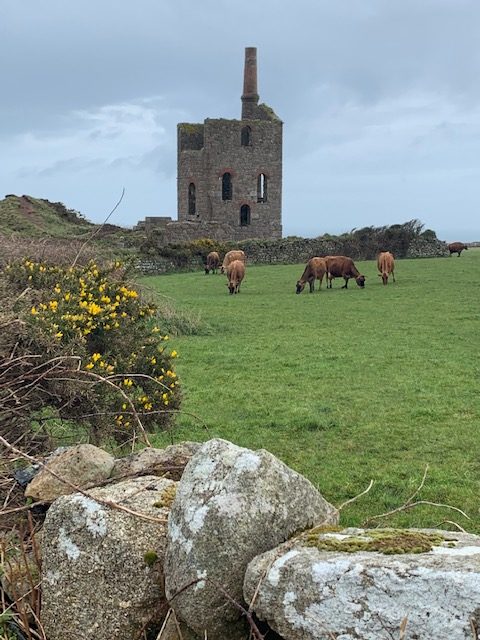 I spent afternoons strolling the cliffs listening to the waves bash the shore below or visiting defunct tin mines. The air was misty, the wind bracing. Cows grazing in a nearby field were the only physical beings within view. I’d pop into the pub most afternoons after a damp, chilly walk for a pint. The regulars were a cast of affable rural characters. One, let’s call him Jim, held a permanent perch on a stool at the far end of the bar. Everyone knew him. Still, he nursed his lager alone, rarely speaking, always hunched over a newspaper. I sat a few seats away. The second afternoon I asked the barkeep about bus information (“No idea, never ride ’em”). Jim popped his head up and piped up, reciting every schedule, route in the area, and each fare right down to pound and pence. We had a few brief chats after that. He turned out to be an articulate, if a short-on-words, fellow with a keen wry wit. I liked him.

In the evening, I lit a fire, read, wrote a little, caught up with my favourite British TV shows—and cooked. On my arrival in Penzance, I was picked up by my landlord, and while he fueled up his car for the drive to Trewellard, I had ten minutes to whip around Sainsbury’s. I filled a basket willy-nilly, tossing in smoked fish, pasta, yogurt, cheese, eggs, butter, bread, olive oil, olives, lemons, tomatoes, greens, snatching a rotisserie chicken as I dashed by the deli—and wine of course.

I took a lot of pleasure in rustling up the most eclectic meals. It might be gusty and bleak outside, but inside it was cozy, hob and hearth going strong.

The evening before I was to leave, my larder had dwindled. It held a chunk of English Cheddar, the heel of a crusty loaf, a couple of eggs, a bit of butter, and a half bottle of Rioja. Perhaps all this Englishness reminded me of my childhood. In any case, Welsh rarebit popped to mind. I hadn’t had the cheesy toast or even thought of it in years. My dad used to say Welsh “rabbit” (which is correct apparently) and did a bang-up job of making the cheesy toast when I came home from school.

Authentic Welsh rarebit calls for a generous dollop of ale or stout. (Dad splashed in milk for my after-school cheese toast).

I hastened to the pub and siphoned half of a half-pint into my flask—aka travel thermos. I had no Worcestershire, but in my possession were a few packs of mustard, brown (HP) sauce, and vinegar, purloined from a fish-and-chip take away a couple of days earlier. I grated the cheese before whisking the lot together, thinning the HP with a little vinegar. I cooled it slightly before folding in an egg yolk. The little cooker performed yeoman’s service. The cheese turned out silky smooth, yet broiled to bubbly golden brown on the crisp grilled bread. As I enjoyed the toast and sipped the wine, I watched the socially inept Doc Martin get up the villagers’ noses yet again in an episode of the series’ final season. (Yet to come to PBS or Knowledge Network.)

The next morning a scrambled last egg (and egg white), a smidgen of smoked herring, buttered toast (the crust), and a mug of strong black tea sent me on my way to Penzance. With a wistful back glance at Chy-Ser-Pren, I headed for Trewellard Arms and the bus stop.

I thought, “what the hell I am going home to”? Cuts to travel and transport in the UK had begun. My return flight on Icelandair had been cancelled. I got off lucky. I booked the last direct, full-service flight to Vancouver on Air Canada and nabbed a ticket for the National Express coach from Penzance to Heathrow a day before the service was to end. The rear cabin of the Boeing 777 was almost empty, as were streets and shops on my arrival. Thank God I was in good practice for 14 days of self-isolation.

Over the last weeks, my kitchen and pantry have often been turned over to English pub grub cooking. The fare is unfussy, comforting, and tasty made with accessible, affordable, and familiar fixings—culinary criteria for worrisome times.

I’ve mastered Yorkshire pudding. The batter puffs up in the oven, nearly touching the rack above, just like my mum’s did. Sunday’s roast beef and spuds evolve into Tuesday or Wednesday’s cottage pie. Smashed roasted spuds make a delicious crunchy topping. Leftover Yorkshire? Delicious, the following morning, heated in the oven (never in the microwave) with a splash of maple syrup. It’s nice to make fish pie on Friday. I’ve whipped up the curiously named toad-in-the-hole, by tucking bangers into a cake pan bed of any remaining (again!) Yorkshire batter. And bubble-and-squeak with leftover cabbage and mash. No decent pub menu would be without a “steak-and-kidney” pie. (You may want to omit the kidney. Not I.). I prefer a more brothy pie than one made with floury gravy. I have even ‘clotted’ some cream, which is quite easy to do. I’ve added Welsh rarebit to the roster. I make it “honest and proper-like” with purchased, not pilfered, Lean & Perrins Worcestershire and Colman’s mustard.

But I miss that cottage cooker.

Note: Social distancing took hold, and the pub shut two days after I left Pendeen. I wonder what Jim is doing. 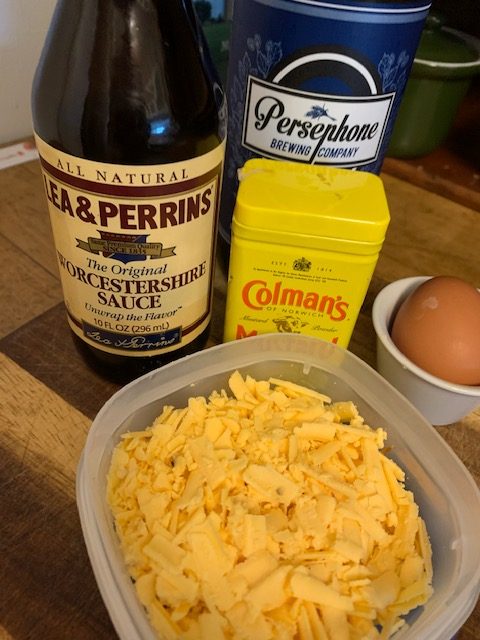 In a small saucepan over medium-low to low heat (depending on your hob), whisk the mustard and a bit of the beer to make a paste. Whisk in the remaining beer, butter and Worcestershire. Stir until butter melts. Tip in the grated cheese, continuing to stir gently until cheese is melted and the mixture is smooth. Do not let boil. Take the cheese mixture off the heat but keep warm. Be careful it does not congeal.

Lightly butter one side of the bread. Grill both sides, beginning with butter side up until golden brown. I like crusty granary bread—but sliced white or whole wheat is ok too.

Whisk egg yolk(s) into the cheese, taking care not scramble.

The mixture should be thick but smooth and silky. Pour the mixture over the grilled buttered side of the bread. Slide under the broiler until the cheese is bubbly and golden.

Enjoy immediately with the remaining beer or a glass of rustic red and a salad of peppery greens for lunch or light dinner. 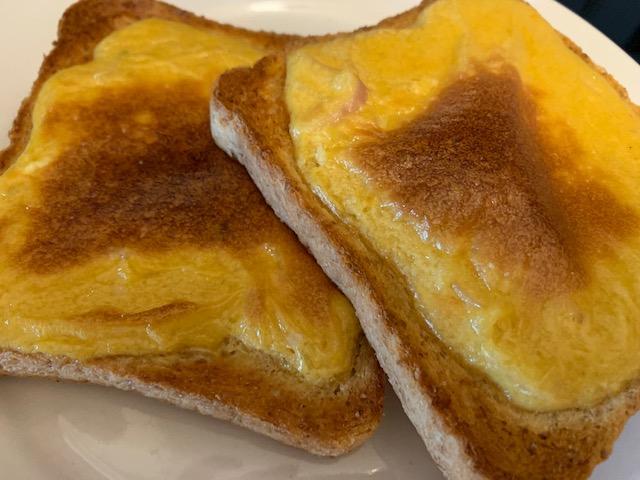 November | December issue on the stands. Read ...
Read More
For the ninth year in a row Rancho Vignola is setting up its Vancouver Island Harvest Sale here at the Mary Winspear Center in Sidney. Many of ...
Read More
Season’s Greetings EAT readers! We at EAT are looking forward to all the wonderful seasonal baking on offer around the city. One of the great joys ...
Read More
Masterclass Candied Citrus Holiday ...
Read More
Local Fare in an Urban Square   VICTORIA: Fernwood’s tastiest event, Fernwood Bites, is back for the fourth year in a row, on Sunday June ...
Read More