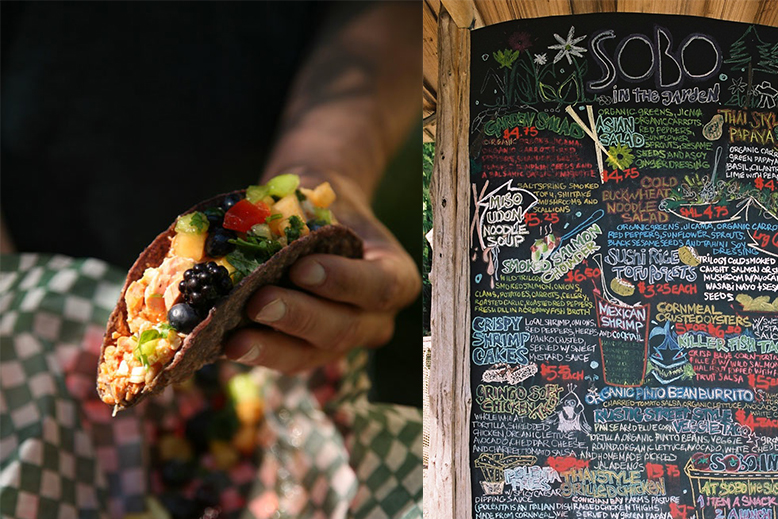 If you haven’t noticed, EAT is pretty excited about our upcoming Houseguest dinner series. You can read a little more on the genesis of the event here and RSVP to the first dinner here, which takes place at Spinnakers Brewpub on Sunday, April 19 at 7 p.m.

While we’re calling it a pop-up series, the chefs involved aren’t one-hit wonders. Our first houseguest is Lisa Ahier from Sobo Restaurant in Tofino. The award-winning chef—one of enRoute Magazine’s best new restaurants in 2003—fell in love with the West Coast after a vacation to the island. Fifteen years later, Lisa calls B.C. home.

I spoke to her about her journey to Tofino, the transition from operating a food truck to running a brick and mortar kitchen and her recent cookbook.

Kaitlyn: You’re from Texas originally and you trained at the Culinary Institute of America, how did you make your way to the West Coast?

Lisa: My husband and I were working in high-end private resorts in Texas and it’s hot in Texas. He’s from New Brunswick and I had dragged him around Florida and Texas for twelve years. It was time for me to reciprocate and let him get home, but New Brunswick was too cold. We had met in Florida on the ocean and Tofino is right on the ocean. It had the whole package.

K: You come to Tofino with a ton of restaurant experience, but you open a food truck. Why take the risk?

L: Late in life, I was fortunate enough to become pregnant. In my line of work, it can be a lot of hours. I felt like this was my one opportunity to watch my child grow up, I wanted to downsize my life. If the baby had a cold, I could close the truck for the day. This was 2003 and food trucks weren’t really around yet. They hadn’t burst onto the scene, gourmet food wasn’t happening in trucks. Chefs I knew in Vancouver were pretty taken aback when I told what my plan was.

K: Your menu features many international flavours and B.C. favourites like tacos and seafood, why go the casual route?

L: The menu isn’t necessarily what I always want to cook, it’s what I think my locals need and want. What will sustain them on a daily basis. We have an active, younger population who are looking for cleaner food that’s also affordable. The folks here are surfers and artists and travel the world a lot. They crave those international flavours.

K: I noticed the menu isn’t very meat-heavy. Was that by choice?

L: I was five years into Sobo before any kind of meat outside of poultry hit the menu. Most people come to Tofino for seafood and diners are open to trying new things. Vegetarian, vegan and pescetarian diets are just more prevalent these days.

K: What do you have planned for your menu at the Houseguest event?

L: I’m bringing one new item that I’m really promoting heavily which is the gooseneck barnacle. We’ll start with an amuse of barnacles. For those that are unfamiliar—you don’t see them on menus much—they’re usually sent to Spain and are just now hitting B.C. where they’re harvested. It makes perfect sense to introduce them to the island. Any my entire menu will be completely pescetarian.

K: What can readers expect to see in the Sobo cookbook?

L: Eighty percent of the book is from the restaurant and forty percent of that eighty percent is from my childhood. How I make my dishes is influenced by the history of my life, where I’ve travelled and where I’ve lived. Our local high school is using the book in their home economics class, cooking from the beginning to the end. If they have a question, it’s really helpful for me to note for my next book. It’s a very approachable book overall.

Lisa will be at Munro Books from 12-1pm on Monday signing books, and at Russell Books from 2 – 3pm.

Find out more about The Sobo Cookbook and read a review by EAT contributor Jeremy Ferguson here.

The article on L’Apéro in the May|June issue should have stated Chef Andrea Maiolo staged at The Courtney Room and Zambri’s and that he held the ...
Read More
May|June issue on the stands. Read ...
Read More
If you’ve ever been to The Marina Restaurant, then you’ve probably experienced a taste of their unbelievable desserts and breads. Possibly one of ...
Read More