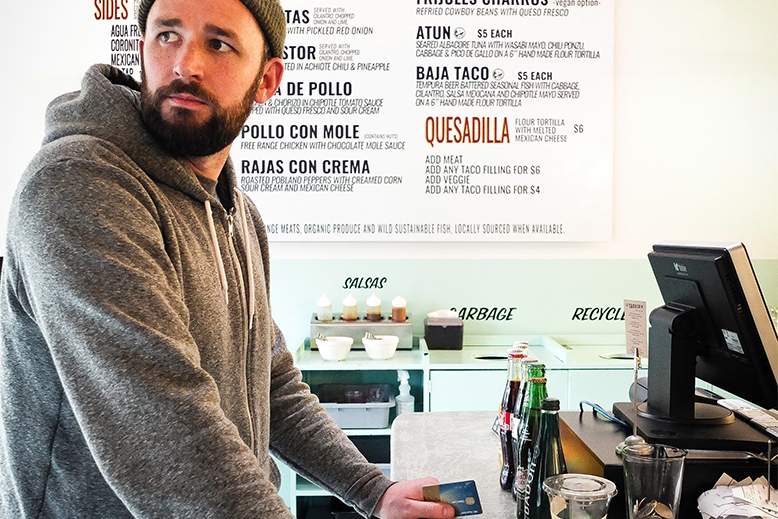 A few days before the official start of spring, Liam Quinn sat down at The Drake Eatery on Pandora Avenue to meet with a writer who was about to be 30 minutes late. In most cases, a chef who runs his own operation wouldn’t tolerate that kind of behaviour. He’d get angry at the writer for wasting his time and send a nasty text message to not-so politely tell him to screw off. Chefs are busy people. But that didn’t happen with Quinn. Instead, he sent a simple message that read: “I hope you’re okay.” It was his way of saying “hurry up” without being pushy, a shoulder shrug of acceptance without letting himself be a pushover—which is essentially the vibe he projects.

It’s not that Quinn isn’t busy. He is. Incredibly. As The Salt and Pepper Fox, he operates a lunch delivery business in which he makes pretty much everything from scratch with fresh local ingredients, assembles the lunches by hand and delivers them all over town himself, one by one—all (somehow) for around 12 bucks per order.

“Everybody is out there hustling hard and these things happen,” he says after the writer finally arrives. “Plus, it gave me a chance to have a beer and talk to these guys.”

By “these guys” he means the bartenders. Over the course of our meeting and interview, we’ll go from The Drake to La Taqueria to the Garrick’s Head Pub. And all along the way, the tall, tattooed Salt and Pepper Fox seems to know a version of “these guys” in every location. In fact, he knows them between locations. We get stopped multiple times while walking by people who are either friends or clients or colleagues, which is interesting when you learn that Quinn feels the local food scene in Victoria “can be a bit cliquey.”

“Food has always been a part of my life,” says Quinn .

Growing up in Halifax, he was surrounded by fresh food. His uncle was a fisherman. They’d regularly set up picnics and have lobster boils by the sea, where the family would feast on the local catch. “We’d eat two lobsters each and have a good time.”

In the eighth grade, his mom met a sailor and decided to take a chance and move her small family to Victoria. Arriving on the exact opposite coast from Halifax, Quinn felt like an obvious outsider, carrying with him the hallmark Maritime accent. But it wasn’t long before he started to build a community, playing in bands and at 17 years old, getting hired on at Eugene’s Greek restaurant.

“I never intended to be a chef,” he says without a hint of his old accent. “I was just a punk rock kid working to pay rent.”

While working at Eugene’s, he received a call from David Bohti, who would eventually go on to become a lifelong friend and collaborator. Did Liam want to come work at Pescatores? he asked.

“It really felt like fine dining to me at the time,” he laughs. “I was a bit scared. I had never really seen much better at that point. Anyway, I basically worked between both places for the next six years.”

At Pescatores, Quinn started to consider his future, as any young adult does. Questions about what was next surfaced in his mind, and at the urging of his sous chef, he was persuaded to go to the Culinary Institute in Charlottetown, P.E.I. But before he could do that, he needed to do some upgrading.

“I had dropped out of school to work in the restaurants, and I had to do adult classes to get my diploma before I could get in.”

Working two jobs and going to school, Quinn got a view into the lifestyle of a chef, which is never really a 9-to-5 job. There are almost always stupidly long days. But he handled it because he believed it was worth it.

“I thought the school was super-prestigious,” he recalls. “But when I got out there, I discovered it was really just a bunch of kids who didn’t know what else to do with their lives.”

Feeling somewhat underwhelmed, Quinn started looking for other opportunities. He applied for and landed a six-month internship at a restaurant called Waterloo House in the Bahamas, working for the first time with chef Justin Simeon. It was a lauded position that put the energy of being in a working kitchen back into his bones.

He never went back to culinary school. Connecting with Simeon was the first part of his years-long journey back to Victoria. Following the internship, he spent four years in Calgary, helping Simeon open a number of restaurants, including award-winning Rush.

“I don’t like to say I got burnt out,” he says of making his choice to leave Calgary and come home to Victoria. “I definitely worked a ton of hours and was tired, but I knew I always wanted to come back. It was just time.”

After returning to Victoria, Quinn decided to take a bit of a breather and just absorb the scene. He worked as a barista at the Parsonage Café, where he eventually took on the food program.

“It’s weird, though,” he says. “I’ve been back in the food scene for four years and I’ve done some big events since then and I run my own business, but I feel like a lot of people still think I’m just a guy who makes breakfast bagels.”

This is where the cliquey-ness of Victoria’s food scene comes into play. Quinn is a fixture in the local downtown community. He’s cool with “D-Boy” at Lucky Fortune Tattoo, he knows “Ketner” from Hey Happy, Jordan at Still Life, the guys at the record shop in Fan Tan Alley. Everyone likes him. He is affable and a good conversationalist. He’s an easy guy to hang around with and has an abundance of experience in food. But he still finds it hard to break through to the inner circle.

“With the more established food community, I feel like they don’t even know who I am,” he says, jokingly adding, “It’s like, do I have to wait for an invite in the mail to be part of the larger scene?”

When I ask him about that struggle, he laughs again. “You’re going to make me go there, huh? I think, basically, it’s really easy to rub somebody the wrong way or get on their bad side by doing something innocuous—but I don’t think there is room for that kind of attitude here.”

For Quinn, cliques or protectionism are not the way forward. He wants people to work together, quickly adding that that’s how we get to compete with food scenes in bigger cities. He is also proud of what he does and loves working in the community.

“If I’m competing with anyone, it’s Subway or whatever. A local food truck or restaurant? That’s not my competition, that’s my community.”

WHAT IS NEXT FOR THE SALT& PEPPER FOX

Toward the end of our evening (and, admittedly, after a few mescal margaritas from La Taqueria), I’m struck by Quinn’s quiet vision. He talks like a guy who has just kind of rolled with it all along, but there are hints throughout that say otherwise. He claims to be a guy who is “just slanging lunches,” but at the same time he talks of teaming up with his girlfriend, urban food garden designer Tara Campbell (who was heavily involved in the development of the Food Eco District in Victoria and runs a blog called The Nectar Thief) and getting a small piece of land to grow and harvest a lot of his own food. But before that happens, he plans to grow the Salt and Pepper Fox to a point where he can pay “respectable” wages and get his staff health plans, “probably over the next 18 months.”

My suspicion is that in the not-too-distant future, we’ll be seeing and hearing more of the Salt and Pepper Fox—and that the invite he has been looking for won’t be long coming; more likely, he’ll be the one sending them out.

—Photo and Story by Adrien Sala

Pictured Above: The Salt & Pepper Fox “getting his taco on” and helping welcome some newcomers to the food scene at La Taqueria.

The article on L’Apéro in the May|June issue should have stated Chef Andrea Maiolo staged at The Courtney Room and Zambri’s and that he held the ...
Read More
May|June issue on the stands. Read ...
Read More
Wild Sweets® By Dominique & Cindy Duby Recipient of 2013 Best Chocolatiers & Confectioners in America Awards   January 11, 2013 ...
Read More