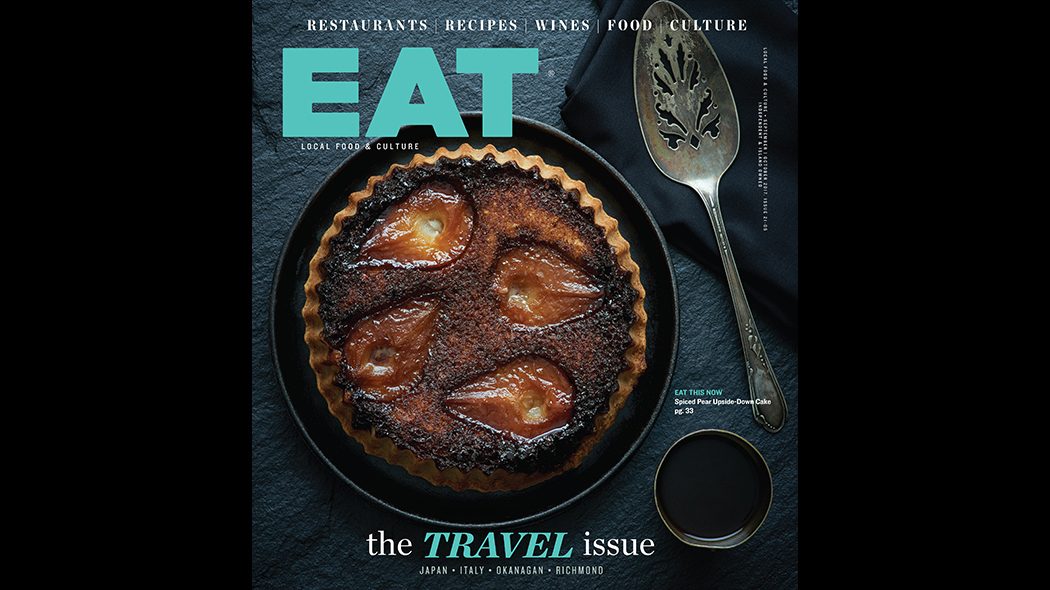 For me, fall is a time for travel. I long to get out there to discover new places, cultures, and foods. Leaving Vancouver Island during the summer months would mean I’d miss the sunny season with our fantastic local farm produce, serene blue ocean, and trips to the beach for picnics and swimming. But when the weather begins to turn back towards winter again, it’s the perfect time to pack a bag and hit the road. Visiting a city as it transitions from the crazed throngs of summer visitors to a city where the local inhabitants take back their neighbourhoods and re-start their normal routines is the time to go. Museums are less crowded, there are many more drink and culinary events to attend, and restaurants seem more welcoming and less hectic. It’s the best time of year to feel a part of the city rather than during peak tourist season.

In this issue, which I’ve dubbed our first ever Travel Issue, four well-travelled EAT scribes take us on their journeys—both far and near. Joseph Blake and Sol Kauffman head to Italy and Japan respectively. Joseph eats his way up the Adriatic coast of the boot and Sol goes on a ride-supreme along an ancient Buddhist route. Cinda Chavich and Shelora Sheldan stay a little closer to home; Cinda digs in and takes an extensive tour of Richmond, BC’s top hole-in-the-wall Chinese restaurants, considered to be some of the best outside of China and Hong Kong, and Shelora explores the Okanagan Valley to put together an insider’s guide (she lives in Penticton) to the Okanagan’s best, little known eateries. Come along for the ride; I hope it inspires you to make your own travel plans.

Welcome to issue 21-06, the Nov/Dec 2017 Holiday issue. It’s available at select shops, grocers, wine stores and restaurants around Victoria ...
Read More
The July/August 2017 issue of EAT is out and on the streets. Pick-up your copy today at your favourite grocer, deli, wine shop, café or book store. ...
Read More
The digital version of our May/June 2017 issue has been posted and is available to read here. Highlights You are Where You Eat – a travel ...
Read More
The March/April 2017 issue out and on the stands. Read the digital edition here.     Inside Seasonal Coffee Primer All Kinds of Meatballs ...
Read More
“GET FRESH” My recent visit to a master microgreens grower in North Saanich, where you are literally surrounded in new life, will give ...
Read More
READ NOW   INSIDE Food Delivery Oad Kee Mao The Food-Obsessed Physicist The Great Unifier: The History of Fried Dough Retro Comfort Food ...
Read More

September|October issue on the stands. Read ...
Read More
August 22, 2022 — Staff, volunteers, and board members from Victoria’s Belfry Theatre have raided some of the best local wine cellars to find ...
Read More
When a reader recently wrote in requesting this recipe from the archives, it reminded us what a great holiday dessert this is. You might want to ...
Read More